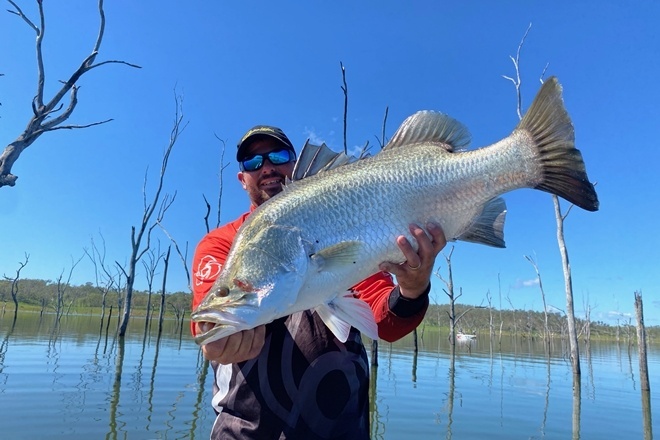 Competitor Terry Allwood was happy with this solid barra.

Monduran Anglers and Stocking Association held their inaugural Humminbird Lake Monduran Barra Classic on the 26th, 27th & 28th March 2021. Anglers travelled from all over the state and inter-state to compete for the $9200 in cash and prizes. The event was held in perfect weather conditions where the anglers competed in teams of two and had to catch a ‘bag’ of five Barra to be eligible for the first prize of $3000 cash. If a team caught more than five Barra, they could only count their longest five to contribute to their ‘bag’. Monduran Barra Classic

Twenty-six teams entered to showcase their skills. The event allowed for the everyday angler to test their skills against the best in the business with some of Queensland and Australia’s best anglers attending such as Craig Griffiths and Roderick Walmsley.Monduran Barra Classic

105 Barra were caught over the weekend with nine teams successfully catching their ‘bag’ of five Barra and being in contention for the major cash prizes. The overall winners were Jake & Bianca Stewart from Ballina with their ‘bag’ of five Barra (96cm, 98cm, 98cm, 100cm, 101cm) measuring a combined total length of 493cm to claim the first prize of $3000 cash. In second place was Matthew Mott and Dave Nelson with a combined length of 483cm. third place was won by Craig Griffiths and Jake Schwerin with 469 cm. Fourth was Rob and Tommy Wood with 461cm and fifth was Corey and Dean Gooch with a total of 456cm.

Tommy Wood caught ten Barra to win the individual prize for the longest total length caught by one angler with a combined length of 1106cm. A great effort Tommy! The prize for the longest single Barra caught was won by Jason Harwood with a Barra measuring 108cm. Nice fish!Monduran Barra Classic

Monduran Anglers and Stocking Association would like to thank their major sponsor Humminbird for their support. The support is greatly appreciated and certainly contributed to the success of the competition.

Competitors at the competition were the first in Australia to see the new 13 inch Humminbird APEX Sounder test unit as well other great products like the Mega 360, Solix Sounders and the BLA Marine Performance Series 150amp 24v Lithium battery and Terrova MinnKota all linked through Humminbird’s one boat network.Monduran Barra Classic