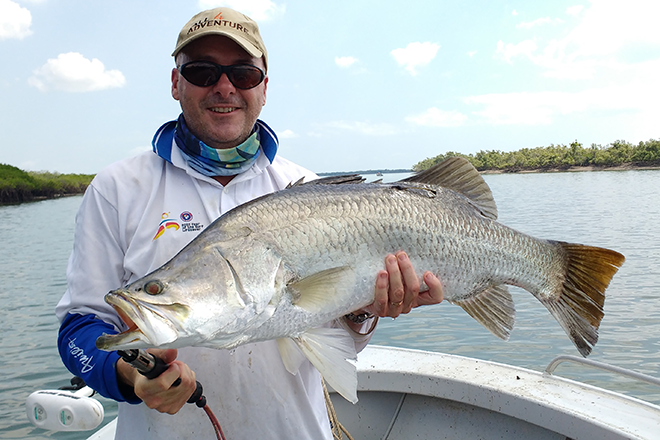 Steve Lund of Gladstone with a near trophy Barra caught at Port Alma.

Fitzroy River barra are getting better and better and for the first time in over 15 years the catch rate for legal sized barramundi in the Fitzroy River has exceeded 1 legal barra per fisher per day.

Bill Sawynok, manager of Infofish Australia that has developed the Crystal Bowl, said, “While the catch rate is much higher than forecast it is expected to fall over the season but could well stay above 1 fish per fisher per day.”

Mr Sawynok said, “While it is great to see all the fish being posted on social media it is also comforting that this can be backed up with hard data being collected through the Crystal Bowl.”

But not all the news is good. The climatic conditions in 2016 were not conducive for new Fitzroy River barra recruits. This year these fish should be from 300-450mm but are almost absent from catches. The recruitment for 2017 appears to be better than 2016 but it still likely to be moderate at best. If the current dry conditions continue then we may see another poor recruitment year.

Mr Sawynok said, “While the good times are here now we may see a decline in catch rates of legal fish in 2019 due to the recruitment failure in 2016 but it is too early to project that far ahead with any certainty.”

Mr Sawynok added, “Rockhampton Regional Council is leading the way by adopting the Crystal Bowl for its independent monitoring of the river. The real time monitoring and forecasting provides the Council and the community with the information it needs to make informed decisions.”