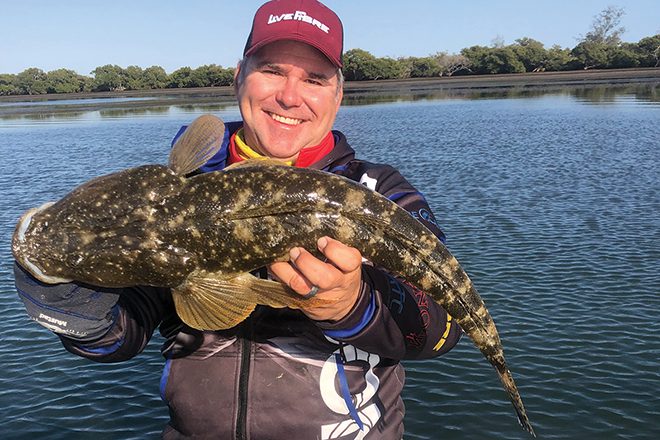 I’VE been a bit quiet on the writing side of things, with work once again taking precedence over fishing, and the days I made it to the water being nothing short of shockingly below average. Classic 2019

What can I say but that was an absolutely crazy and unusual lead-up to this year’s Gold Coast Sportfishing Club Flathead Classic 2019. Northerly and westerly wind dominated the weather patterns, the water around the Cabbage Tree, Jacobs Well and Jumpinpin areas where I usually fish was filthy and on top of that, that horrid snot weed reared its ugly head a couple of weeks before the Classic.

To say I was struggling to find fish was an understatement and to be totally honest my hopes in producing a worthy result for my team, Team Wilson, were somewhat dashed.

My pre-fishing consisted of checking the waterways from just north of the Pin through to the Nerang River, and I will put my hand up to say I didn’t land a fish some sessions and landed only one or two on others, with the best day being six with Leeann and the kids on board.

Dirty water that resembled my morning coffee plagued regular spots and a lot of time was spent just motoring around trying to pinpoint the cleaner water without even wetting a lure. Time was spent using different coloured lures, fishing both the shallows and the deeper water, but mostly time was spent looking for new ground.

I also don’t believe in flogging an area prior to the Classic and will often just arrive at an area, have a quick flick or troll and if I catch one, continue to the next spot. It’s also important to head out onto the water and fish the periods when it’s hard to catch a fish. Anyone can catch fish at low tide.

It’s when the tide is up that the thinking hats have to be put on to work out how and where to target fish during the ‘quiet’ stage of the tide.

It’s no secret what lures my team uses and in conjunction with Wilson Fishing, we regularly commit ourselves to online seminars, podcasts as well as talks in tackle shops and the like to help other anglers catch fish. Lure wise, Zerek Tango Shads in 50mm size are used for trolling, with 4.5” Flat Shads and 65mm Fish Traps the two go-to lures in my tackle box for casting and jigging.

Team Wilson didn’t have a chance to pre-fish together, however, I spent three days fishing with teammate Kord Luckus for a miserable total of eight fish!

We headed into the Classic with low expectations and if we pulled off six fish per day in competition mode, we would have been happy. On the plus side, the fishing had been tough for most people but teams were producing good numbers.

What a turnaround we experienced on day one.

Team Wilson is adaptable when it comes to different techniques and over the years of fishing together we have come up with strategies to fish diverse areas. With southeasterlies giving us favourable conditions, we began the competition strongly. Working as a team in these comps is so important, and Kord Luckus, Scott Fleming and I have gelled together quite well, fish together well and most importantly really enjoy the fishing.

Kord was the first to brain the fish on his favourite lure, the 50mm Tango Shad in colour BL with luminous crazy eyes, so Scott and I had to follow suit. Only problem was there was only one other BL Tango in the boat, so I rummaged around the boat for the marker pen and before long, we were all in the game landing fish.

After such a poor pre-fish, we were delighted to have caught enough fish to be placed in fifth position, 700 points behind the Lowrance Black & Whyte Boyz who are a team that consistently do well at the Classic.

Day two and we continued to consistently land fish and concentrated our efforts in the area from Millionaires Row to Five-Ways, keeping the fishing area contained to a small section to eliminate travel time between productive spots.

Team Wilson had a miserable start a few years back when we started fishing up north due to a good session the day before. Come comp day, we were burnt badly and though we caught a bloody good snapper, the flathead eluded us. Once bitten, twice shy, so we cut the travel time and concentrated on having lures in the water.

We were quite surprised to learn we had made it up the leader board to first position on day two, which meant a few teams had a bad day, not that we minded.

Day three was going to be make or break, with 10 teams in contention for first position as the score board was exceptionally tight. Once again we consistently caught fish, this time trolling over weed beds.

When trolling these areas, it’s important not to stir up the bottom with your prop because this can have a detrimental effect on the catch rate.

Having had the most abysmal lead-up to the Classic ever, we managed to hold onto our lead and take out champion team, with Kord making the top 10 in the anglers line-up.

It was a tight contest to the end, with only 442 points between first and fifth position.

Thank you to Graeme Wilson from Wilson Fishing for having faith in our team, the Gold Coast Sportfishing Club for putting on this amazing event and all the other anglers who took part.