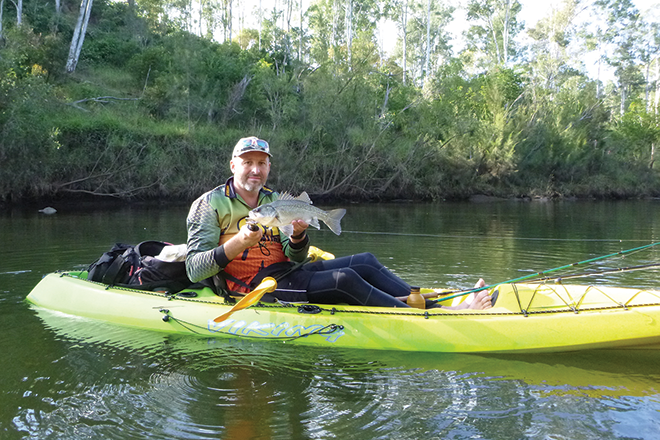 Fly fishing from a yak

I CAN struggle with fly fishing because my accuracy and casting distance are not great.

However, with practice I am improving and my catches on fly are now bigger and occurring more often, so I thought it might be time to share some of my experiences with waving the wand from a kayak. If you are starting out in this dark art of frustration, learn it standing up because sitting down adds a level of difficulty you don’t need early in your journey to becoming a fly fisher.

Since I learnt how to cast flies, the internet has become a thing and literally thousands of how-to videos are available to help you avoid the common errors in technique. Therefore, I will leave the basics out and concentrate on things that happen in the kayak.

Transferring from standing up to sitting in the kayak, I quickly found a few things that hinder the experience. The first is choice of clothing. When sitting, I had no end of grief from shirt buttons catching on the fly line as I shot the cast.

The next problem item of clothing was shoes, as most have something that will catch a loop of line and ruin a cast. Using a sun skirt laid over your lap can assist as a stripping basket of sorts and definitely made it easier for me when I was starting out.

I found using a broad-brim hat in rivers to be an issue, mainly because it hindered vision of all the overhanging trees I needed to cast around. Once I get better at casting in tight places that probably won’t be such an issue. The kayak itself doesn’t have any fancy modifications, and in fact, I don’t have a preference for any of my craft over another for fly fishing.

I leave off rod holders and keep the deck of my kayak bare for the fly line. If I take other rods, I don’t sit them upright in rod holders, I lay them down either in a hatch or secured along the side of the hull. My fly rods are over 8’ long, so I use a landing net with a much longer handle than I would normally use.

Even then, when I am trying to land a feisty fish my rod can get a scary big bend in it, especially when the fish decides to try to escape under the kayak. I have only seriously fished with fly in the fresh, mostly for bass and tilapia in impoundments and rivers.

As tempting as it is to cast forwards, I avoid doing so because when hooked up to a fish, the kayak offers little resistance to the fish shooting into structure and busting me off. I position the kayak side-on to where I am casting.

My skills at shooting the line out on the back-cast are poor, so I really only cast over the port side and that means I sometimes paddle backwards from snag to snag. I know it might look silly, but it works for me!
I used to avoid taking other rods with me when fly fishing, mainly to resist the temptation to revert to lures.

Now I do take a rod with a couple of lures only because there are always spots that I can’t get a fly into and skip-casting a soft plastic or hard-body lure deep into an undercut bank or overhanging tree ensures I get a chance to tempt a fish that might otherwise be inaccessible.

As the air and water cool during May, I find the bass become fussier about what they will attack, and a fly gently presented gets their attention more often than a fat bass lure plonked on top of them. I use either a floating or intermediate line with a lightly weighted clouser that will slowly sink while erratically stripping it back from the river fringes.

For my back-up spin rod, suspending bream lures such as Pontoon21 CrackJacks cast under grassy banks and retrieved with long pauses and tiny twitches get the best results. The waterways got a much-needed flush from the remnants of cyclone Debbie, and since Easter the Brisbane River and its tributaries have been fishing well.

Much of the weed choking some creeks and backwaters is gone, making them fishable again. Don’t forget to send your kayak catches in to have them featured in the Readers Forum. Just email your photos to ben@bnbfishing.com.au with your name and a few details.

Tom lives in Brisbane and predominantly fishes from his small fleet of kayaks. He enjoys hitting rivers and creeks chasing bass and cod as well as heading offshore to catch snapper when conditions suit. In 2015 he will be spending more time getting his two young boys into camping and fishing.
Previous Suzuki Marine warns consumers about fraudulent websites
Next Insights into boat insurance