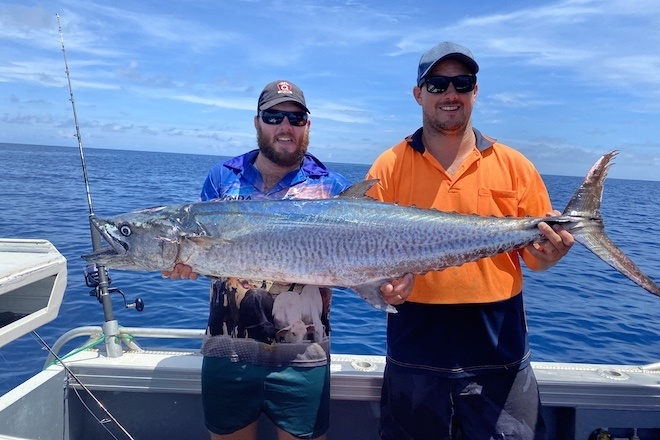 The author and Matt Arkell hold up a big mackerel which was caught while targeting dogtooth tuna.

LIVING on Thursday Island, I’m fortunate to be able to explore remote parts of Cape York and the Torres Strait regularly. One of my favourite species to target and cook up is the magnificent spanish mackerel, which has certainly been making headlines recently. Spaniards tick many boxes because they can be caught using a range of techniques, they grow big, look impressive, know how to get a reel singing and are great eating. mackerel numbers

I must say, as for many keen north-Queensland fishos, I’m having difficulty accepting the recent stock assessment that claims spanish mackerel are under significant threat and unsustainable. The reason being that spaniards have been at their thickest in around 10 years in the Torres Strait and around the tip of Cape York, as I’ve noted in previous articles this year.mackerel numbers

And at times they have been a pest because they take our shiny snapper leads when targeting reef fish. The latest data on spanish mackerel – which is actually based on new modelling –came as a shock to fisherman in all sectors. The East Coast Spanish Mackerel Working Group, who met on 17 and 18 May 2021 in Brisbane, noted the unfished biomass is below that of which a fishery is recommended to be closed (20 percent), according to the Sustainable Fisheries Strategy and under National Guidelines.mackerel numbers

While I’m all about sustainable fishing practices and justifiable regulations, it is hard to digest this information, particularly when we are having our best year on mackerel in a long time. I believe a lot more data and information needs to be collected before further limits are placed on a species that is crucial to both recreational and commercial fishers. Here are a few considerations.mackerel numbers

Blasted sharks! As with many others, I believe Fisheries Queensland should gather further data on how many fish recreational and commercial fishers lose to shark predation because the populations are now ridiculous. The shark imbalance is something fishos everywhere have jumped up and down about for many years.mackerel numbers

Even in remote areas of the Cape that see little fishing pressure, shark numbers have increased significantly over the past five years. Bull sharks and bronze whalers seem to have worked out that boats mean an easy feed – they are circling the boat even before a bait has been dropped, and it can be quite daunting to have numerous 2-3m sharks circling.mackerel numbers

Often there is no choice but to move on because so many good fish and too much expensive tackle are lost, which can be frustrating as we’ve usually travelled a long way to fish an area.