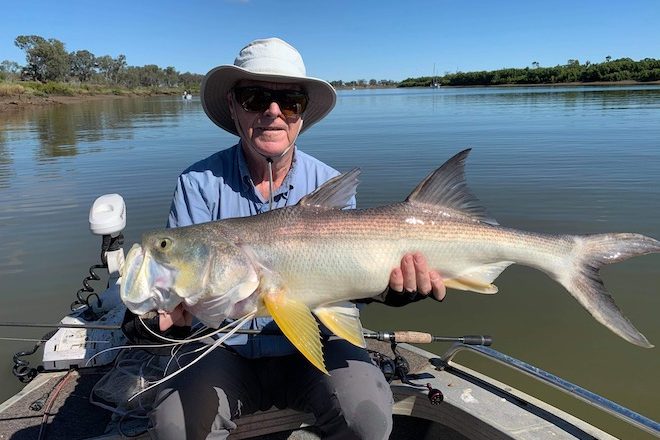 Gordon Baker with son Dan landed this super 1m threadfin near the town reaches of the Fitzroy River.

HOW time flies – it seems only yesterday we were dusting off the winter woollies and now it’s almost time to pack them away again. I believe we have been very lucky – we have received only a couple of fairly cold snaps but apart from that Jack Frost has been all but absent. This means we are probably in for a scorcher of a summer. I don’t know about everyone else, but I would say August would be one of the toughest months here on the Capricorn Coast. August capricorn

Obviously, barramundi and threadfin are more of a warm water species, so tempting them to bite can be quite difficult, particularly when water temperature falls under 20C. One useful place to try your luck this month is the town reaches of the Fitzroy River, especially in the afternoon. If you can get a midday low tide, the sun will heat the rocks and then bring the water temperature up.August capricorn

You could say the big rock bar in town acts as a giant heat exchanger. Throw in nice stable weather patterns and you might get a shock at what could climb onto the end of your line next. For quite a few people, fishing the town reaches of the Fitzroy is a no-go zone. They see all the rocks exposed at low tide and have no confidence to go there and explore.August capricorn

Though there is a safe passage if you stay on the south side of all the rocks. You can watch how the locals move about from the bridge. This is a great option to get your bearings as to where you can and can’t go. Just be careful on a big tide such as a full or new moon. Low tide can get down to .4m, which makes navigating difficult because many of the rocks are slightly under the surface.August capricorn

On a neap tide, your low might be 1.2-1.5m and this gives you an extra meter of water to move around in. You can almost go wherever you want on a high tide, and this is one of the best times to fish in town. The techniques I use to fish the town reaches are either to fish the edges, the bommies or current lines looking for transitioning fish. I have a fairly good idea which bommies will work depending on wind direction, however I’ll still do a lap around because the behaviour of fish will change from one day to the next.August capricorn