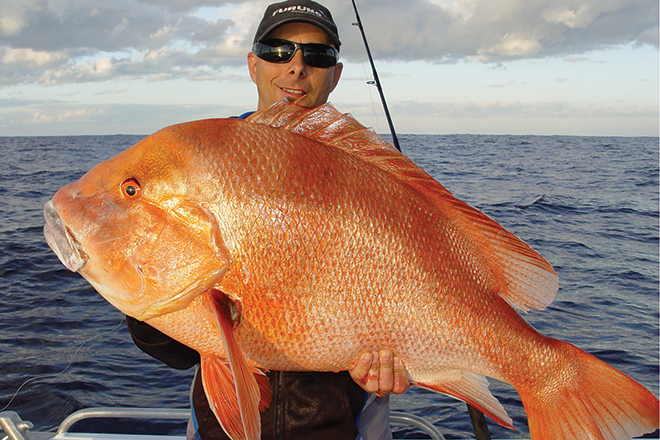 The author with a big 16kg red emperor caught on the first drift at a relatively new spot. Big reds like this can be once in a lifetime fish and the key to finding them is to fish small isolated rocks that see no fishing pressure.

WHEN it comes to big red emperor, we are extremely lucky that just about the best red fishing in the world can be experienced only a few hours’ drive north of Brisbane on the Fraser Coast.

Without a doubt, the Fraser Coast consistently produces some seriously big red emperor. Why is this so? My guess is it’s due to the tropical and sub-tropical water temperatures and the food sources available in the area. Over the years we’ve experienced incredible red emperor fishing and learnt a lot about these fish, which I’ve happily passed on to thousands of fishos.

There’s no doubt these fish are addictive and there’s not much to dislike about them. I’ve always said they’re not hard to catch, just hard to find, and for me the thrill of finding new rocks loaded with big reds is the ultimate goal in reef fishing. Finding these fish-rich spots is the hard part and what most people struggle with.

You need lots of time and patience when searching for small isolated rocks and ultimately finding that ‘pot of gold’. The easiest way to put it is you’re trying to find a needle in a haystack, so the more time you put in searching, the more you increase your chances of locating these special spots.

At times I can go a year without finding one of these locations and although I may have found 50 new spots that year, it doesn’t mean they will hold fish, and in particular good numbers of red emperor. On every trip I go out with the aim of not only catching fish but also thinking of future trips.

This means searching for new fishing spots that I believe have potential but need to be fished at certain times or in particular ways. On my last trip I headed out from the Wide Bay Bar with one spot in mind that I found last year. It produced a couple of reds before shutting down as the sun disappeared.

It was the perfect red emperor rock: small, isolated and in an area where I’ve caught good reds before. We headed through the bar late in the morning and aimed the boat east-northeast with my old man, Macca and Brett Seng on board. My usual deckie Foxy recently become a Dad with twins, so he will be out of action for a while.

Sorry Foxy, but reading this will be the closest you get to seeing a red for a while mate. About 40km out I ran over a huge school of bait, so decided to jig some live bait and see if we could pull a fish off it. We soon had a good selection of yakkas and slimies in the tank and the Furuno FCV-295 was showing a few larger fish around the bait as well.

Dad was first to hook one of these fish and pulled in a beautiful snapper to open the account. Brett followed with another snapper and then Macca with a goldspotted cod before the action slowed. I made my way further out and fished a spot that can produce quality reds at times.

It didn’t disappoint and we quickly pulled a couple of school reds before Dad was buckled over with a fish running hard and pulling a heap of line off his reel. We had no idea what it could be but as it got closer to the boat you could see it wasn’t a red but instead an absolute beast of a green jobfish that was promptly brought aboard.

Green jobfish are one of the meanest-looking fish in the sea and this fish was up there with the biggest I’d seen. With the afternoon getting on and the fishing slowing, we moved wider and I thought I would check the spot we pulled a heap of big reds off on the last trip. I ran over it and the Furuno sounder lit up like a Christmas tree.

I could see it had a good number of red emperor still sitting on it. However I wasn’t very keen on fishing it because I’d caught plenty of reds off it on the trip prior and it’s easy to damage these small isolated spots. But with the boys excited and the fact that so many reds were still on it, I agreed to have a drop.

I positioned the boat and it wasn’t long before all hell broke loose, with a three-way hook-up as soon as the baits touched bottom. Unfortunately, the boys’ lines crossed each other and we had a big tangle to deal with, which meant we lost one red while two others of 10kg and 12kg made it safely onto the deck.

We were using a selection of live baits and flesh baits but no bait seemed to be preferred over another. I couldn’t resist another drop and quickly went back to lower a live slimy down with a running 8 ball sinker, ganged 7/0 Mustad 7766D hooks and 10m of 55lb Schneider mono leader.

As soon as I touched bottom I felt a red starting to eat the bait. Reds have a distinct bite that feels more like a solid tug. I let the fish have it for a couple of seconds before sinking the hooks. I quickly knew it was another cracking red due to its solid head shakes and powerful runs.

Brett had also hooked a horse and was battling away in the corner. I know I’ve said it before but there’s no better sight than watching that red glow down deep make its way to the surface. They morphed into beautiful reds of 13kg and 11.5kg and there were smiles all round as the sun started to disappear over the horizon.

By now the current was roaring and about 13 knots of southeasterly wind was blowing, which made the sea confused and uncomfortable but still fishable. I drove away from that spot with the fish still biting and made my way out further to a spot that features a large overhang/cave and has produced trophy fish in the past.

The fish tuck in hard to the overhang, which makes it difficult to land fish and unfortunately you have to drop baits pretty close to it for a fish to take interest. I watched all three of the boys get to the bottom and within 10 seconds they were smashed and taken back into the overhang. 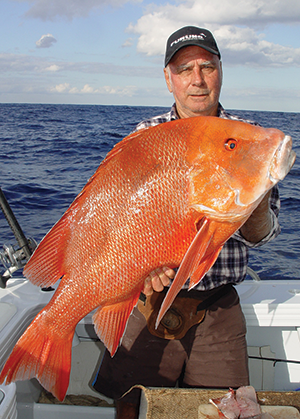 It’s pretty amusing to watch but still somewhat frustrating knowing we are losing quality fish. I moved on and decided to go and check out the rock I had found last year that I mentioned earlier. As I sounded over I was blown away that it had no life on it at all.
I was disappointed but as I’ve mentioned in my DVDs and articles before, small isolated rocks often see the fish life tuck in hard to the rocks at night to rest, which can give the false impression that it’s lifeless.

This trip was also around the new moon, which can often see the fishing become very slow at night. The boys went to sleep while I put in four hours of sounding around in the search for new ground. I found about 10 new small rocks and although none of them looked exciting, they would be worth a look during daylight.

I anchored up for the night to get some sleep and woke to good conditions and everyone ready for another great day’s fishing. We went back to the rock I found last year just in case it would come to life during the day. Well I’m glad we did because it was covered in big fish that looked like good reds (as pictured).

You wouldn’t know it was the same spot as the night before but it just goes to show what an open mind and a bit of experience can do for you. On the first drop we missed the mark a little because the current was roaring harder than the day before but as soon as Brett and I hit the bottom we were absolutely smashed.

We had line peeling from our reels and couldn’t gain any back even if we tried. Eventually Brett started to pull his fish towards the surface but my fish was being very stubborn and giving me plenty of grief. It’s at that point I started thinking of all the things that could go wrong.

Will a shark eat it? Have I hooked it deep enough to ensure the hooks don’t pull? You can run through a heap of scenarios in your head but you just have to keep a level head and do your best to land the fish. By now Brett’s fish had hit the surface and it was a horse red of about 13.5kg that was well and truly a PB.

My fish was putting in plenty of hard runs all the way to the surface, so I was hoping it was going to be a trophy red. The suspense as I looked over the side waiting to see colour was killing me but soon enough that red glow emerged and a cracking red of 16kg hit the surface.

This is what red fishing is all about and the quality of fish we had pulled so far was exceptional. The old man and Macca were keen to get back for another drift, so after plenty of pics I went back. When the fishing is hot like this it’s funny to watch how much everyone is concentrating and trying to quickly drop their bait to the bottom.

The next couple of drifts resulted in a beautiful blue maori cod for Brett and multiple red emperor, with Dad’s fish the biggest at about 13kg. I decided we had enough reds in the box and left them chewing to go and chase other species. We fished larger reefs with pilchards and smaller hooks, which paid off in the way of redthroat emperor, parrotfish and coronation trout.

I checked another large rock close by and Brett hooked a freight train that had him bent inside out. It was hard to call its species but it was big and giving a good account of itself. I was thinking, ‘surely it’s not another big red’. We waited for it to hit the surface and what do you know, it was another cracking red of 15kg and Brett’s third PB red emperor for the trip.

I suggested we make our way back in closer to target pearlies and try to avoid the reds. This is not something that happens often and is not a bad problem to have really. I arrived at the pearlie area and though there wasn’t as much showing as usual, we located a few fish and had a drop.

Would you believe it, the first fish caught was another red emperor. I had never captured a red in this area before but clearly we had some red mojo on board this trip. We persisted and managed a couple of decent pearlies to 63cm before pulling the pin and running through the Wide Bay Bar on dark.

If you want to learn how to target and catch big reds, be sure to grab our tutorial-based DVDs at wickedfishing.com.au
Until next time, tight lines.