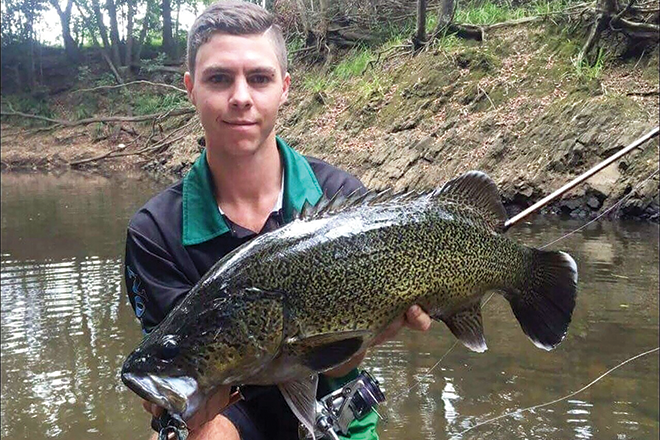 Keegan and a cod taken as by-catch while fishing for bass with a 1/4oz Cod Hound Spinnerbait.

The spin on spinnerbaits

SO many people ask me about spinnerbaits and their effectiveness on native Australian fish.

Some also tell me they own spinnerbaits but have given up on fishing them. The first rule of fishing should always be confidence in yourself, your gear and your lures.

If on your first cast you catch a fish on a spinnerbait I guarantee you that spinnerbait will become an instant favourite. A day spent fishing with a spinnerbait that doesn’t catch anything will probably see it ejected from your tackle box or sold on to someone else.

But why?
It’s not necessarily the lure’s fault.
Were you using it to the best of its potential?
Were the fish even active on that day?
Were you fishing in the right areas?
Was the lure in the fish’s strike zone long enough?

And don’t forget about the barometer and moon phase. All are variables that come into play when fishing. Being a fishing guide doesn’t grant me a magic wand to catch fish with, nor am I immune to the dreaded doughnut.

Unproductive fishing days happen to the best of us but generally persistence pays off. On slow days you may find yourself casting into a snag 300 times and on that 300th cast you manage to land a Murray cod.

Was it hungry? No, and it probably didn’t care too much for your colour selection either. But you harassed it enough to entice a reaction strike by consistently dragging your lure through its territory.

On the other hand, I have cast at structures in river systems for hours on end with nothing to show for it, only to see an electro fisher move in, pulse once and have a Murray cod over a metre float to the surface.

It’s a similar feeling to hooking a big fish that drops your lure a few seconds into the fight. The ‘what ifs’ start running through your mind thick and fast. Fishing is an education to a certain extent and will have you constantly changing your plan of attack while learning and becoming a better angler.

Spinnerbaits have given me great results over my fishing career and accounted for more than 60 percent of the fish I’ve landed.
I guess they are my thing because of the time I’ve dedicated to them. From catching cod, yellowbelly, bass and saratoga in fresh water to jigging up snapper and reef fish in salt water, spinnerbaits are very versatile but are generally dismissed as only a freshwater lure.

However, their ability is only bordered by your imagination. Over the years I’ve fished half a dozen spinnerbait brands and all have produced fish. When Last Cast Spinnerbaits emerged on the scene I was sponsored by Adam to use and promote his brand.
Adam was quite the wizard on an airbrush and his artistic finishes were second to none, grabbing the attention of the fishing community Australia wide.

It was no surprise to me when after talking Adam into making the trip from Canberra to Queensland to participate in the 2015 Australian Lure Fly & Outdoors Expo he won Australian Bladed Lure of the Year. With a big following already established, Adam sold his business to Rod.

After the change of ownership, I decided I would launch my own range of spinnerbaits and so Cod Hound Spinnerbaits was created. Because I spend a lot of time in rivers guiding clients, it wasn’t hard to get my lures wet and it didn’t take tackle shops long to start stocking my lures.

I have followed a similar path to Jason Cox of COD-X Lures where I don’t produce run of the mill colours.

Jason and I agree that the market doesn’t need more of the same old drab colours, and rather than cod seeing the same thing over and over, why not present them with something they’ve never seen before?

I’ll be honest. Ninety percent of spinnerbaits on the market will catch fish – even the cheap and nasty $2 Chinese spinnerbaits, but these spinnerbaits lack quality control and will fail after one or two captures or on that fish of a lifetime. This is where Australian-made spinnerbaits shine bright.

Their high build quality and smaller production lines ensure better quality control than most foreign competitors. And with so many great Australian spinnerbait brands on the market, why limit yourself to one brand? Choose the style, colour and blade combinations you like, don’t let anyone else tell you it has to be this or that.

I sponsor quite a few Murray cod Facebook pages and am blown away when someone asks which spinnerbait should be considered and only one brand is offered. It’s a bit sad when you consider plenty of other spinnerbait makers out there are making equally good, if not better-quality lures than some of Australia’s bigger makers.

I’m excited to see what the future holds for my spinnerbaits and surface lures. Jason Cox from COD-X Lures took the win with his Siamese spinnerbaits, which claimed 12 fish over the metre mark around the New England area in the first few weeks of their release.

Two incredible feats from a couple of blokes with small operations in different states. A massive thankyou must be extended on behalf of the Australian lure making industry to Garry ‘Fitzy’ Fitzgerald for creating and founding a platform from which to promote the high-quality cottage lure industry Australia has to offer.

Wade is a freshwater fishing guide based in Toowoomba. He is the owner and operator of both Cod Hound Kayak Tours and Cod Hound Spinnerbaits, and hopes to share his knowledge of all things related to catching Australia’s iconic freshwater fish species.
Previous Big red emperor on the Fraser Coast
Next Gearing up for summer species: how to target with lures (hard-body, plastic, vibes, poppers, stickbaits)