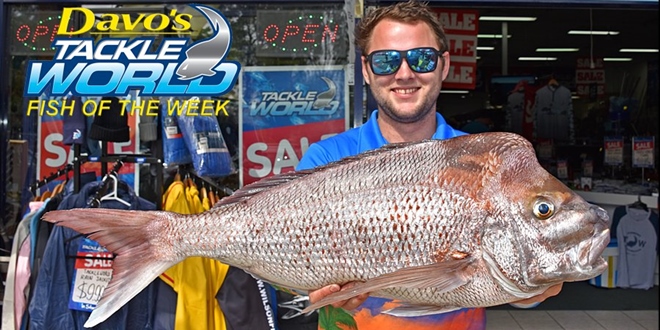 Jackson Ross won the $50.00 Davo's Fish of the Week prize with this 5kg knobby snapper from North Reef. Photo: www.fishingnoosa.com.au

The Noosa River has had a bit of a flush out with the rain last week, couple this with the larger tides, and this in turn has brought some extra food down the river and provided some cover for fish as the water dirties slightly. Mangrove jack have started to turn up in with some quality fish taken around structure along the sound and the upper reaches of the river.
Suspending lures like the Maria MJ Twitch are perfect as they will spend more time in the strike zone.
Up towards the river mouth the bigger evening tide has seen some great captures, Fishing soft plastics like Gulp 3” Ghost Shrimp, Zman 4” DieZel Minnowz and Atomic 3” Prongs have been producing the quality fish.
Hard body lures like the Halco 85mm Hamma’s and the Rapala Glass Shad Rap’s have also been producing the quality trevally.
First woods bay, current line and river mouth is where the good numbers of flathead having been caught and have also been responding well to soft plastics and fresh baits like mullet and live herring.

Upriver; both ski runs have been producing great sized GT’S and the odd threadfin salmon trolling River2Sea saltwater plugs and Jackson Flow Shad’s during the last of the run out tide in low light conditions.

With the offshore scene looking good last week, angler headed out with some great results. Earlier in the week Chardon’s reef was the place to be with quality cobia, pearl perch and venus tusk fish.
The weekend looked great with both wind and swell dropping, local reef like Jew Shoal and Hall’s Reef saw snapper up to 3kg being caught on micro jigs during the early hours of the morning and later afternoon. Further afield North Reef was inundated with a big school of yellowfin tuna.
There were some big fish amongst them with report of fish to 30kg. The Barwon Banks also fished well with quality snapper, cobia, pearl perch and gold ban snapper.
In the fresh water, Lake McDonald has been producing quality numbers of bass along the weed edges around 3 ways, bass and toga bay. Soft plastics have been working best.
Now for all the latest information log onto www.fishingnoosa.com.au for up to date bar and fishing reports and don’t forget to drop into Davo’s Tackle World Noosa or Davo’s Bait &Tackle Northshore at Marcoola to find out what’s biting and where, and remember Tight Lines and Bent Spines!