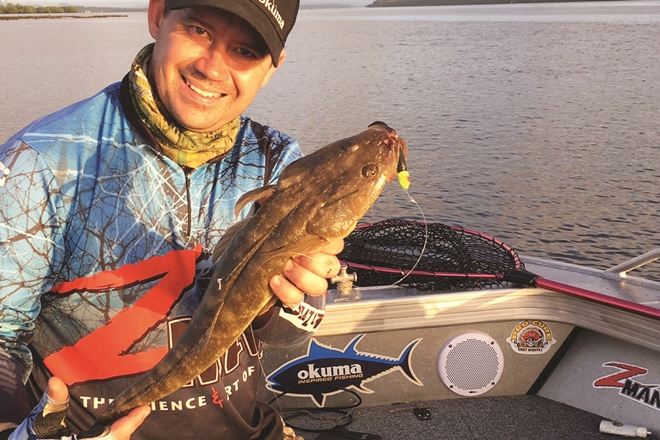 The author with a mid-40cm flathead.

IF you’ve been on the east coast of Queensland in early 2020, it shouldn’t come as a shock when I say we’ve had a lot of rain, providing a solid freshwater flush.

The southeast Queensland estuaries changed from the nice clear water we enjoyed for ages to a brown tannin colour as far as the eye can see. It’s not all doom and gloom when it comes to fishing though, as a lot of systems rely on a good freshwater flush.

When speaking to local anglers and the wider coastal community, everyone tells me we need it and still more, with little substantial rain for a few years now. The creeks and tributaries had been slowly silting up, and to add to the argument of needing rain, crabs and prawns rely on a good flush to get them moving throughout the estuaries. On a different note and something that I didn’t know until a recent trip up to Mon Repos near Bargara, even the turtles coming up the beach to lay their eggs are impacted by drought conditions.

The rangers explained that a lot of turtles have been coming up the beach, only to return to the water without laying because the sand dunes don’t have the required moisture content. So, though a large freshwater flush can be frustrating for the recreational fisho hitting his or her favourite spots, on the whole, a big dumping of rain is a good thing. Two things I’ve focused on while fishing my local estuary are the locations and my presentations, as both play a big part in landing fish despite an influx of fresh water.

The most obvious locations to persist are those with a lot of fresh water. Just because the clarity of the water has changed doesn’t mean the fish have moved on. As I mentioned earlier, the bait (fish, crabs, prawns) just get flushed around. With this in mind, you should always be on the hunt for areas that are holding bait or have the potential for bait to be flushed past like a buffet.

Two locations I fished recently were discoloured by the freshwater flush, and instead of moving on I chose to run darker-coloured presentations in Z-Man 3” MinnowZ and Slim SwimZ, along with a presentation that would act a bit like a crab, a 2.75” TRD BugZ. Because the day was a little overcast, running these darker colours or those with UV-reactive qualities often works a treat. I’ll talk more about colours and patterns a bit later.

The area I chose to work had very distinctive sections the bait was getting funnelled towards. The first spot had the tide banking up against a shoal of oysters and small rocks, creating a nice back-eddy. Even with the fresh, this looked promising. The second area was a section of deeper water (3-5m) that had two distinct drains flowing into it.

This was very easy to spot because the dark water was being discoloured further by the muddier freshwater sediment being flushed out. Both these areas produced eating size flathead and the bream kept it interesting on light gear. It is worth noting both locations had bait flicking on the surface and my sounder also showed a small amount of bait.

To help increase my bite rate, I follow the flush of the tide. This is a successful technique I use when a lot of rain has fallen. Having access to a watercraft helps, however with a bit of planning you can make it work after a freshwater flush even if land-based. On low tide I’ll head out to where the push of the incoming tide is making its way past structure, including weed banks, mangroves and rubble patches.

The new flush of the tide has cleaner water and often fires the fish up. Once again on another trip I tried a couple of spots, the first being a rubble patch in 8-10m that produced smaller reef species such as cod and snapper, with the occasional eating size sweetlip coming to the party.

The second spot was a little rock bar in about a metre of water that had cleaner water pushing past it. I opted for a Z-Man 2.75” TRD BugZ rigged on a TT Lures NedlockZ jig head with the idea being to throw the BugZ upstream of the rock bar and get it to imitate a small crab or squid drifting past.

It is safe to say we were on a winner with this technique because it produced a steady flow of bream ranging up to mid-30cm specimens, with the occasional long-tom coming in for a chew as well. The water in this area was very clear compared to the rest of the estuary and once again it was holding lots of bait.

Over the past few years I have developed a milk run of spots that produces quality fish time and time again. Having favourite lure patterns and presentation goes hand in hand with locations that have produced quality fish for you in the past. Have you ever gone fishing and done everything right and not even had a look in for your efforts?

Often it is because the fish aren’t tuned in to the presentation. With the freshwater flush hammering my favourite spots recently, it was time to step away from my favourites. Imagine lying on the bottom of the area you’re fishing and looking up at the bait. On a bright sunny day in crystal-clear water, the bait is going to be bright or clear looking. Do the same thing in strong current and with less water clarity after a freshwater flush and the bait is going to appear darker and as more of a silhouette than an actual colour.

In the locations I mention above, I used three different presentations, all in a darker colour or with UV-reactive qualities. My three presentations were a Z-Man 3” MinnowZ in Hot Snakes colour, a 2.5” Slim SwimZ in Green Pumpkin and a 2.75” TRD BugZ in Hot Snakes and The Deal. On this occasion they were all rigged on pimped-out TT Lures jig heads: Big EyeZ, DemonZ and NedlockZ, respectively. Who doesn’t like a pimped-out plastic!?

Though I caught fish on all of them, the standout was the 2.75” TRD BugZ, and with the number of crabs and prawns being flushed around the place, it wasn’t hard to see why. In the water and resting on the pause, this presentation looks like a crab going about its business. When held up off the bottom with a shaking retrieve, it looks like a small squid.

In the way of scents, I always add something. I have tested the reaction with my daughter’s fish in her tank and there was definitely more interest in the presentation with scent added. I always run Pro-Cure scents on my plastics and let’s face it, when the bite is tough, this can be the game changer between getting a bite or not.

Finding fish when the system is getting smashed with a freshwater flush isn’t that much different to when conditions are normal. Find areas that hold bait and keep an eye out for the weed bank edges, rocks, pylons, jetties and basically anywhere that is going to provide shelter for the bait.

Locations still covered in fresh are a little slower, and you really need to work an area and slow your retrieve right down to tempt a bite. Slow rolling the plastic with long pauses can make the difference and produce fish. In areas with cleaner water, the fish can be much more aggressive and keener to hit the presentation.

Overall, the freshwater flush has been a good shake-up for me to explore new ground and tune in to areas I normally don’t fish. Below is a list of my gear used on these trips.