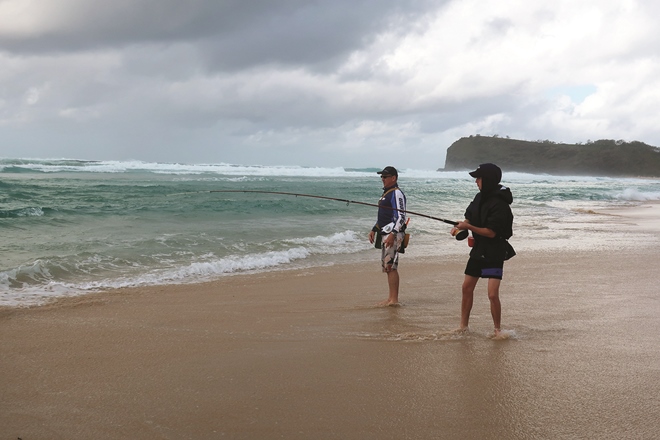 The author’s son landed a nice fish in a moderate southeasterly wind with a shore dump.

IN all fishing styles it is often the small things we don’t realise we are doing wrong that cost us the most fish.

This can all change when we learn from the good days on the water and think about why and how we got things right. Last month I covered what to do and not to do in relation to beach whiting tactics, including locations and tackle. This time we are going to cover the dos and don’ts in relation to techniques and bait choice.

Technique – what not to do

An important lesson for any species and style of fishing is to adapt your fishing techniques to the location you are fishing. Some people mistakenly assume if you fish for a particular species one way, that same technique applies for wherever you target them, including the beach. Not so. Whiting is one such species.

Let’s take the example of the estuary angler who tries to replicate their successful technique from the estuary to the beach. This hypothetical angler is a regular whiting angler in the Coomera and Nerang rivers. While lobbing a whiting rig with a 5 ball sinker in 3m of water at the edge of a sandbank might work in fast-flowing rivers like the Nerang on the Gold Coast, it doesn’t mean you should apply that technique to the beach.

One of the biggest mistakes I see beach anglers make is applying these deep-water techniques to the beach. They lob their bait out as far as they can to the deepest part of a hole or gutter with a thumping great ball sinker. The bait is anchored to the spot in an unnatural manner in a part of the gutter that will only see species like big dart patrolling it during the day. The other thing you want to avoid when employing beach whiting tactics is casting and letting your bait sit when the fish aren’t there.

This applies even if you are fishing at the right part of the gutter, say along the edge of a shallow sandbank dropping into a shallow gutter or just behind the shore dump. If the fish aren’t there, don’t just sit and wait! Likewise, while persistence can pay off in many aspects of life, persisting in the same gutter that is not producing fish (during the peak time of the tide) is not a wise strategy.

Technique – what to do

The secret to the right technique when whiting fishing is adapting to the beach environment. One of the great beach whiting tactics popular with many anglers is casting and retrieving. Whiting prefer a moving bait, so you want your bait to appear as a live worm or yabby trying to flee. No reel does this as smoothly and slowly as the Alvey sidecast, and as an added benefit, if you feel a timid bite, you can wind backwards on the Alvey to give the fish more line.

Long traces with the lightest sinkers possible also allow your bait to move around naturally in the current and the less resistance a fish feels when it picks up the bait, the better. There is an odd exception to this moving bait rule though.

No matter your technique, if after 10-15 minutes you have caught no fish, or the fish stop biting, move to the next gutter of similar formation. Given the small window with the tides, it is best to have scoped these spots out beforehand so you know how far you have to travel between gutters to employ your beach whiting tactics.

Beach conditions – what not to do

I’ve seen some anglers disregard many beach whiting tactics and simply swear black and blue by the solunar calendar and fishing ‘peak times’. I’ve no doubt the bigger tides around the lead-up to the moons play a part in bigger and more whiting biting, because my fishing diary has proven this over many years. However, to stubbornly stick to fishing the predicted peak times regardless of fishing conditions is not wise.

For example, anglers can’t expect good fishing for whiting when big seas and swell are rolling in and stirring up the sand and making it extremely difficult for the fish to forage without being thrown about. Likewise, in the calmest glassed-out days on the beach anglers can’t expect whiting to be in the shallows right by the shoreline with birds overhead, four-wheel-drives roaring past and anglers in clear view.

Beach conditions – what to do

The solunar calendar should be just another tool in the beach whiting tactics kit, but not the only or most important one. Beach conditions, in terms of swell, seas, wind and water temperature are also of critical importance to the fish. Off the beach, a light to moderate southeasterly swell can bring the whiting in close to shore to feed under the cover of a gentle ripple on the water and protective cover of foam over where they are feeding.

Likewise, warmer water from a change in wind direction can hit the switch for whiting after days of northerly wind have brought in colder water to shore due to the coriolis effect. Finally, as mentioned in part one in March, in periods of glassed-out conditions, anglers should look for nearby structure in the form of rocky outcrops or beach corners that will hold cover and protection for the fish and attract baitfish.

Baits – what not to do

You can choose the right location, have the right gear and even use the right technique, but it can all amount to nothing if you use the wrong bait. Summer or yellowfin whiting are much fussier in bait choices than their winter whiting counterparts. For this reason, common winter whiting baits such as frozen prawns and squid will not cut it on the beach for quantity or quality.

Even common beach baits like worms and pipis are inferior if they’ve come out of a freezer. The other problem I see with people fishing the beach is bait presentation. A squashed-up glob of worm around the gape of the hook just does not present well to the fish.

Baits – what to do

Forget the frozen bait when you are employing beach whiting tactics. The best bait without doubt is live bait. Live beach worms and even live bloodworms are awesome, despite the latter not being a natural bait of the beach. Likewise, live yabbies will do well but are harder to keep on the hook in the waves. Pipis are a good back-up bait but will tend to catch more bream and tarwhine than whiting.

If you can’t catch or access live worms or have access to the other baits mentioned, frozen beach worms are the next best bet. However, their quality will really dictate their success. The frozen worms one well-known bait company distributes are usually black, thin and sloppy not long after they defrost.

Don’t waste your time if the frozen worms are thin and a dull grey or black when frozen. Instead, look for firm and thick beach worms covered in a red dye. These look much more natural and stay on the hook heaps better.

Finally, presentation of baits is critical for beach whiting. The best way to present a live worm or yabby is to thread it along the shank of the hook and over the eye so it sits nice and straight and not clumped. Add some pieces of red tubing above the hook as an added attractant for the fish.

I hope you got something out of this two-part beach whiting tactics series.

Until next time, I’d love to hear any feedback on my articles and posts on my Ontour Fishing Australia Facebook and Instagram pages.

Sean caught the fishing bug bad one very cold Canberra day 20 years ago when he was bored and picked up and read Angler's Almanac by the fireplace. Since then he has filled his mind with knowledge from fishing magazines, books, the internet, TAFE fishing courses, guiding fishing charters (estuaries, beach, bay and mountain lakes) and of course 'on water' experience. He and a group of mates formed a social fishing club and soon started to share what they learnt and caught online. Sean is the admin for Ontour Fishing Australia on Facebook, which is a page that shares information, reports and sponsor giveaways and welcomes all to the site. He plans to move into blogging on his new website when time allows.
Previous Inshore coral trout fishing firing up on Sunny Coast
Next May 2020