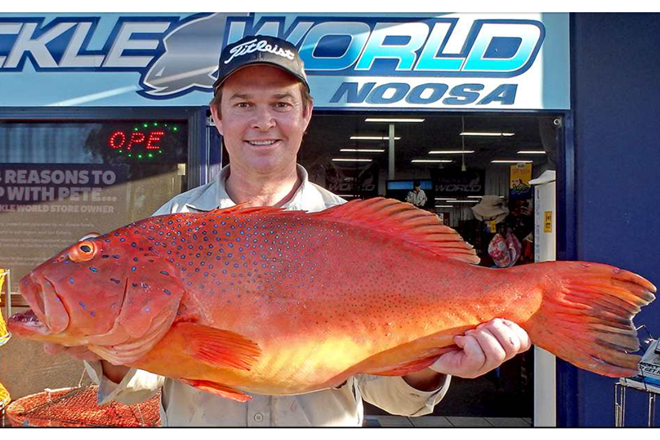 Justin Sykes from Tewantin (above) struck gold at North Reef on Wednesday morning when this 9kg bar cheek coral trout tried to run off, unsuccessfully as you can see, with his pilchard bait. Photo: www.fishingnoosa.com.au

Well it’s definitely on! For many anglers the ability to wet a line has been easier than ever before. For now we are lucky enough to be able to go for a fish for food and the weather gods have smiled down too. The light winds and the increasing trend for winds to feature more west will see the seas calm down and the pelagics take advantage of this. We are now in a period where we are in the lead up to the new moon and the fish are feeding hard.

Out wide bigger boats have been pulling up big snapper from the cooler water along with jewfish, cobia, longtail and some great reef fish including tusk fish and pearlies. Big 8-10 ball sinkers on 4-5/0 gangs has been doing the damage with big pilchard and squid baits.

Inshore reef fishing is also coming alive with some big coral trout making their presence known up and down the coast. These fish are masters of the reef and will turn their heads and brick you before you know whats going on. Loading up on live bait with a live bait jig is a must if you are after one of these inshore coral trout and the many lumps of Sunshine reef are prime ground. Other inshore fish hiding out here with coral trout include snapper, pearl perch, sweetlip, cod and tusk fish to name a few.

Inside along the 10-20m line the continued run of Spanish, spotty mackerel and longtail tuna are giving many a good arm stretching. With mackerel tipping 20KG plus and longtails not too far behind, now is the time to chase some of this fine fare. Mackerel are taking slow trolled dead baits of slimy mackerel and whole bonito on big troll or gang hook rigs. If bait isn’t your thing then take a look at Nomad DTX lures even down to the small 85mm model which dives to a whopping 6 meters! This is a great option for when the fish are feeding on smaller baits.

Surf fishing is ticking along nicely with smaller whiting, bream and dart keeping the daytime anglers busy. Off the headlands with the reduced swell some anglers are reporting smaller jewfish in the run up to the new moon. These fish will take a range of baits from live bait to squid, mullet and pilchards. Giving these fish time to take a bait is the hardest part of hooking one as they will play with their food for what feels like an eternity so be patient. It is important to reduce the time smaller fish spend out of water if you intend to release as they give their all during the fight.

In the river smaller jewies can be found anywhere from Woods bay to the ski run and beyond. The small bull sharks in the river love a good chunk of jewfish so try and get your fish to the boat quickly. Look for schooled up fish near tightly balled up schools of bait and have a try with soft plastics in the 3-4 inch size and 1/4oz jigheads on 10-16lb DFC leader.

Around the river mouth you expect to find some solid flathead, whiting, bream and the odd trevally. The Jigpara micro jigs have been claiming a wide range of fish and if fishing light there is no better jig. For bait anglers jump onto some live worms and catch a feed of fresh whiting.

Mangrove jacks are still around however we are getting close to the end of what has been a bumper season. Live baits work exceptionally well but fresh mullet works a treat and with a recent arrival of some fresh mullet be sure to come into the store and ask us how we fish it.

Mud crabs are certainly coming out to play with strong reports of big muddies all along the coast. Find that mangrove edge or drain and with some mullet heads be sure to anchor pots down as we approach the spring tides. Lastly don’t forget the new possession limits of no more than 7 crabs per angler applies in Queensland and males only.

Previous Tackle to use for fishing the Bundaberg region
Next Beach whiting tactics part two: technique and baits