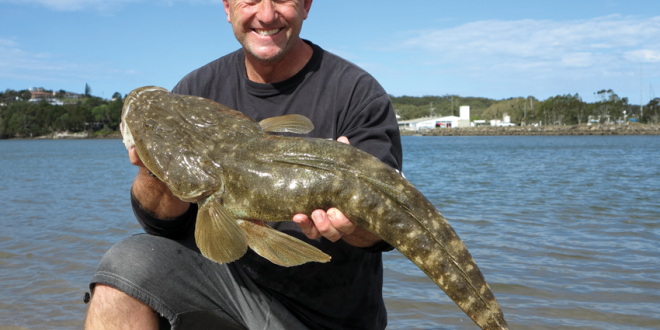 Pete Quaas with a 99.95cm flathead caught on live yellowtail in the Evans River.

ROCKTOBER has come and gone and now we are into Movember. Where has this year gone? I think I say that every year, but it really has flown.

The great thing about this is we are fast coming into summer, which means warm-weather whiting, bigmouth brown bass, dart and topwater bream fishing. Yep, I’m all for summer and what it brings. A hell of a lot of people will be surfing, riding jet skis and of course swimming, but not this black duck because I know what fish do in water, so I’m all about fishing only.

And besides, if God wanted me to swim he would have given me fins instead of feet. Well that’s my story and I’m sticking to it.Before I get stuck into this month’s report, NSW Primary Industries Minister Katrina Hodgkinson has announced changes to recreational fishing rules after a comprehensive consultation process.

As a result, a total of 16 changes to bag and size limits and gear will come into effect from November 3, 2014. Ms Hodgkinson said these modest changes will apply to recreational saltwater and freshwater fishers and were supported by the majority of people who made submissions.

Ms Hodgkinson said of the 16 changes, five include minor rule adjustments to reduce red tape and streamline fishing rules. She said the NSW Government is absolutely behind the more than one million recreational fishers who wet a line and contribute over $1.6 billion to the state’s economy each year.

Now I’m all for bag limit changes, and who needs 20 of each species, but I didn’t see anything about pro fishers and limits. I know they are in for a bit of a shake-up but they can still drag nets to catch tonnes of spawning bream from beaches over winter, they still plunder jew stocks, and I won’t go on about the blackfish they receive bugger-all for and need to catch tonne upon tonne of to get a pay.

I’m not having a go at pro fishers as they are not doing anything illegal. We all have to make a living, but we need to get a quota system in place or reduce the number of pro fisher licences and make it more profitable for the pros who hang on. Less product on the market will cause prices to increase, meaning pro fishers will make more money. A quota system will work the same way. Less is best, with no waste.

Then every bit that goes to market will be sold, so there’ll be no need for product to become cat food and fertiliser. We are still having dramas with the Greens trying to put pressure on the Government to re-close existing marine parks, which are open to fishers from banks only. I really don’t know how to get rid of these bloody rabbits, but with $1.6 billion being spent each year by fishers in NSW it makes you wonder.

If the marine parks are closed again and the Greens members get what they want and yet more parks are put in place, where will the Government pick up the lost revenue? 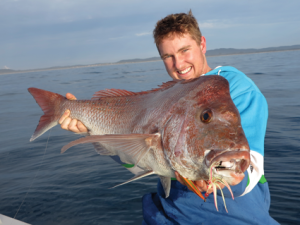 And with thousands of jobs on the line, creating more parks and closing existing ones will mean longer queues for the dole.

Do the Greens really want NSW to become another Tasmania, which has just about become a welfare state. How many jobs has this radical group cost with its impact on the forestry industry, marine parks, state forest closures and wanting to close the mining industry? Green councils have stopped people clearing land in case of fires, and we have all seen the devastating consequences.

The list goes on and on, but we need to stand up and stop the rot now before any more crap happens.

Recently I had the chance to fish the North Coast Fishing Bonanza at Ballina. I have not fished in any competitions for a while as these days I’m not interested in fishing hard.
Well, when I say hard I mean in terms of a comp where you fish and play hard.

I just want to have fun and that’s what this event was all about with its family orientation. Mind you, if you wanted to be on stage for daily species prizes or as the overall winner, then you had to fish hard. And some did, with a number of very big fish caught on camera.
That’s right, it was not weight but overall length that decided the winners.

I bass fished for two days and then that was it, my lungs had had enough and decided they wanted a rest. I landed 30 bass and the biggest was a tad over 40cm but I wasn’t in the running for a stage appearance. However I also caught flathead and bream in the Richmond River all the way up at Coraki.

Most of my bass came from Woodburn Reef on blades. The ones I caught around Coraki were on Bassman Spinnerbaits in black and orange colour. They didn’t seem to want to play further upriver. The North Coast Fishing Bonanza is a well-run comp and you should stick it in your diary for next year.

It’s a four-day event held over the September school holidays, and with over $100,000 in cash and prizes I will definitely be there again next year. I can honestly say I’ve never seen so much stuff given away, and I mean tossed off stage into the crowd.

Hats, shirts, stubby holders, braided and fluoro line, Engel cooler bags, Atomic lures and Gamakatsu hooks – the list goes on. This happened every night, and then there were the random draws in which you could win a Lowrance sounder (not a cheap one, a model worth $1000 or more), an Engel fridge/freezer, Shimano rods and reels, Penn rods and reels, Samurai Reaction rods and much, much more. And as I said, this was just random stuff.

Standout fish included a 1.6m dolphinfish that hit the deck and then in the turmoil a set of gang hooks ended up in the fisher’s shin, and a big flathead of 99.95cm hooked by Pete Quaas, who was stoked to say the least. This fish was tempted in the Evans River with live yellowtail. Another impressive capture was a really solid snapper of just under a metre caught off Evans Head by Brodie Quaas.

Pete and Brodie were representing Shimano and Lowrance and won the teams event. Shimano sponsored all the junior prizes of rods, reels and sample bags. So thanks Shimano and well done.

The nightly adult prize pool was sponsored by Penn, and Samurai Reaction rods were given away at the end of the comp. I have to thank Dave Moss for his Reef Science tank – what a great setup. Thanks also to all the sponsors, and with a comp of this size new sponsors are always welcome. Trust me you will get plenty of bang for your sponsor buck at this well-run event.

I must put in a word for Mick and Jay who did all the microphone work and kept the crowd enthused; well done guys. And to all the hard workers behind the scenes – a big thankyou to you too. The Bonanza has 14 fish categories for adults, nine for cadets (12-16) and six for juniors (12 and under) as well as overall men’s and women’s category champions, team champ and cadet/junior champ.

All classes were hotly contested, with money and sponsored products up for grabs. At the end of the comp a complete boating package for inshore or close offshore fishing consisting of a great Tabs boat with an Evinrude E-TEC and trailer was given away in a random draw. All you had to do to have a chance of winning was enter the comp; you didn’t even need to fish.

For the juniors/cadets, another Tabs boat, Evinrude E-TEC and trailer package that would be perfect for the estuary was given away. A Hobie kayak, Lowrance HDS sounders and Engel fridge/freezers were given away as well, and I lucked out and won an Engel.

Whiting and bream have shown up on the beaches and a few tailor are still around, along with school jew in some of the bigger gutters.
The Evans River is fishing OK up past the Iron Gates, and the area around the bridge on the yabby flats is producing whiting, bream and flathead. You will also find whiting and small bream in front of the tennis courts, and night is the time to fish here. Yabbies are the best baits but I would even use white pillies for flathead.

The Bream Hole is one place to find flathead on live bait and blackfish on the run-up tide. The headlands are not fishing too badly, with bream, school jew and whiting about and a few tailor early in the morning.

Out in the deep blue, snapper, trag, pearl perch and kingies are on the wider grounds.

Squidgie thinks he was born with a fishing line in hand. His father and uncles were mad-keen fishers and spearfishers, he learnt his trade in the Wollongong area as a kid and is still learning to this day in his current area of the far north coast of NSW. Bream and flathead are the main species Squidgie targets on soft plastics or hard-body lures. He hasn’t used bait in about 15 years. Any queries, just email squidgie@bigpond.net.au or phone 0402 415 487.
Previous Targeting whiting on lures
Next The Milani experience