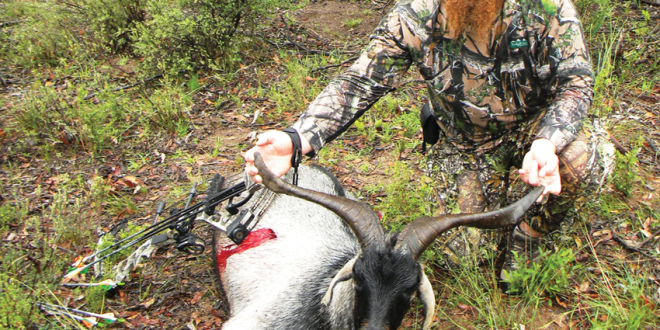 A quality billy goat with a beautiful coat taken by Garrett.

Moving to a new property and the birth of a grandson made the end of 2014 a very busy and eventful time. Life changes can create many stressful situations but I was lucky enough to spend a few days releasing the pressure valve at a fantastic property called Milani.

The property is owned by Wal and Lynne Chapman and offers 8000 acres of playground for those with a taste for the outdoors. Milani is situated about 26km from Guyra in the beautiful northern NSW countryside just north of Armidale.

My son Garrett and I have visited some fairly rugged landscapes and roughed it many times but when we followed Lynne to our accommodation we were greatly surprised to find a well-appointed three-bedroom cottage that can sleep up to six people.

We walked onto the front veranda, which featured a gas barbecue, opened the door to polished wood floors, a fireplace and a kitchen with facilities including a fridge, microwave and utensils.

I’m sure Lynne was a little bewildered by our reactions to having a hot shower and flushing toilet. We didn’t even have to fire up a donkey to have a hot shower. It was so good to have clean and comfortable accommodation, especially when our stay coincided with consistent rainfall for a few days.

One of the Milani requirements is you have to spend your first day with a guide to make sure you become familiar with the property boundaries and landscape features for general navigation as well as put you in the right direction with some good old-fashioned local knowledge.

Jamie took us to places where he’s hunted and fished since he was a child, and was quick to share his endless knowledge of Milani.

Walking the property we encountered good signs of pigs and for this time of year it was encouraging to cross paths with a little mob of about five sows digging for grubs in the rain-softened soil.

We spotted three red deer and a reasonable mob of goats feeding in fairly tough country. The goats were on the move to their high rocky ground to bed down early, probably due to the rain.

Garrett spotted a good group of billies and was quick to give chase. The wind was right as he tried to quietly close in, which is always a little harder to do when your prey is on the move away from you.
Jamie and I were amazed at how quickly Garrett closed 200m to get within 40m.

We then sat back and watched the stalk unfold from a high vantage point. We were just as surprised as Garrett when a grey merle billy appeared from nowhere and busted his approach. It was all over red rover.

As the goats disappeared up the rocky hillside you could practically hear my mind ticking over with plans of how to approach the next day’s hunt and which areas we’d target. Heading back to our cottage we passed two self-contained cabins on the banks of a stream that meanders for 6km through the middle of the property.

Now this is the other aspect of the Milani experience on offer. Imagine stoking the fire in one of these cabins settled among the lush green vegetation on the banks of the stream, watching platypuses play and reflecting on where to target your next rainbow trout.

The stream is well stocked with trout and offers a secluded area well away from all your day to day worries to take in the scenery and put your fishing skills to the test. We didn’t fish on this occasion but I could see the experience providing both serenity and excitement for those who dabble with flies, or in fact any fishing method.

Wal and Lynne have shown great vision in creating this awesome outdoor experience on a working sheep and cattle property. A good percentage of the property is accessible with a conventional two-wheel-drive but a four-wheel-drive opens up endless opportunities.

It’s hard not to notice the resident population of rabbits while driving the tracks. We had other prey in mind but it’s easy to take a break and harvest a few bunnies with the bow. The small and nimble targets provide a succulent bonus to place on ice.

The rains had softened the grounds and some pigs had come out due to the cooler weather and opportunity to dig for grubs. We encountered two mobs of sows with young and on one stalk I was about 10m away from six hungry sows ploughing the earth and busily feeding.

I took the shot and the chosen squealer exploded into the heavy twisted scrub 5m away. Garrett and I searched for an hour but we found our mission in the thick foliage to be fruitless and disappointingly pulled the pin.

I just kept thinking I may have been within metres of the pig and the chance to claim the kill at any time and I wouldn’t have known. Jamie had earlier given us a rundown on a mob of goats and where they might be feeding.

They had been in this area for a few days, and true to form, as we walked in there they were. Garrett and I decided to split up. I took the option of getting across the open ground without being busted and Garrett picked an ambush point about 2km away in case the goats spooked and made a run for the hills.

My first obstacle was to crawl 50m on my stomach across completely open territory to make it to a clump of trees while checking and hoping the wind would not change. Then I used the cover of trees spaced about 5m apart to close in on my prey.

I was successful in getting 30m from a group of five billies with their heads down feeding. I had a few opportunities to shoot but kept my cool and waited for my chosen billy to offer the perfect stance for a lethal shot.

Now this is where this stalk became an amazing circus trick. A number of star pickets with two strands of stretched-out fencing wire stood between me and the billy. I released the shot and to my amazement the arrow changed direction as it came in contact with the wire.

The broadhead and shaft tracked perfectly along the tight wire and came to rest sticking out of the star picket. I could not do this again in a million years and the look on my face must have been priceless.

It was no surprise the twang of the wire spooked the mob and they headed straight off to Garrett waiting in ambush. Things didn’t go exactly to plan and Garrett was left with a 50m shot, but to his credit he brought down a good size billy within 10m of impact.

This billy capped a fun few days hunting with my son and we’ll be back in the peak time, winter, to chase the boars on the property. Milani really offers a fantastic experience for those who want to explore and enjoy the outdoors.

To bow hunt the property you must be a member of a recognised archery club or the Australian Bowhunters Association, but if you want to try your luck in the stream for trout you simply need to inquire with Wal or Lynne by heading to www.milanitroutcottages.com or giving them a call on 02 6775 5735.
A big thankyou to Wal and Lynne for being wonderful hosts and sharing their property.
Cheers, Chief.