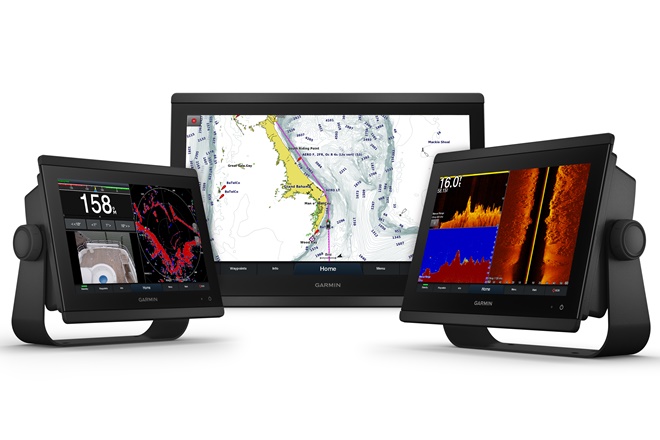 Available in 10-, 12- and 16-inch displays that feature full HD in-plane switching (IPS) screens with multi-touch control, the GPSMAP 8400xsv series is Wi-Fi enabled and offers full connectivity and networkability so mariners can completely customise their marine electronics system based on their needs and preferences.

The new GPSMAP 8400xsv series is being announced at the 2018 Fort Lauderdale International Boat Show.
“Garmin was the first to create a glass-helm design, and we’re excited to bring this stunning appearance to smaller, more affordable displays without compromising the premium performance our customers know and depend on from our award-winning GPSMAP series,” said Adam Howarth, General Manager, Garmin Australasia. “The GPSMAP 8400xsv series offers unmatched sonar and connectivity capabilities so fishermen, cruisers and sailors can feel more confident at the helm, and spend more time enjoying their passions on the water.”

The premium processing power found in the GPSMAP 8400xsv series significantly benefits all onboard sensors like sonar, radar, cameras, video and digital switching, and enhances the user experience across the entire network. This lightning fast processor also delivers Garmin’s fastest map drawing capabilities, so there’s hardly ever a delay, even at high speeds. With SmartMode, these multi-function displays (MFDs) are designed to give the user quick, one-touch access to the information they care most about. Users can configure and customise their entire system for activities ranging from docking, cruising, fishing, and anchoring with just one touch.

These powerful new MFDs are fully network capable with NMEA 2000 connectivity and the Garmin Marine Network to easily build a customised electronics suite – from sonar, radar and autopilots to instruments, cameras and multimedia. The screen can even be spilt to show up to six different features simultaneously, including HDMI video input. Sailors will also appreciate the built-in SailAssist feature that provides data, displays and prerace guidance needed to gain a competitive edge. For full control of the boat from the MFD, the GPSMAP 8400xsv series also
supports OneHelm™, an integrated solution that brings the power and convenience of controlling
onboard boat systems like digital switching, lighting, stabilisation and more, to the Garmin
display.

The all-in-one compact design of the GPSMAP 8400xsv series eliminates the need for blackboxes, monitors, and external Wi-Fi antennas. They feature built-in Bluetooth® connectivity, Wi-Fi® and ANT® that allow the chartplotter to connect with additional Garmin devices like a quatix™ 5 marine smartwatch, VIRB® action cameras, or gWind™ Wireless 2 wind sensor. Users can also pair the new GPSMAPs with the free ActiveCaptain® mobile app for access to OneChart™, smart notifications, trip planning, software updates and much more.