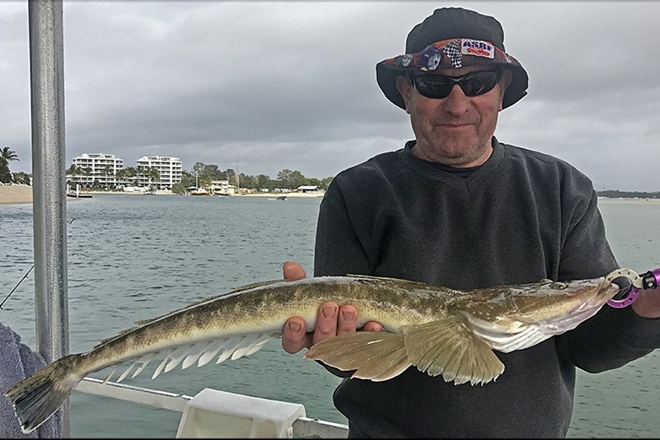 Glorious weather for the start of the school holidays

With some glorious weather for the start of the school holidays, anglers were out in force on the Noosa River. Families enjoyed some great fishing with catches of whiting being very consistent this week. The top of the tide and the first hours of the run out have been the prime times with Gympie Terrace, down at the river mouth, the Dog Beach and Frying Pan all fishing well. A lot of whiting have been caught on surface lures this week with lures like Strada Virals have claiming some quality fish. Live worms, freshly pumped yabbies and peeled prawns have also been the go to bait for catching a feed.

Flatties are still in great numbers, the channels around the river mouth have been the most productive. Soft plastics vibes have been working well in the deeper channels, lures like the Fuze Pulse soft vibes have been very popular with anglers this week. Zman Coconut Ice and motor oil minnows in 3 inch have also got the runs on the board as far as soft plastic go. Bream have also been caught in good numbers, the river mouth and the deeper channels in the lower section of the river on the run out tide has fished well. Very lightly weighted baits fished in a well maintained burley trail has claimed the majority of fish. Bream have also been caught on the surface this week with some nice sized ones around the 35 cm mark caught around the Frying Pan. Lures to consider using are Atomic Hardz pop 50, Strada Viral 70mm and Duo Yurameki 48. The bigger predatory fish continue to be in great numbers in the system, GTs, tea leaf, queen fish and tailor have been landed this week.

The Tewantin stretch up stream of the powerlines has produced Tailor and Trevally. The lures that have produced the goods this week are Strada Torment 80, Strada Viral 85 and 110 and the ever popular Storm Chug bug. Queenies and some nice size GTs were also caught at the frying pan with some big ones caught around dusk right up in the shallows. Woods bay has fished well for G.T’s, Diamonds and queen fish. The current line and around the moored boats is also a place to target these fish. For those throwing plastics try the deeper sections of the river like in front of Coast guard, around the sound and the Tewantin stretch.

On the offshore scene; the weather has really started to play the game with some great conditions over the weekend. The close reefs have fished well for cobia, tusk fish, sweetlip and the odd trout. Fishing baits hard to the reef has claimed some great fish. The Hards and the Barwon Banks have fished well for Tusk fish, pearl perch, hussar, cobia and moses perch. The snapper have been a little quieter than expected at the moment but as the water continues to cool they will really start to come on, of the ones that have been caught 2-3 kg has been the average size. For those anglers that love running the floater rig, North reef has had Cobia, Spanish mackerel, Pearl perch, Moses perch, snapper and tusk fish. The Reefs off Double Island Point has had snapper, cobia, Red emperor, tusk fish, pearl perch and cod.

On the beaches; the section from Teewah Beach to Double Island on Noosa’s North Shore has been where a lot of the action has been with bream, flathead, whiting and tailor all on the score card. The rocks around the headlands have been very productive with good catches of Bream, Tailor and Flathead as well as some legal snapper. Live worms and pipis have been working very well as well as whole pilchards and mullet strips. Sunshine Beach down to Marcus beach has fished well for Whiting, Bream and school sized jew.
In the Fresh; Borumba dam has slowed a bit this week however some good Bass have been caught on the surface. The bays have fish well with schools of fish holding in fairly shallow water. Saratoga are still being caught on subsurface lures fished in the upper reaches of each of the major arms. Lake Macdonald has fish well this week with some great catches on the surface. A few good size Bass have been taken along the bubble line and up around the botanic gardens, hard body deep divers trolled slow along the drop off seems to be producing the goods.