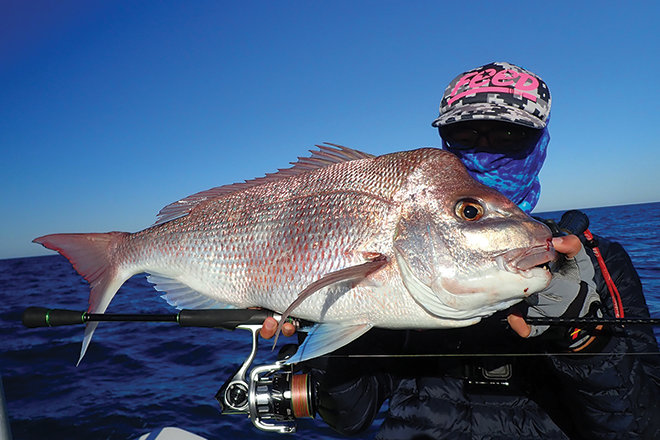 Quang from Bait Tackle Store was rewarded with his PB snapper.

Going light to get the bite

IT is mighty chilly, and my fingers would prefer to be tucked under a blanket, not tapping a keyboard. The weather change has started to affect the fish.

We are finding big schools of non-committal fish on the sounder and not getting too many bites. Occasionally a fish gets stupid, but we never really see it become a pattern.

However, if you find only a few fish, you might get a bite in relatively short time. Go figure! Maybe the build-up to the next new moon will change this frustrating cycle. When the bite is tough, try using lighter lures, lighter leaders and frustrate the hell out of the fish. Lighter lures waft and sink more realistically, especially when fished with slower actions and retrieves.

Just think of holding a soft plastic and how difficult it is to keep dead still. It’s impossible, so sometimes less is indeed more. Deadsticking can be extremely effective on fussy fish. Just be sure the lure is actually in the vicinity of some fish. Often teamed with a light lure is a light leader. This can be important to help the lure sink and transmit soft bites or the bottom.

Light leaders are obviously thinner and hence harder to see, which is something to consider with the smaller winter tides and cooler water – two factors that control water clarity. Aggressive-action lures and retrieves will catch fish in all seasons, the key is to stop the fish thinking and instead get them to ‘react’ to your presentation. Whipping soft lures, jigs and vibes deep can catch you anything from snapper to queenfish, tuna, trevally and even bottom species.

Leader size and lure weight won’t matter too much. Luckily the tuna have been around, so when I get frustrated I turn to them. They have not been easy to catch but it has been worth the persistence. Those fortunate enough to spot the bigger longtail tuna have found them easy to hook. The tough part is finding the bigger models.

Let’s hope this tuna fishing continues a while longer. The longtails will no doubt continue to make an appearance as we drift deep plastics for snapper. And as for the snapper, I’ve seen no big numbers yet. However, I’ve heard of a few down off Inskip Point, so hopefully they move north soon. The water is much colder than last year, so fingers crossed!

The sharks have definitely moved on with the water temperature drop too, which is awesome. When snapper are more active and looking upwards or swimming midwater, I like to use light jig heads (up to 1/2oz) with a grub or paddle tail and lighter leader up to 20lb. Your lure doesn’t need to be big (remember, elephants eat peanuts).

When snapper are hugging the bottom, 3/4oz and 1oz heads are ideal for getting there fast. I use bigger grubs and jerk shads in this case. I am yet to notice a particular jigging style that works consistently for snapper in Hervey Bay. You can use more aggressive twitches with the light heads, but keep in mind you want the lure to still have some depth.

I like softer pulses and hops on the heavier head options. Several solid queenies have shown up. Mostly they are sub-metre fish but the odd horse has been mixed in. It would be nice to see decent numbers hang around, especially if a few horses stay in the game. They are fast and honest sportfish. In winter they don’t seem to jump as much, and hence do not burn themselves out to the point of death.

If you catch queenies, be quick with photos and sometimes a swim before release is a good idea, especially when the water is warmer. As a general rule, keep any fish out of water for as short a period as possible. If you are eating the fish it doesn’t matter, but let’s not kid ourselves about catch and release. Do so with caution, as what’s the point if you throw back a compromised or dead fish?

Remember what catch and release is meant to be about: the fish first. The photo is nice to have but it is way nicer to catch the quarry two years on after it has packed on a few more kilos.

Visit Tri's Fraser Guided Fishing Facebook page @ https://www.facebook.com/FraserGuidedFishingWithCaptainSquinty?fref=ts or give him a call on 0427 230 261 to book a charter.
Previous Lowrance announces price drops on Elite Ti
Next Flathead dominating catches on Gold Coast