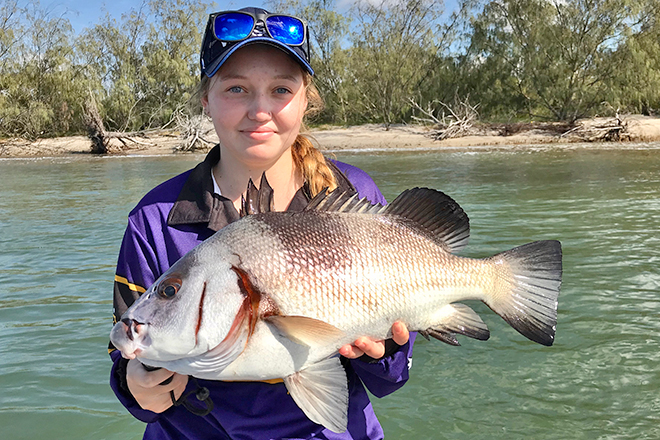 Hi Everyone, hope you are all having a good week, it was such a relief to see some great sunny conditions last weekend and at the start of this week giving everyone a nice weather window to head outdoors and enjoy some quality time fishing. Unfortunately, as we head towards the weekend it looks, we will see the wind increase, the swell pick up and the unwanted rain make a return to the Tweed and Gold Coasts. Once the swell drops heading offshore will be a good option. Let’s have a look at what’s been biting this week. Gold Coast Coomera fishing

The drop in swell last weekend and early this week saw plenty of boats head out offshore in search of some action. A good variety of reef species were reported from both the 18 and 24 fathom reefs off the Seaway including some good quality Snapper, big Silver Jewfish, Trag Jew, Maori Cod, Yellow Tail Kingfish and Tusk Fish. The best methods are either anchoring up on a show of bait and fish on the sounder and then float lining down your lightly weighted bait to entice a hit on the drop or try your luck at drifting baits to cover more of the reef. Best baits are WA Pilchards, large whole Squid, Mullet Fillet, Bonito Fillet and live or butterflied Yakkas. The good news is that a few lucky fishos managed to troll up some nice catches of Spanish Mackerel and even the odd Wahoo after the rain which means the water quality is not too bad on the closer reefs. For targeting Spanish Mackerel, I recommend keeping your eyes peeled on the sounder for shows of bait which may hold fish in that area, try trolling diving lures or well rigged baits is a popular method which allows you to cover more ground whilst searching an area for fish. If you do locate good numbers of fish slow trolling live Yakkas or just dropping a live Yakka down into the show is also a very affective way to catch Spanish Mackerel. Gold Coast Coomera fishing

Chasing a feed of Mud Crabs has been a good option once again with plenty of reports of quality crabs showing up in good numbers throughout the many Rivers on the Gold and Tweed Coast. The main Broadwater and Jumpinpin Channels have also produced good numbers of Mud Crabs that have been washed out by the flow of fresh water. Once the water starts to clan up you should be able to target Sand Crabs closer to the open ocean entrances. Best spots have been the Coomera River including the North and South arms, Pimpama River, Paradise Point, Brown Island, The Never Fails, Tipplers Channel, Jacobs Well, Tiger Mullet Channel, Cabbage Tree Point, Canapia Passage and the Logan River. If you are looking to set your pots in deeper water you will have to keep an eye on then with the extra flow in the water they can easily move if you don’t use a long enough rope and the pot may also require a bit of extra weight inside. A bait bag is a great idea to reduce the amount of bait stolen by small fish, eels and crabs. Whole Mullet, Fish Frames and also fresh Chicken make great baits. Gold Coast Coomera fishing

Jumpinpin and the Broadwater have fished surprisingly well since the last dump of rain, the key is to fish the incoming tide closer to the open ocean entrances like The Gold Coast Seaway and Jumpinpin Bar where the best quality water makes its way back into the system. In the Broadwater try around the Seaway, Seaworld Channel, Wave Break Island and Crab Island. Around Jumpinpin have a look around the Pin Bar, Kalinga Bank, Crusoe Island and the Bedrooms. We have seen plenty of Bream, Tarwhine, some nice Whiting, Flathead, Flounder, Moses, Squire and Tailor being landed using a mixture of soft plastics, vibes and bait. Try looking for clean the water is a good start, there has been a fair bit of bait fish around in these areas which is good sign considering the amount of fresh water that has pushed through lately. Live Yabbies and worms make great bait, if you are using frozen bait try Prawns, White Pilchards and Mullet Fillet.

Brad from Brad Smith Fishing Charters reports once again the rain came and after having such a great time last week the river has turned dirty. The reason for this is the low-pressure system that came through. This totally decimated the northern NSW river systems with some areas recording 400 mm of rain from Coffs Harbour to the Tweed. I guess I can’t complain too much as many of the residents in this area are still trying to patch up their lives after the first flood. The good news is that we are not expecting rain in the near future, and I will be working the early morning run in tides this week near the mouth of the river. I am pretty sure that I will post some good runs on the board as this is where the fish should be concentrated.

Clint from Brad Smith Fishing Charters reports Like Northern NSW, the Gold Coast also received a lot of rain which has muddied up the rivers once again. I did notice over the last few days however that the downstream area is clearing fast on the big run-in tides. This means that we will experience good fishing soon rather than later. This coming week features my favourite morning tides for fishing the deeper Broadwater channels from the seaway to Sovereign Island. Ignore the falling almanac, the fish will be hungry. Good options: Seaway for Jewfish, flats for Whiting, Flathead, channels for Crabs and variety of fish. I did get out fishing a few times this week, catching Flathead and Bream up Nerang River on Pontoon 21 crackjack hardbodies, and Flathead, Whiting, Flounder, and Bream around Runaway bay and Southport on Samaki vibes and Ecogear ZX40’s, with Sax scent uv prawn applied.