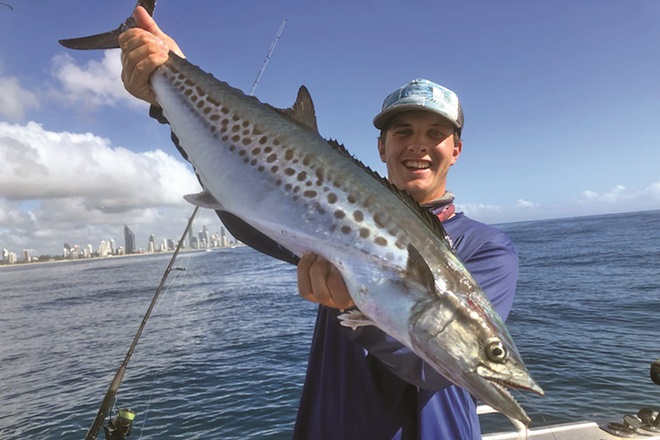 Mitch with an absolute stonker of a spotty.

HOW crazy has the fishing been?

The Gold Coast has had a golden month, with what seems like fish jumping on anything that hits the water, and it shows no sign of slowing as the weather remains stable. With the current bringing that warm nutrient-filled water down from the north, the fish have followed in their masses. On the local reefs, mackerel have been chewing their heads off.

It doesn’t seem to matter whether you are towing baits and lures, sitting at anchor soaking a pilchard or throwing slugs, you’ll catch a mackerel. The spotties this year have been exceptional, with fish well into the 8-9kg range regularly caught.

Anglers haven’t had it all their own way though, with sharks making a pest of themselves in a way not seen for nearly a decade. In my time fishing, I’ve maybe had three or four fish knocked off by sharks. At the moment, some of the fishos are having three or four fish a session hit by the taxman.

The story plays out the same every time. The mackerel will come to the boat and play up massively before hitting the afterburners, by which time the ol’ taxman will knock the fish off, maybe leaving you the head.

The bigger spaniards are also around in good numbers and hitting live baits. Bigger baits seem to equal bigger fish. As we push through into autumn, the mackerel fishing should continue to be great and the fish get bigger (if that’s possible) as the season progresses.

Out a bit wider, marlin have been in huge numbers. It has not been uncommon to boat at least a dozen of these prized fighting fish. Spot X seems to be holding the fish, with bait caught on the spot if you can get your slimy mackerel to the boat before a billy whacks it. A live bait lowered back to the school won’t last long at all. For the size of the fish on offer, 8kg gear is more than enough for an enjoyable fight.

The mahi mahi seem to have moved on, with no reports of them being caught. That’s not to say we won’t get another wave come through as the fish start to make their way back north. Expect the wahoo to also have a stopover.

In the estuaries, mangrove jack have been putting a golden smile on many an angler’s face. These beasts are truly one of the best land-based sportfish you’ll encounter in southeast Queensland. They’ll test every bit of your tackle (as well as you as an angler) as they try to outsmart you.

What is pleasing is in a short space of time the importance of looking after the mangrove jack fishery for which southeast Queensland is renowned has been spearheaded by anglers themselves. The great jack fishing should continue well into April if the weather stays warm.

After the bit of rain in February, the crabbing also turned it on, with some pots coming up looking like something out of Deadliest Catch. The ratio of jennies to bucks has been around 5:1, so while the pots are full don’t be tempted to take a few of those bucks with feathers. It could cost you a lot more than you realise.

The local bars are almost changing on a weekly basis. Tweed River Bar is fairly angry well inside the walls on a run-out and of course that back bank needs watching. Currumbin Creek Bar still looks like a maze on low tide. Smaller tinnies have been making it out over the bank on the low and some cowboys are polishing their props as they kiss the sand bar while taking on a wave.

Tallebudgera Creek Bar still has nowhere to run. It’s shallow and dangerous. The Seaway has been pretty good with the stable weather. On a big swell you still have to watch yourself.

‘Til next month, stinky fingers to you all.

Heath has been fishing since the age of three and grew up fishing the mighty Georges and Hawkesbury rivers.
Previous Solar-powered canoeing
Next National 4×4 Outdoors Show, Fishing & Boating Expo just around the corner