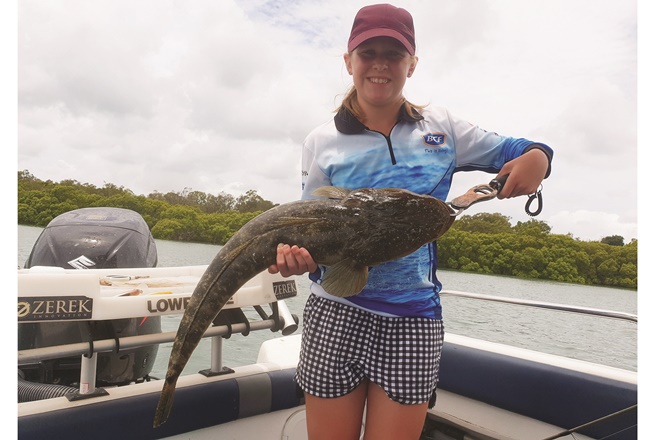 WITH the weather behaving itself this past month, we’ve been lucky enough to hit the water and get a few charters in Moreton Bay.

The main species around at the moment is still flathead, which has been fantastic. They are in good size and numbers. Squire/snapper are about too and for some fun on light gear trevally have been poking their heads up all over the place around the southern Moreton Bay islands. Most of our charters have been with a few regulars and a couple of new people and quality fish have been coming over the side.

A bit of time off over the Christmas period allowed for a family fishing trip to Stradbroke Island, which was a lot of fun and produced quality tailor and whiting.

The first charter back for the new year resulted in grass sweetlip being caught in the shallows around the bay islands as well as quality flathead holding in the shallow water and falling victim to Zerek Bulldog Cranks and Tango Shads. The grassies have taken lightly weighted prawns over shallow reef around the southern bay islands. They are great fun on light gear and very tasty table fish.

Prawns should start showing up over the next few months and hopefully good fish will be following the prawns, so my advice is always keep a rod in the boat, even when you go prawning because you may come across good patches of fish.

A few of those extra-special fish always come over the side during charters. This month it happened for 12-year-old Lily Anne. It was high tide, so the decision was made to troll a few hard-bodies in the shallows. Lily Anne was trolling along the mangrove line holding onto the rod when she said she thought she had some weed on the lure.

But as she started to reel the line in towards the boat, we quickly realised it had loaded up and the fish swam straight at and under the boat, then it turned around and came out from underneath the boat to the surface and we saw it was a rather large flathead. Once Lily saw the big flatty, she wanted someone else to take the rod but everybody on board told her to keep going because this was her fish. After quickly showing itself, the flathead decided to take off and make a pretty good account of itself, taking plenty of good runs and heading back and forth between the boat and the mangrove line.

Young Lily did an exceptional job playing the fish and before too long she had it beside the boat and in the net. Now to say little Lily was stoked would be an understatement, but once the fish was measured we realised it was oversize and had to go back. This was Lily’s first big fish, so she wanted to take it home and show everybody. When she was told flathead over 75cm have to go back in the water, she was a bit upset, but once we explained these fish are the big breeders and putting them back will make plenty of little flathead for the future, she was quite happy to send the big girl home.

So the fish was promptly put back in the water and we drove the boat at idle while Lily held onto the lip grippers with the fish in the water. Once the big girl was ready to go Lily released the fish and let her swim away. I think she got just as much of a kick out of letting it go as catching it. Great job Lily Anne.

With a flathead of 83cm I think you’ve gone straight to the top of the class. What a top effort and I’m sure she’ll be back again to try to better her PB flatty, or do I mean crocodile?