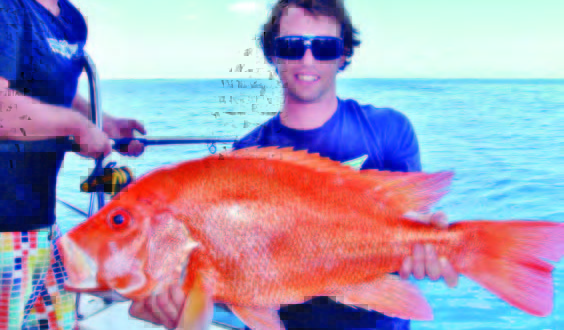 This year has been very typical, with the quality of fishing above average.

We’ve run some charters that have had great catches around Cairns of large and small-mouth nannygai, and on specialised evening charters we have targeted this species and been very successful.
It is really interesting to note that nannygai will happily nibble at a bait dangled in front of them during the day, but at night are ravenous and generally Hoover baits straight down their throats.

We took one lucky couple from Melbourne out on a sole evening charter and they decided to down rods after an hour because their arms were aching. This couple made the sensible decision to keep only two quality large-mouth nannygai to take back to Melbourne and we successfully used a release weight to get others back in the water. We’ve used the release weight more often of late to release undersize or oversize cod and nannygai because these species are often very hard to degas successfully with a needle.

The lead-up period to the coral trout spawning closures, which this year occurred from October 21-25 and November 19-23, saw increased activity from these magnificent fish and some quality models in the 5kg range. The coral reef fin fish closures coincide with the new moon when key coral reef fish aggregate to spawn.

As the Fisheries Queensland website states: ‘October and November have been found to be months of high effectiveness for closures to protect coral reef fin fish, particularly the key target species.
The dates change slightly each year depending on the new moon phases.

Coral reef fin fish are more susceptible to concentrated fishing when spawning so these closures help ensure the sustainability of the fishery.

’We often find that these species can be quite active in the period just before and after the closures.


We have experienced varying success on spanish mackerel, and mackerel numbers seem to be down a little. However plenty of large fish in the 15-20kg range have been reported. Our best effort was a monster 35kg specimen that gave one lucky angler a real fight.

We normally put a floater or live bait out while at anchor and troll lures on the way out. Our trolling catches were well down until we obtained a couple of Williamson Speed Pro lures from Rob and the team at Erskine’s Tackle World.

The Speed Pros are high-quality bibbed lures that will hold their swim pattern up to speeds of 13 knots. Our first try with these lures resulted in five mackerel in 30 minutes on the way to our fishing grounds.

Yes you could say we were hooked.

Cobia have been abundant and these powerful fighting fish have given some anglers a real battle. They are a deckhand’s nightmare because they often come in like a puppy on a lead until they spot the boat and the deckhand with raised gaff and take off at a hundred miles an hour.

While we had good hauls of cobia on our evening charters, the best fish was a magnificent 23kg beast landed by Leisa, who was a bit shocked by its size.

All in all, December was a great month for us at Cairns Fishing Charters. The tourist numbers have been building, along with the heat and humidity. The water temperature is a very pleasant 27C and we are looking forward to a busy Christmas and new year period. Hopefully January will be as mild and dry as it was in 2014 – fingers crossed. If you would like to come on a charter, give us a call on 0427 400 027 and book in early because spots are filling fast.

I look forward to talking to you again next month.
Nick Kelly
Please comment below.