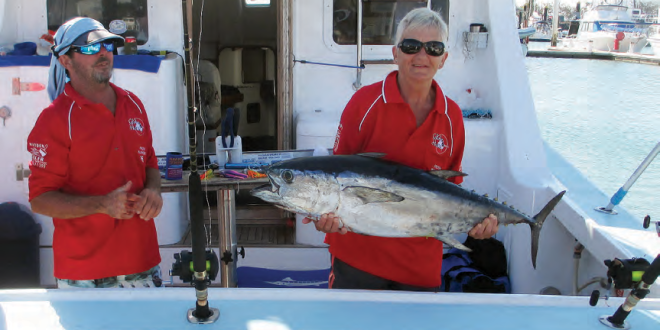 Sia did well to land the first fish of the trip – a solid longtail tuna.

I‘ve, had a couple of runs out over the past month. In fact I was lucky enough to be invited on Bite Me Marlin Charters’ new 40’ Black Watch game boat for a trip chasing beakies near Flat Island.

We set off about 5am and arrived at the trolling area at 6.30am, so it’s not too far to go to chase a billfish.

Smurf the deckie soon had a little spread of skirts deployed as well as a bird teaser, which flicked up a heap of splash with a daisy chain of squid following. With captain Scotty at the helm we began trolling and within 20 minutes were on a double hookup of longtail tuna, with Mick on the starboard rod and Sia on the portside rod.

We cleared the other lines and patiently awaited the arrival of the tuna at the stern. But it was bad news for Mick because the hooks pulled halfway to the boat. The hooks held for Sia and a good-sized longtail was boated.

After a quick cleanup of the back deck the spread was put to work again, with the teaser spraying and skipping like a beauty. We deployed a little Pakula Sprocket, Pakula Fluzi, Mold Craft lure and Smurf’s favourite the Cra-zy Horse. It does everything but swim straight – it dips and dives and goes left and right because the hole through it is on an angle. And it catches fish.

Everybody on deck was on red alert because you know when you get a bit of action early in the piece it’s eyes peeled and get ready to jump on a rod. But nothing happened for three hours.
We took that lure off and put this lure out, swapping and changing while hoping for a result. That was until Smurf decided to break it up by switching one of the skirts to a Classic Blue-water F200 shallow swimmer running short on the starboard rod in the hope of picking up a spanish mackerel to give us a bit of action.

But as always with fishing, you try to predict what’s going to happen and nature will make exactly the opposite occur.

You guessed it – after only 15 minutes of swim time, the rod buckled over, the ratchet started screaming and a healthy-looking beaky was heading away from us at a great rate of knots while peeling 10kg mono from the reel. Shouts filled the air and cameras were grabbed, rods reeled in, teasers put away and then it was up to Shazza to get the fish under control.  After a couple of leaps and a few strong runs, Scotty was reversing to get some line back when the fish became airborne and we noticed it had additional jewellery hanging from its jaw.

Once we had the marlin aboard it was found to be a longliner’s 14/0 stainless circle hook complete with roughly 400lb crimped-on leader. We figured it must have been hooked and then cut free at some stage because there was no way this fish would have snapped the 400lb line, so obviously a number of longliners do the right thing.
Cheers, you definitely made Shazza’s day and the fish gave us good footage before being released. Hopefully we will see it again when it has put on a
nother 600lb or so.

That was the last of the action for the day, but we were all happy to have boated a billfish.


visit www.bitememarlincharters.com.au Scotty holds a certificate of survey for eight people on day trips and six for overnighters.

Thanks for a great day mate.

For my next trip it was back to my little 4.3m tin-nie with me old mucker Mick Slade for an early morning bombing mission to the areas around Quartz Rock.
We were on the water in Coorooman Creek by 5am and the conditions were spot on outside.

It was flat as a chaff cutter’s hat, the tides were reasonable and we had a full lunch box. So we put in a few marks, which I don’t mind sharing because I’m that sort of a guy.

THE first was ‘secret spot’ G2453 – a gnarly looking bit of bottom perfectly suited to losing a heap of new soft plastics and jig heads that we’d taken to try and it didn’t let us down.

We quickly geared back up and before I could even get a cast away Mick was rudely interrupted by a gold spot cod, which fought valiantly before being consumed by a 50-pounder of the same species with a penchant for fish scales. It kept Mick busy for a while before spitting his fish out boatside. The small cod was released minus its scales and swam away despite its little nightmare.

After a few more lost lures I was satisfied Mick’s tackle box was looking a bit worse for wear (which ensures he’ll have to visit the shop soon) and we were off to our next secret spot: G2457. It is located slightly farther down the coast and is an isolated lump of rock that often holds fish. On this trip it was the day of the cod, with gold spots coming in one after another. They weren’t particularly great in size but were awesome fun on plastics. We kept a couple for the plate and after about half an hour headed to spot G2574 – a good-looking bit of rock that actually juts out above the surface (Quartz Rock).

The water was still as flat as a tack, with great colour and a few garfish and herrings skipping about. It looked as though we were going to do well. We tied on some more plastics, with both choosing 4” paddle tails and making our way around the rock. The first lap didn’t produce anything, so I opted for a popper and we did another.

At the end of the lap Mick called for the net and boated a good-sized blue salmon, which we released after a pic or two. Then it was my turn on a softy. I hooked a similar size fish but dropped it after it chafed through the leader… don’t you hate that?

We chose to return to spot G2457 for a bit more cod action, saying we could’ve gone anywhere on that day. After 10-15 minutes we were back in position for a cod attack, with a light breeze cooling us down a tad.

Within a couple of casts the breeze had freshened, so we headed for home. By the time we’d re-turned to the entrance of Coorooman Creek it would have been blowing 15-20 knots.
Be very wary on these early morning raids because if we had made a move farther offshore we would’ve been flogged on the way back. At this time of year you need to be out and back early so you don’t get belted. See ya next month!

See ya next month!
Adrian Cutts
Please comment below.