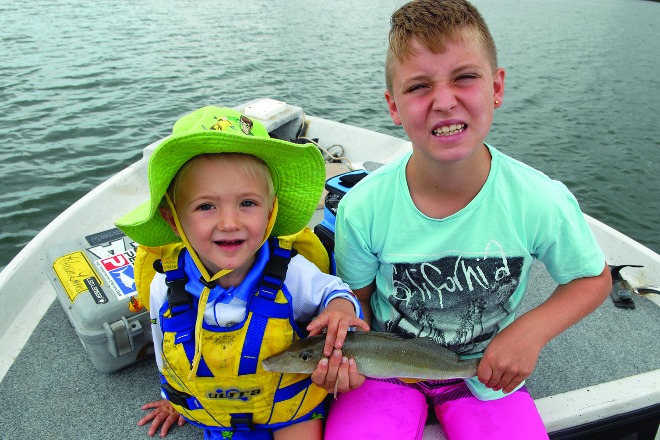 PHEW! What a whirlwind couple of months the Christmas and new year period has been.

Thankfully, in between the hectic festivities has been the serenity of sitting in the boat with the kids and catching a few fish, particularly around the Jumpinpin region. We’ve certainly had a mixed bag and mixed results, with some sessions being nothing short of brilliant whereas others have left us disappointingly short fish wise. To be in with at least half a chance, you will need to use good-quality bait, and live bait is usually best. Yabbies can be pumped from many of the banks leading to the Jumpinpin Bar area from the boat ramps at Cabbage Tree Point and Jacobs Well.

A good-quality yabby pump will last for years and components such as washers are readily available through good fishing retail outlets. A yabby pump is also a good investment because shop-bought yabbies can become quite expensive, particularly on days when plenty of pickers or vermin are stealing your bait. Yabbies are an excellent bait for many of the fish you will find in southeast Queensland waterways, with whiting, bream, flathead, trevally and tarwhine all making short work of a well-presented offering.

Mostly our fishing has taken place in the Gold Coast and Jumpinpin regions, and good results came from the southern side of the Jumpinpin Bar. Tucked away from the swell in reasonably calm waters, we cast our yabbies out to find that the fish were certainly on the bite, though not the whiting we were chasing!

Tarwhine were in plague proportions, with loads of little ones on hand to give the kids some winding practice. I also managed an extra-large swallowtail dart as well as a number of whiting that made it to the dinner plate that night.

Anchoring between South Stradbroke Island and a sandbank allowed us to cast our baits onto the sandbank (which was submerged) before the baits were washed over into the deeper water. That technique seemed to work well. In this area it’s possible to anchor the boat and fish from the beach on South Straddie if you so desire. A spur that juts out here too, and where the waves wash over this formation is an ideal location to catch plenty of fish.

While out we also dabbled in trolling Zerek Tango Shads for flathead for 20 minutes. We targeted a bank just to the north of Tipplers Passage, though only a few small flatties were caught.

Good fishing can still be had in our old haunts though, with the deep hole in the Nerang River at the Council Chambers productive. It’s a place where we have caught a lot of fish in the past, particularly when there’s been a lot of boat traffic. Worms and yabbies work quite well in this area when combined with light lines and sinkers heavy enough to hold bottom. Night fishing has been reasonable, and although it’s great to be fishing out of the heat of the day, some of the nights have been ridiculously cool.


The Coomera River has been hot and cold with regards to whiting and we’ve had to try a number of places before getting onto the fish. Even then the bites haven’t been steady throughout the session because there’s often a mad flurry of activity and hooked fish followed by long periods of no action whatsoever. The kids have been pretty good during our fishing trips, even though we’ve had quite a few hot days on the water.

Water play in the boat, a quick swim after the fishing and plenty of food and interesting toys seems to keep them happy enough. Two-year-old John seems to be taking after his father and is interested in anything that is noisy and can be pulled apart with screwdrivers and spanners. He’s been driving the boat of late (well supervised of course!) and has helped Dad start the motor and turn it off as well. We can’t wait for the day when we are chauffeured around by the kids.

This year we’ll continue with our estuarine fishing and possibly try to fit a few more sessions in at the freshwater impoundments that we have largely ignored for a year or two. The whiting fishing should pick up now that the madness of the school holidays is over. Once again we’ll stick with our tried and true spots around the Jumpinpin area, down the Nerang as well as the Coomera.

Robert is really looking forward to a 10-day offshore adventure in June (and yes, who has to stay home and look after the kids?).

Western Australia is on the cards but unfortunately we will have little time to wet a line, though we will try of course. Another project boat is also on the go, with Rob starting work on another Seafarer in mid-January. At the end of the project we’re hoping to have one more sportfishing boat, though we are still tossing up whether to make her a centre console or tiller steer model. At the moment though we’ve got a boat sitting in the backyard that has had a slight tidy-up and the cabin removed. We bought her second hand and although she doesn’t look like much now, with a bit of work we’re hoping she’ll look pretty schmick in a couple of months.

Leeann Payne has been writing for magazines for over 20 years and specialises in beach, estuarine and fly fishing. She has fished around Australia and has caught a large variety of species from marlin, sailfish, bonefish and barra on fly tackle to reef, pelagics and impoundment species.
Previous Tribe Spin Doctor
Next Super-Solid Sea Adex Armour 55