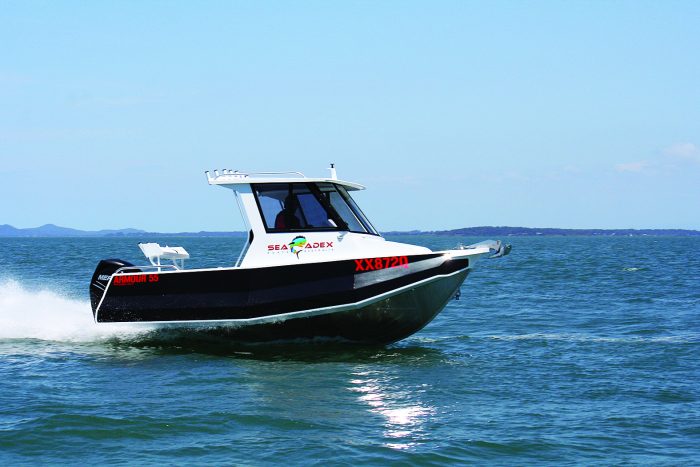 Moreton Bay chop will not worry the Armour 55, even at reasonable speed.

I RECENTLY had the privilege to test the new Sea Adex Armour 55 hard top in Moreton Bay.

Unlike the last time I tested a Sea Adex boat, the conditions were far from ideal, and in fact the bay looked like a real washing machine thanks to a stiff 15-knot northerly wind.

Upon arriving at the Raby Bay ramp I wondered where we would go to find smooth water for some photos. I wasn’t overly keen on heading across the notorious stretch between Cleveland Point and Peel Island but the wind’s direction meant we’d be hard-pressed to find a suitable running-shot location other than Horseshoe Bay. Well I need not have worried because when Adam and Rex from Sea Adex turned up with the Armour 55 in tow as well as the smaller Armour 45 as a photography boat, Horseshoe Bay was exactly where we went.

One thing that surprised me was the fact the guys weren’t disheartened or apprehensive about taking the boats out in such crappy conditions – quite the opposite! According to Adam we were looking at ‘perfect’ weather for a boat test. This really shows the faith the guys have in the boats they build, and they definitely don’t shy away from showing off what their creations can do.

Trundling out through the leads in the Armour 55, it quickly became apparent that this was a seriously solid boat. We were taking the metre-plus swell directly beam-on but even at low speed the big rig remained amazingly level in the slop.

I let Rex take the reins initially to give me an idea of what the boat could do. Turning to face our nose into the wind and waves, Rex dropped the hammer and the 55 didn’t so much climb onto the plane as thrust onto the plane. Nose-up attitude was minimal as the throttle was applied; in fact I’ve never been in a boat that planed with such little fuss.

Almost instantly the supercharged Mercury FourStroke 200hp motor (yes, 200hp on an alloy boat with an overall length of 5.8m) had us punching through the testing conditions at over 50km/h. Thanks to the sharp 23-degree constant deadrise, 1180kg weight and 4mm plate construction the ride is very smooth, with no noticeable ‘banging’ over chop as is normally the case in aluminium boats. Travelling into the swell at 52km/h resulted in straight and true tracking and spray being pushed down and away from the hull due to the huge chines/sponsons.

It was now my turn at the helm and we made the call to head beam-on to the swell in an effort to make it to the shelter of Peel Island. I found the Mercury Digital Throttle & Shift controls to be very sensitive, with only a nudge of the hand resulting in heady acceleration from about 10km/h to 50km/h. And it was the latter speed at which I felt the Armour 55 was really in the sweet spot in terms of ride and fuel efficiency.

With a 150-litre underfloor fuel tank as standard and such an efficient cruising speed, getting out to and back from far-away fishing destinations won’t be a problem. The 200hp engine on the test boat is the maximum horsepower allowed on the 55, and fitting a 150hp or 175hp motor would improve the fuel range even more.

Adam was aboard the Armour 45, and being slightly unhinged he challenged us to a race to Horseshoe Bay. With white caps all around us, the 55 (and the smaller 45 mind you!) made the trip to Peel with almost laughable ease. Due to Adam apparently not knowing how to drive a boat at partial throttle, we in the 55 only overtook him once I’d pinned the throttle in the calmer waters closer to Peel. Flat out the big 55 managed 72km/h with two people on board and nearly 150 litres of fuel, though the guys felt by playing around with props they could increase the V-max to over 75km/h. On the motor at the time was a 19”-pitch Mirage Plus propeller.

Regardless of speed and wave attack angle, the Armour 55 kept us totally comfortable and dry thanks to its large hard top. Despite performing some borderline crazy manoeuvres with Adam later on, I arrived back at the ramp not having absorbed a single drop of salty water.

Speaking of such manoeuvres; I have never cornered so hard on land or water as we did in the Armour 55.


With Adam driving, our speed was increased to 60km/h before Adam wound in full steering lock and mashed the throttle. We proceeded to do ridiculous doughnuts at full throttle, with our speed remaining north of 55km/h and the turning radius staying incredibly tight.

I’ve never felt stronger G-forces (just remembering it is making me queasy) and our cornering forces were so strong that the soles of my shoes were actually in danger of separating and my arms became tired from hanging on for dear life. Needless to say, the Armour 55 will go wherever you want to and predictably do exactly what you ask of it. The 55 has a 2.45m beam, affording plenty of deck space, with good high sides upon which to brace your legs during ridiculous cornering manoeuvres.

With the photography done it was time to head back to Raby Bay in the now even stronger northerly wind and waves. The fold up/down seat cushions meant it was just as comfortable to stand and drive as it was to sit. I had a play with the hard top’s sliding side windows on the way back and found that just cracking them open afforded plenty of flow-through ventilation while under way, and closing them allowed you to remain completely dry.

Once again the Armour 55 found its sweet spot at 50km/h on the trip back to the ramp, and the sloppy, unpredictable waves attacking the right quarter of the bow did little to unsettle us, with no throttle adjustments required even over bigger sets. As Adam drove the 55 back onto the trailer I had to smile; this was a deeply impressive boat.

While somewhat overkill for southern Moreton Bay and more suited to tackling the serious swells of the northern bay and offshore, the Sea Adex Armour 55 makes a very strong case as a go-anywhere, chase anything fishing platform. In terms of interior fit-out, this demo boat was relatively spartan due to a lack of client customisation.

A customer’s soon to be built boat will feature additions such as large side pockets, a dedicated kill/ice tank and whatever else is decided upon. Sea Adex boats are totally customisable, so what you see in the photos is not necessarily what you’re going to get, with all aspects of the interior such as layout, consoles and accessory choice totally up to you. Though a relatively basic setup, the test boat still featured a deck wash, cabin cushion, dual batteries, interior light, side storage pockets with covers, self-draining deck, rocket launchers, bait board and more.

Daniel is BNB's subeditor and occasional fish-wrangler. If you've got a great story or at least an idea for one, flick Dan an email at editorial@bnbfishing.com.au
Previous Good Results from Jumpinpin Region
Next Fully Optioned 520 Sea-Rod Review