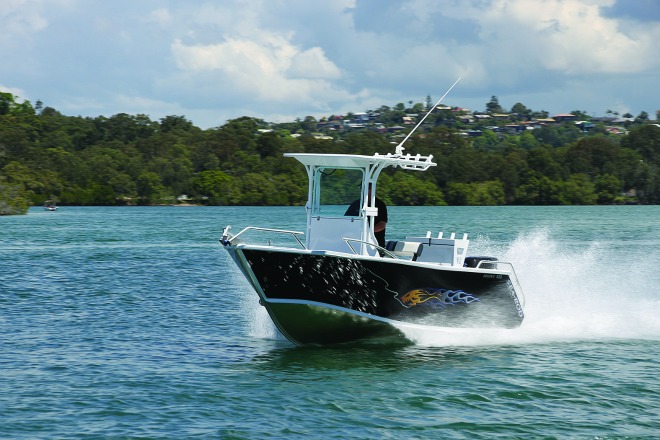 The large reverse chines not only provide stability at rest, they deflect water and spray away from the hull.

I DON’T need a lot of incentive to get away from the computer and onto the water for a boat test, so whenever possible I jump at the opportunity.

This is especially so for Australian designed and built models because I’m fairly patriotic. I recently had the chance to go for a run in a fully decked-out 520 Sea-Rod Deluxe in centre console configuration. This particular boat was extremely well fitted out as per the new owner’s request. The owner was itching to get his hands on it but thankfully let me have a play first so I could compile this review.

Sea-Rod boats are manufactured by reputable boat builder Formosa, with the Deluxe being the base model and Offshore the premium model in the range. However I use the word base hesitantly because the Deluxe boat was far from basic in both quality and ride.

In fact the finish of the 520 Sea-Rod was fantastic, with long, smooth welds along the gunwales and clean lines throughout. Sure, you probably don’t need fully welded gunwales and tack welding would be sufficient for joining the material as the gunwales have only a small bearing on the integral strength of the hull, but it looks neater and gives the boat more longevity by preventing salt from getting in behind the sheets.

This clean finish also makes the boat much easier to clean, which is always a bonus, especially when you have had a long day on the water. And if you are going to the expense of fitting out the boat with a host of options and a sweet paint job, you want the finished product to look top notch.

As I started to check out the boat more thoroughly, I realised it wasn’t just the gunwales that had this high-quality workmanship. In this boat the centre console was quite large and incorporated a hard top, which gave it an even stronger feel.

In terms of layout, the dash was extremely neat, with room for the massive Lowrance unit to be flush mounted along with all the gauges and a top-mount throttle, which was easier to drive compared to the normal throttles often fitted on the side of the console. A large shelf underneath provided good storage and the bottom compartment housed the twin batteries for this rig. A good thing about the placement of the batteries was they were under the centre console, rather than down the back of the boat, which aided in keeping the boat balanced and level.

With a different fit-out you also have the option of storing the batteries on a raised shelf in the stern. Also included in the centre console was a dash-type compartment under the targa where a radio was mounted, safe from the elements and within easy reach.

It is worth noting the large T-top could be folded forward simply by removing four nuts, making the boat’s overall height lower for easier storage. The seating at the helm consisted of a large storage box with a backrest that could be pushed forward or back.

I like standing up or using the seat as more of a lean point when driving a rig like this. This kind of setup gives you more storage and better utilises the space compared to single or dual seats.

The Sea-Rod’s wide beam of 2.4m also plays a part in the feeling of extra space, and even with the large centre console there was ample room on either side. In addition, the wide beam forms a solid and effective hull (which is constructed out of 4mm sheets). With a deadrise of 17 degrees and a water ballast hull, which consists of four chambers that hold water when at rest, you end up with a very stable fishing platform. The beauty of this ballast system, which I think is unique to Sea-Rod boats, is the chambers are not just in the centre of the hull but spaced out on both sides, giving you even more stability.

Combine this with a large reverse chine and you have a boat that remains stable even in choppy conditions.

So how does all this translate into ride quality? Basically, you get a boat that is stable at rest, punchy out of the hole (which, let’s admit, was never going to be an issue with a 140hp power plant on the back), and can handle the chop.

On this boat the transom had been upgraded to allow the extra horsepower to be fitted, as the standard model is rated to 115hp, which would still be heaps of grunt for this boat. In saying that, it was fun to have a play and I’m almost never going to knock back a few extra horses if the boat can handle it; and this one could.

Jumping onto the plane, the boat remained very level (having the batteries mounted forward probably aided a little with this) and revved out smoothly. However this was the first time the boat had been on the water and I felt the engine could be raised one notch to release it a little more, which would also give the hull more efficiency through the water. But hey that is what water tests are for: refining the end package to give the ultimate ride, which is what good marine dealers do.

Another notable feature of the 520 Sea-Rod Deluxe centre console was the impressive amount of storage. Down each side were two very large pockets, the front casting platform incorporated a hatch for storage and the rear shelf in the helm could either hold the batteries or in this case be utilised in another way. Just behind the helm storage box, a large kill tank was also fitted. For a relatively open boat, the storage needs had well and truly been met.

A nifty design feature of the back door was its ability to be folded in to become a platform you could step on, giving you a larger area on which to place your feet. Overall, plenty of attention had been paid to detail in both the finish of the boat and its functionality, which makes this a boat you would be proud to own.

For more information on the Sea-Rod range, check out www.searod.com.au

You can find contact details for the dealers on the website or you can speak directly to the manufacturer.