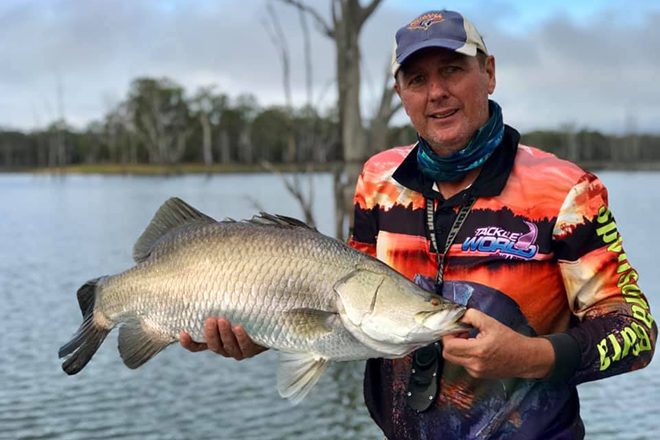 Keith Whalley with an 80cm barramundi he caught at Lake Monduran.

WOW!! How good was it to see a good run of calm offshore weather around the Bundaberg region during the past week?

BUNDABERG OFFSHORE
With not a car park left at the Burnett Heads boat ramp, this meant that a lot of boats had the chance to head well offshore, and by all reports everyone caught fish. The islands from here to 1770 all produced some quality coral trout, red throat, tusk fish and some cracking red emperor. The gutters also produced some great fishing with some big grass sweetlip, smallmouth nannygai and some big coral trout. Live bait seemed to be the go out on the gutters. There was also some big cobia and Spanish mackerel caught by trolling lures and gar as dead baits.

BUNDABERG INSHORE
The Cochrane Artificial, Ryan’s and the Two Mile all fished well and with such good weather, this allowed a lot of the tinnies to get out there. Plenty of fish were caught with grass sweetlip, grunter and some smallmouth nannygai all reported. There was heaps of Spanish and school mackerel caught. Live baits or high-speed spinning with chromed lures was also a deadly method. Hopefully it won’t be long and we should see a run of snapper hit these inshore reefs.

THE BURNETT RIVER
Bream seem to be the talk of the Burnett with heaps of good quality bream being caught. The rocky areas seem to be the ones to target. Most of the bream have been caught on lures and soft plastics such as the Berkley Gulp range and small crab imitations such as the Crusty Crabs have been deadly. There is also plenty of barred and spotted grunter about, so it would be well worth using bigger baits. There are plenty of whiting and flathead on the flats and a few jacks in the deeper holes. There is still a scattering of prawns about and it would be well worth your while.

BAFFLE CREEK AND THE KOLAN RIVER
Both the Baffle and the Kolan systems continue to fish well with some great jack fishing to be had. Jack to 50cm have been common and most have been caught on lures with soft plastics by Happy Rock Softies being hot favourites. There are heaps of whiting and flathead out the front of Miara with the first of the making tide being best. These systems also have a run of prawns and crabs, so get out and into them.

LAKE MONDURAN
Lake Monduran fishing is red hot with sessions of up to twenty-plus barra being caught, including barra to 85cm. Most of the prominent points have held the barra, and the key is to hold back off the weedy points and cast along the weed edge. Reidy’s B52 and Castaic soft plastics have been the go to lures for the Monduran barra lately.