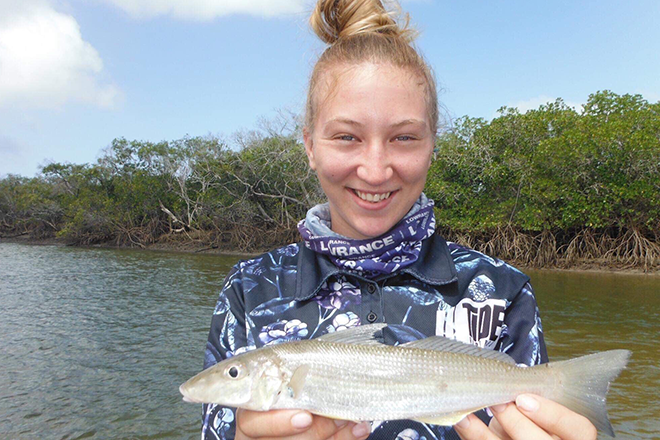 INSHORE REEFS
It looks like we are finally going to get some weather good enough to fish the inshore reefs! There should be plenty of mackerel action all up the coast with the full moon being in our favour. Fast-retrieving 35g and 50g Flasha spoons off the bottom is one of the most exciting and effective ways to catch the schoolie and spotted mackerel. Another deadly way to catch them is using lightly weighted pilchards out the back of your boat. Try to stay away from using a wire trace. Using 60lb Fluoro Carbon is plenty. Also, there should be some big spanish mackerel roaming around so don’t forget to put out a floated live bait. There’s also been reports of some stonker grunter being caught, so don’t forget to jig some Gulp soft plastics and Samaki 20g vibes off the bottom.

BUNDABERG OFFSHORE
Ok, so the offshore forecast for the Bundaberg area is a bit on edge, so make sure you look at the updated forecast before heading out wide. However, with the full moon being early next week the fishing should be awesome! The coral trout should be ON in the shallows. High tide is around 7.00am so that should be a hot bite time. Pilchards and fresh flesh baits are always the standout baits to use. The red emperor should be chewing and again, make sure you fish on top of that tide because you’ll experience some run on either side of the tide with the big full moon tides. Keep in mind the afternoon tides are much smaller, which will make the deeper fishing easier.

THE BURNETT RIVER
The Burnett is still firing on all cylinders! There’s been awesome numbers of flathead, mangrove jacks, bream and whiting. The flatties have been taking a liking to 5” Gulp Jerkshads and soft vibes with the Samaki Vibelicious being the standout. Most of the Jack are being caught on the trusty old 4” Zman Swimmerz and 4” Zman Minnowz being slow-rolled over rock bars. The size of the bream in the town reach at the moment is outstanding! Most of them are being caught on 2” Zman Grubz plastics and small prawns. There’s also been some cracker summer whiting caught in the Burnett. Fishing the incoming tide with beach worms, prawns and fresh yabbies is an effective way to catch them. Also, don’t forget to throw the crab pots in because the crabs should be on!

BAFFLE CREEK AND THE KOLAN RIVER
The Baffle and the Kolan are still fishing well. The mangrove jack and jewfish are the stand outs for this week. The jew have been taking a liking to 20g soft vibes and live baits. They have been schooling up in the deeper holes and biting on the tops and bottoms of the tides. The jacks are still smacking the smaller bait fish so all your smaller plastics and hard bodies will be the go. The 78XD Lucky Craft Pointers have been the standout lure. There’s also been reports of some donkey grunter being caught, so don’t forget to target them! The crabbing has also been firing in these systems so don’t forget to put the pots in!

ELLIOTT RIVER
The Elliot has been fishing red hot for summer whiting over the past week! I’d be aiming to go down for the afternoon incoming tide. Beach worms, prawns and yabbies will be again your deadly bait. With the afternoon tides being smaller you can get away with using a lightly weighted sinker. It also would be well worth a fish for a jack after the change tide. Mullet fillets and livies will be the baits you’ll want to use.

LAKE MONDURAN
Lake Monduran is still fishing very well! With the dam water level dropping a little over the past week, some new structure is being shown. The stand out lure for me last weekend was the Rapala Shadow Rap. Twitching them hard against shallow weed beds got the barra bite for me. With the full moon approaching the barra should really fire up. It’s important to get there nice and early in the mornings with these hot days we are experiencing. Most fish are being caught before 8am.

Till next time
Keep it real
Mitch Beyer