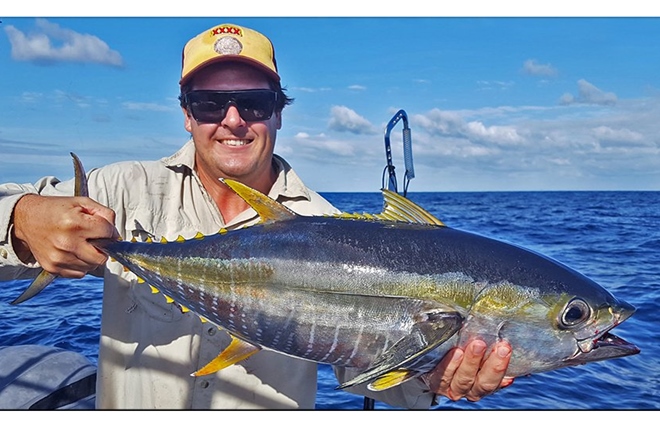 There have been great weather windows over the past week, giving the offshore angler a chance to sneak across the bar and head to the reefs. Sunshine Reef seems to be a favourite for most anglers in smaller craft and has fished well for Cobia, tusk fish, sweet lip and squire. The snapper have started to show up and as we keep saying a burley trail is crucial to picking up some good nobbies, another good point is to make sure you use larger baits, with so many pickers around they get through those small baits fairly quick. North Reef has also been fishing well with  cobia, spanish mackerel, pearl perch, moses perch, snapper and tusk fish all hitting the decks. For the larger craft; The Barwon Banks and The Hards fished well for amberjack, snapper, tusk fish, moses perch and some good pearlies. For those that did the big steam up to Double Island Point, snapper, cobia, red emperor, tusk fish, pearl perch and cod have all been on the Menu.

For the river angler the Noosa River is looking pristine with many holiday maker making the best of the conditions, flathead numbers are still good with plenty of fish coming from the Tewantin stretch and the Ski Runs. The deeper channels around the river mouth have also been productive. Live baits have done the damage this week. Baits fished close to the bottom on the runout tide have worked the best. For those that fish soft plastics the lower end of the river has been more productive. Chase baits in 2.5 and 3 inch, Zman minnows in 3 inch, and Squidgy Wrigglers have all recorded good catches.

For the whiting anglers; Once again the river mouth has been the best spot for a feed. Weyba creek has also fished well. The last of the incoming and the first of the run out has seen the flats fish well, the deeper channels around the bottom of the tide has also claimed some nice fish. Live worms have been the go to bait for catching a feed of these tasty fish peeled prawns and squid tentacles have also worked really well, if you love flicking a surface lure work small surface pencils like the Strada Virals and Sugapen. The Bream seem to be on at the moment with some great really good fish being caught, the river mouth and the jetties along the river are all holding great numbers of fish. Cranka crabs have come into their own this week with some outstanding fish being taken by these great little lures. If there is one thing a bream loves it’s a crab, and there is no better imitation than a Cranka Crab.

Some monster GTs have been caught this week with poppers and surface walkers. Tea leaf, Queen Fish and Tailor have also shown up in good numbers this week. The Tewantin stretch up stream of the powerlines has produced Tailor and Trevally. The current line has produced some nice trevally, with the back of the Noosa Sound also producing some great fish. Queenies and some nice size GTs were also caught at the frying pan with some big ones caught around dusk right up in the shallows. Try lures like the River2sea Bubble Pops, Nomad Madscads and Storm Chug Bugs.

On the beach; Teewah Beach has some really nice gutters at the moment and they are holding Bream, flathead, whiting and tailor. Pippies, worms and pilchards are all prime baits.   The rocks around the headlands have really good concentrations of fish at the moment Bream, Tailor, luderick and gar fish. Strip baits are working the best in these areas so give mullet, bonito, squid strips or whole pilchards a go. The eastern beaches from Sunshine down to Peregian have fished well for Whiting, Bream, flathead and tailor.

In the fresh water; the timber in Borumba Dam has fished really well this week with some good Bass caught down deep on soft plastics. The bays have also fished well with big schools of fish holding in shallow water. The surface has been very productive this week with some good Saratoga and bass being caught on both surface and subsurface lures fished in the upper reaches of each of the major arms. Lake Macdonald has been a bit quiet this week. A few Bass have been taken in the upper reaches near the road bridges and in the skinny water.