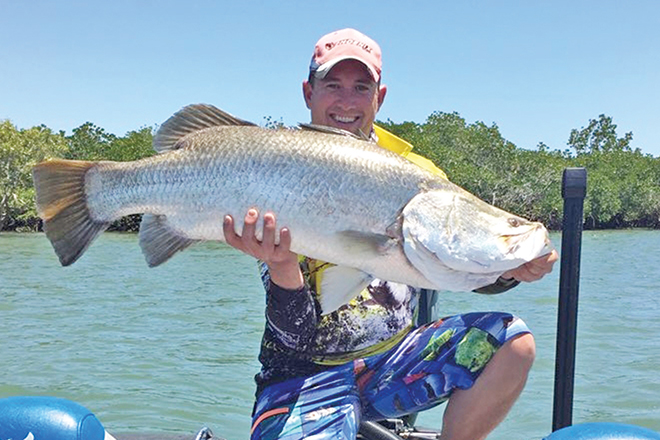 Quintin Maclean held one of the quality barra from this year’s Rocky Barra Bounty.

WITH the barra season closed in tidal waters, I would like to take this opportunity to recap on what happened at this year’s 2017 Gracemere Rocky Barra Bounty.

The competition was held from October 26-28 and the Fitzroy River was on fire leading up to the event, with reports of double-figure sessions not uncommon. Two weeks before kick-off, we had a weather event that came through and dumped a lot of rain across central Queensland. The majority of falls were around the Bundaberg region but enough rain to the west saw a flow of fresh water coming down the Fitzroy.

The biggest question on competitors’ minds was just how much and how dirty the fresh would be coming through the barrage.

Floodgates opened about a week before the comp was to commence. It was clean water, so competitors in the Gracemere Rocky Barra Bounty were still hopeful it wouldn’t chase the barra from the top half of the river.

Only three days out, the water turned from clean to mud as the dirty water from the Dawson area arrived. I think most of the teams cast their plans out the window at the sight of a dirty river. One big advantage we have with the Rocky Barra Bounty is the entire net-free zone here on the Capricorn Coast is within the fishing boundary for the competition.

Even if the Fitzroy River is in flood (like it was last year), three other major systems can still be fished (Corio Bay, Coorooman Creek and Port Alma), not to mention the countless headlands. So fishable water is never too far away. At the end of the two and a half days of competition, records were being broken left, right and centre.

Not for numbers of barramundi, but their size. Out of the 484 barra tagged during the comp, 353 were of legal size, which equates to 73 percent. The previous best was back in 2013 when 56 percent of barra were legal. The average length was 69cm. Not only was the average size a record but the number of trophy fish over a metre also hit the jackpot.

Fifteen metre-plus barra were tagged, which was double the number in previous years, with the biggest coming in at a whopping 133cm. This barra was the second biggest recorded in the history of the bounty behind Ken Richardson’s 150cm monster (RIP Richo). Those barra stats are outstanding considering we had about 30 percent of fishable waterways lost due to floodwater.

More records were broken in the king threadfin department. It was the second-best year for numbers but this year 48 trophy fish over the metre mark were captured, with the biggest going 132cm. The average size for threadies came in at 84cm. Considering 60cm is the legal size, that is almost unbelievable.

These amazing stats go a long way to backing up the fact that the ban on commercial gill netting in the net-free zone is having a positive effect on fish stocks. Those stats will also rival any premier barra comp in the country. Tackle shops are being inundated with phone calls from tourists wanting information on coming to fish the area.

I have chatted with lots of ‘out of towners’ at the boat ramp and they all have big smiles because of the fish they’ve caught.