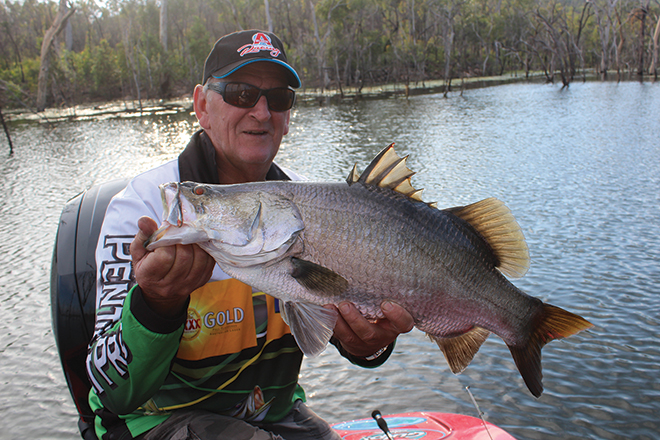 I can honestly say it was the trip of a lifetime, but in this article I’m only going to write about the two southern dams: Awoonga and Monduran. In the next article I write about the more northern Kinchant and Teemburra.

At the start of the year I requested 10 days off work in early November to go barra fishing, basing the trip around the lead-up to and the fall of the full moon because at this time every year the fish seem to bite their heads off. The road trip started on a Sunday afternoon. I finished work around 3pm and headed straight home.

Dad had the boat and car ready, so we hit the road north. For our first stop, we pulled into Lake Monduran.

During the heavy rain just two weeks prior to the trip, immense amounts of water had gone over the dam wall. Even so, we were still keen to give it a crack. As we arrived at the dam, a massive storm rolled through and we had to wait it out before hitting the water.

We launched the boat at about 8pm and headed 10 minutes straight up the dam to Bird Bay. At this time of year the barra seem to head into this bay in large numbers and that’s exactly what we saw.

We motored over a couple of our regular spots comprising 2.5m flats on points and right up the back of some bays that the water pushes into during a northerly wind.

Our Humminbird Helix 12 with Mega Imaging was showing good numbers of fish and it was great to see heaps of barra still in the dam after so much water going over the wall. Regardless, we couldn’t manage a bite. I think with so much water movement it will take a few weeks for things to settle. However, I’m sure the fish will be on the chew before long. We left the dam at dawn and headed to Lake Awoonga.

On our arrival at Awoonga, we booked the Awoonga Gateway Lodge for two nights. It’s the place to book a cabin if you’re heading to the dam for some barra fishing. Owners of the lodge Mark and Lynn are very helpful. They know all the spots and will try to put you onto the fish for the best chance of hooking and landing a massive barra.

Before heading to the dam, give them a call on 07 4975 0033. I hadn’t fished Awoonga since the 2013 floods but had heard good reports in the lead-up to our trip, so we were keen to try to whack some barra. This dam had copped plenty of rain as well and had gone over the wall by 2m prior to our trip. As we arrived at the boat ramp we saw the water was very clean and almost blue, which gave us a massive confidence boost.

We chose to start fishing at Gold Mine Point on the eastern side of the dam. Targeting this point and sitting in about 3m of water we could see plenty of barra moving through on the sounder. Casting O.S.P 120 Bent Minnows with upgraded Owner ST22 hooks, we sunk the hooks into a couple of nice barra around the 65cm mark.

This lure is a subsurface walker and with the upgraded hooks the lure would sit just under the surface, which was perfect for targeting fish over the weed beds. Catching these fish was a great way to start our barra fishing campaign. My good mate Wayne Nettleton showed us these lures and I’m glad he did because they are brilliant.

After catching a couple more barra, we decided to drive over some of our old haunts. We saw a few fish but couldn’t raise a scale. We then headed back to the cabin to sleep for a couple of hours so we could be ready for the arvo session. For this later session, we had my old tournament partner join us: Trevor Burgess from Happy Rock Softies.

Trevor had enjoyed a great session the day before, catching over 20 barra, and he was keen to put us onto more fish. Trevor took us to a bay layered with timber and as we were driving into the spot, I was thinking it would be an epic fight if we hooked a decent fish because hardly any clearings were in the area. We moved quietly into the back of the bay using the electric motor and once we got to the spot we tied up to a tree.

By mooring the boat to a tree, we figured we could sit still and annoy the fish into biting as they moved through the area. The lure that worked the best was Trevor’s Happy Rock Grub. I rigged one with my favourite weedless hook, a 5/0 Owner Flashy hook. You can cast this combination anywhere, and with the added flash, the fish can’t resist.

We had one of the best hours of barra fishing I’ve ever experienced. From landing barra to losing barra and just experiencing the bites, it was epic. We landed about 15 barra between us but we lost a great many more as well. It was an awesome experience fighting these fish in such a snaggy area and we had to go hard or go home.

The only problem was we only got to fish the spot for an hour because another massive storm was rolling up the dam. So we headed back to the cabin around 5pm, which was a bit disappointing, but what a session. It’s great to see the dam fishing so well. The next day we headed back out to target the same areas but after the storm a lot of the fish had relocated.

We ended up with a couple of fish but it was a tough grind. Dad landed a solid barra of 80cm mixed in with a couple of rats. We moved on and looked for other areas with similar structures but had no more luck. That storm definitely did something to the fish. We didn’t even head back out in the afternoon because we were keen to have a good night’s sleep before driving to Mackay the next morning.

I’d just like to thank Awoonga Gateway Lodge for having us. Mark and Lynn have some great cabins and we’ll be back. And thanks heaps to Trevor from Happy Rock Softies for putting us onto so many fish. Make sure you check out his range of plastics on Facebook. Stay tuned for the northern barra fishing report.

Callum first went fishing with his dad when he was about four years old, and he’s been hooked ever since. He got into freshwater tournament fishing when he was roughly 13 years old and has competed in bass and barra tournaments since then. His biggest achievement on the competition circuit came when he was 16, becoming the youngest person to win a Bass Pro. He eventually became the number-one ranked angler in the Australian Bass Tournament Series and is also part of the Purefishing Pro Team. Callum recently obtained his coxswain’s licence and is in the process of getting his bass boat in survey. When this is done he intends on setting up a charter business, running salt and freshwater charters on the Sunshine Coast.
Previous Rhino-Rack SunSeeker is back and better than ever
Next Gracemere Rocky Barra Bounty a resounding success