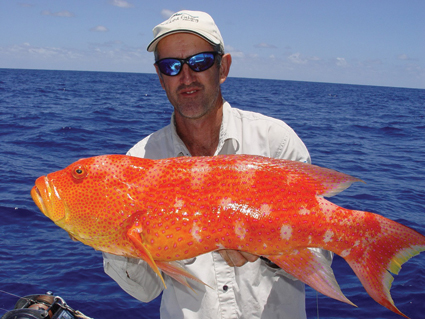 David Fox with a quality coronation trout that ate a whole dead yakka on a paternoster rig. This fish came from a very small isolated rock.

WITH 2015 in full swing I hope you have managed to start the new year with some great fishing. A lot of fishers begin the year with goals they would like to achieve over the next 12 months. These might include a new location, a particular species or a size of fish to tick off the list. Either way, having goals or plans for your fishing adventures is a great idea to further improve your knowledge and skill.

When it comes to targeting a new species, it’s important to know a little about that species and how to fish for it.  Magazines, DVDs, forums and social media are all great learning platforms from which to gather information and begin your quest to achieve your goals. From there it’s up to your own experiences to further learn and finetune your techniques to improve your catch rates.

Choosing a particular species to target is usually a fairly quick and simple choice for anglers and there’s always a common list.  These fish are regularly covered by fishing journalists and DVDs and eventually they are ticked off the wish list. Now I will cover something a little different that I’m often asked about and that’s the beautiful coronation trout.

Caught as by-catch while chasing other large reef fish such as red emperor, there’s no doubt the coronation trout is one of the prettiest fish in the ocean. Though colours vary depending on size and location, the striking purple spots mixed with a bright yellow underbody fading into a beautiful deep red makes them a favoured fish to catch and photograph.

Did I mention they are good eating? They are highly prized table fish, with lovely white, delicate flesh similar to coral trout.

The coronation trout (Variola louti) is part of the serranidae family, which is commonly known as coral trout.  As most would know, coral trout often inhabit large reef structures in tropical waters where there is plenty of protection to hide from predators.

Coronation trout are no different, living in cracks, caves, overhangs and basically anything that offers protection. Even though they can be caught among shallow reef systems in just a few metres of water, we tend to find much greater numbers on the deeper reefs between 40 and 80m of water and particularly on the wider reefs in the south and central Queensland regions.

The larger reefs and bommies generally hold better numbers of coronation trout purely because more structure is on offer, but a small rock the size of a car can also produce these fish as long as that rock has the protection the trout needs.

Coronation trout are aggressive feeders and will usually smash baits as soon as they hit the bottom. They are commonly the first fish caught at fishing spots and in particular on newly found ground. Blue maori cod display very similar behaviour and I have often landed these fish together along with red emperor. In my opinion both blue maori cod and coronation trout are territorial and live in the same area for long periods on the deeper reefs.

Fishing the same smaller reefs time and again will rarely see coronation trout caught from the same spots.  Because of this, the most important advice for targeting these fish consistently is to find new ground that has seen little to no fishing pressure. On the larger reef systems these fish move around a little and will take up residence in suitable homes where they can breed. Coronation trout will grow and also live on those larger reefs with other coronation trout, so larger reefs may continue to produce these fish time after time.

I have been lucky enough to capture these fish on the underwater cameras numerous times, and to my surprise they were happy to leave their homes and swim all around the reef in a very casual manner. They look extremely inquisitive and just as pretty under the water as they do out.

Good mate and legendary spearfisherman Tim McDonald has spent a considerable amount of time free diving the deeper reefs and experienced first-hand the habitat of these fish. Tim said they are one of the hardest fish to spear. They’re smart, cunning and very cautious when danger is present, often hiding behind rocks and cautiously peering over, under or beside the structure to keep an eye on the danger.  Tim said if there was ever a fish with a human-like expression, the coronation trout is it.

Seeing as coronation trout are bottom feeders, it makes sense to target them close to the bottom. Paternoster rigs are very effective at positioning baits  close to the sea floor.  Coronation trout often roam around the reefs about a metre off the bottom, so the paternoster rig is ideal because baits will be situated in a similar position and they can easily be seen by roaming fish from some distance away.

The running ball sinker rig comprising of enough lead to hold bottom can also be successful. Even though this places the bait hard on the bottom, these fish will happily take baits in this position. Unfortunately this can allow the trout to quickly run for cover and possibly bust you off.

Being busted off isn’t a common occurrence when chasing these fish and even though they hit hard and put up a good account of themselves, they don’t grow particularly big and in most cases are caught on heavier line classes between 50-100lb while targeting red emperor, so they really don’t stand much chance of bricking you.

Coronation trout aren’t all that fussy when it comes to bait types. They will take a wide selection of dead and live baits but the humble pilchard works very well as long as smaller fish such as hussar aren’t around in big numbers and taking baits before they even reach the bottom.  If this is the case, use large flesh baits to ensure the coronation trout get a chance to eat the bait before the smaller fish do.

When fishing the shallow areas on the Great Barrier Reef, coronation trout will take a huge array of artificial baits. Plastics, hard-bodies, stickbaits and poppers are all effective over the shallow reef bommie areas.

Thanks to the thousands of people who have bought my DVDs. The support and feedback continues to be fantastic.

If you would like to buy a copy of Double Island Point & Beyond or Breaksea & Beyond, go to www.wickedfishing.com.au

Previous Tips when trolling for jacks
Next Tactics for Tough Fishing