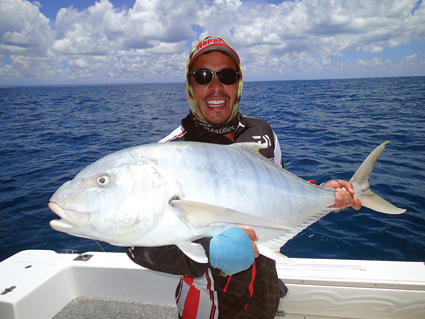 WORKING as a guide means you will regularly contend with less than desirable angling conditions, be it weather, fish moods or fish numbers. But you get paid to put fish in the boat, so that’s what you aim to do even when it’s tough fishing. Whether it’s one or hoards, you can’t let anything get between you and the fish.

Mentally you must remind yourself that fish are catchable and there is always something you can try or do, but it’s important to be mindful of the moment you are experiencing. When conditions are tough I suggest you lock down and focus on what you know best and work with what is there at the time.

Leaving fish to find others is a big no-no. Instead, camp on those you have found. If an area has shut down, leaving to find more fish will often simply result in finding another group of unresponsive fish. This reminds me of an occasion when I fished a BASS Electric Series competition in my canoe many years ago.

After an early start and smashing a few fish first thing the bite shut down. Towards the end of the time allowed for fishing I came across my mate Baden Sparrow, fishing for deep suspended bass. He was generous enough to allow me to share his find (even though I think at the time he only had one fish in his bag), which I did for a short while.

Only getting a few plucks, I decided to hunt around to find a bigger bag of bass. I didn’t even manage a bite, and from memory Baden took it out, beating me by a narrow margin. This lesson has stayed with me to this day. Defeat is never a bad thing if you can accept it.

Anyhow, on a recent day in Hervey Bay the bite slowed. There was no surface feeding and the fish down deep were a little unresponsive too. So what did I do? Well I basically camped out on any fish the conditions allowed me to find. If I found five fish in a small area, I stayed there. If they were biting I stayed until they stopped. And by biting I mean potentially one or two times an hour.

If the rate was higher, great. It sounds boring, but if you can land solid fish out of windy conditions and away from marauding sharks and pressure from other boats, I suggest you do it. It requires nerve and steely determination to resist the urge to move but I assure you there is no greater pressure than day after day guiding paying guests who are hoping to find the fish of a lifetime.

Often these guests have no experience or understanding of the basics, let alone the finer points of fishing. I am no super human. If I can do it you can too. It certainly is better than doughnuts for dinner.

Another thing to consider is technique selection and confidence. I often match guests to techniques that will suit them. Suddenly forcing them outside their comfort zone is often counterproductive. I suggest you do the same and when it gets tough go back to what you are most confident in.

This is where it also pays to be versatile and confident in a tackle box full of techniques. Gain the confidence before the tough bite arrives. I will throw the whole tackle box at the fish to get a bite.

While my guests are doing what suits them best, I am searching and probing with other techniques, always watching for some sort of reaction from the fish. Like any other form of hunting, you must be switched on at all times.

In early January I had the same two guests, Danny and Michael, for four days. Now these boys were fairly competent anglers but did very little deep luring. It was obvious the guys could catch fish, I just needed to find what they were best at. I had already found the fish through previous trips, and each day I chose the best place out of the wind.

By the second day the boys had a favoured technique each, one with a Jackall Transam fishing slightly more aggressively and the other with a lightly weighted Z-Man GrubZ fished slowly in extreme finesse mode. All I did was hang in tight to the very few fish I found.

This was hard work but resulted in a number of really solid specimens. The highlights were Danny scoring an excellent 115cm queenfish and Michael landing a 110cm trivially. Now, as I said, no mind-boggling new lure or technique was involved; I just figured out a system that worked for us as a team. We caught fish, so I didn’t change it.

Credit must be given to the boys because they fished as hard as me, relayed every bump and strike and tried every change in technique. I simply helped them decipher the data they were collecting. In the meantime I tidied their techniques and reminded them of the basics when they needed it, sometimes quietly like a mother to a child, and at other times with the force and urgency of a drill sergeant.

And most of the time all three of us were focused, alert and waiting for ‘that’ moment.

Visit Tri's Fraser Guided Fishing Facebook page @ https://www.facebook.com/FraserGuidedFishingWithCaptainSquinty?fref=ts or give him a call on 0427 230 261 to book a charter.
Previous Guide to landing coronation trout
Next Work with the wind in Lake Monduran