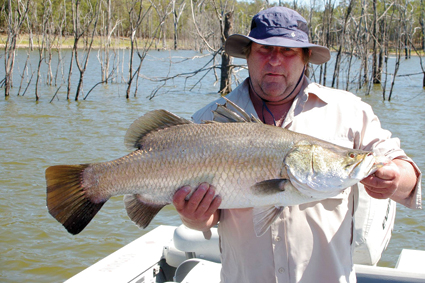 This 85cm barra was caught by Rod Kneiland while on a Lake Monduran Barra Charter with Jamie Bein.

Work with the wind in Lake Monduran

BECAUSE I didn’t have an article in the January edition, I hope everyone had a safe and happy Christmas and New Year and was able to get among some good fish. Lake Monduran was tough to say the least over the Christmas period and into January, and really lived up to its reputation of being the lake of a million casts.

Though plenty of barra are showing up on our sounders, getting them to bite our offerings is another thing altogether. Monduran’s water level quickly rose by 60cm after storms in early January, shutting the barra down and covering the weed beds. Thanks to the hot weather we are having the weed should soon push back to the surface and give us good areas to fish once more.

Hopefully this small rise in capacity will see lily pads reappearing in the lake because barra love hunting around them.The fish being caught have come from bays with the wind blowing into them, and at this time of year we usually have either northeasterly or southeasterly wind. If the wind is blowing from the north, try the southern end of Bird Bay, Rainforest Bay near the first cut through, Pig Pen and the large bay on the southern side of the south arm of B up past Pepper Point.

If you hit the water and there’s a southerly wind, try the northern end of Bird Bay, the north arm of B, Insane Bay, top of the Two Mile and the western side of Jacks. Water temperature will not be a problem unless we have a long period of overcast windy days, because in February water temps usually hold in the high 20C to low 30C range.

Another top spot that seems to have been forgotten is the point on the southern end of the entrance to Bird Bay. It is a great place to fish in the late afternoon and into the night. Anchoring off the point and casting back towards it is often very productive because you have really deep water on the basin side coming up to shallow water and then slowly dropping off again into Bird Bay.

As far as lure selection goes, suspending hard-bodies are still working well but soft plastics are making a big comeback. The new kid on the block is the Zerek Flat Shad, and in both 5” and 7” sizes this lure has accounted for some quality barra over the past month. I would definitely pack this lure in my tackle box if chasing barra. It can be fished with either a slow rolling retrieve or a twitch and drop retrieve.

As all true barra anglers know, the barra season reopens at midday, February 1, and in my opinion this should be recognised as a Queensland holiday. The end of the closed season will mean we can once again target barra in the Kolan River below Monduran, which is going to be a bit harder than it was when the closure began in November. The main reason being the Kolan has clogged with weed fairly badly and the usual land-based hot spots such as Bucca and Smith Crossings are nearly impossible to fish.

Kayak fishing is still OK but the amount of weed in the river means it might take a bit of time for fishos to work out how it has affected the barra.
But there’s only one way to find out and that is to get out there. One of the many things I love about barra fishing is it’s always changing. That’s all for this month.

If you’re heading our way, call in and have a chat to me or Jacky and get the up-to-date local knowledge on what’s happening on the barra scene in the fresh or salt and check out all that’s new on the market. Don’t forget our website www.barratackle.com.au and check us out on Facebook.