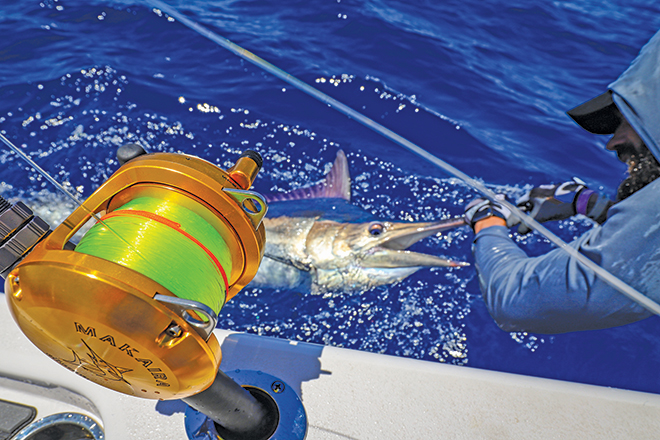 Having a look at lines and leaders

I thought I would look at why we have different types of lines and leaders available to us as anglers. lines leaders braid

Each spool of Platypus line is touched by about eight Aussie workers before it has even reached the couriers and then our favourite tackle store. lines leaders braid

Advantages with braided lines include almost zero stretch for increased feel and hook setting power, finer diameter for increased line capacity and reduced drag in the air for longer casts.

Reduced drag in the water means that lures can run deeper, plus we can now get our presentations down deep in stronger current.

Apart from these individual characteristics, we commonly have the option of 4, 8 or 9-carrier braid.

Carrier refers to a single strand, which is in fact made up of many tiny fibres, so a 4-carrier braid is made up of four strands, and four bobbins criss-crossing to create the finished braid.

A set breaking strain of braid will require four larger strands or eight smaller strands, and this basically defines the differences between 4 and 8-carrier braids.

You will find that 4-carrier braid is often cheaper to buy because for starters larger raw material strands can be low cost and it’s generally faster and econimcal to make as there are less strand breakages during manufacturing.

The four larger strands generally create a thicker diameter and a coarser feel, with some fishers such as finesse anglers preferring the rounder and smoother profile created by eight finer strands.

Though the four larger strands have their advantages, including increased shock strength and increased abrasion resistance, which sees them favoured at times by anglers fishing structure – cutting through weed and lilies while better standing up to timber and other structure.

As mentioned, 8-carrier braid with its eight finer strands has a smoother and rounder profile and a finer diameter that sees it favoured by anglers requiring increased line capacity and longer casts, especially with lighter lures.

In open water away from heavy structure, there is no doubt that the finer diameter and smoother finish is advantageous to anglers, with many investing in a quality 8-carrier braid.

A less common option is a 9-carrier braid which basically consists of an 8-carrier braid with an additional centre strand that runs up the middle during the braiding process.

This gives the braid an engineered round profile, even under extreme fishing conditions and the pressure of large predatory species.