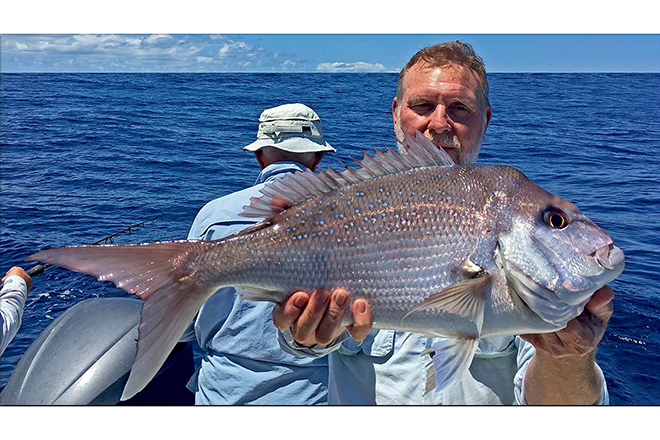 Heading out early to beat the winds

With the winds coming up early on most days it was a case of heading out very early if fishing offshore or using one of the many sheltered locations throughout the Noosa River to fish.

The few boats that did head out for the first light bite shot to Sunshine so they were not too far from home. The fish of choice was of course snapper, sweetlip and the odd cobia. With good shows of bait it was a case of dropping paternoster rigs to the bottom and getting stuck into the bite. Pilchard floaters were in need of a little extra weight from the subsiding spring tides but were still a great option for those sitting on anchor.

On Saturday we did see winds and swell drop which saw a steady brigade of boats go far and wide. The popular reef was definitely North reef and we saw some solid snapper, mixed reefies and cobia coming in. Of course these fish took the standard paternoster rigs and pilchard floaters. If you are headed out that way be sure to carry a few spanner crab dillies with you. The sand patches toward North reef are good hunting grounds and nothing beats a feed of spanner crab! For those anglers staying in close and searching for an early season Spanish mackerel having a Spaniard special in tow greatly increases your chances of hook up with added vibration this big lure produces. Having a look around Halls reef is one of the best options. If unsure how to rig this lure be sure to ask the boys in store.

Back on the land the surf fishing continues with smaller fish and an occasional larger flathead. The river mouths of Noosa and Maroochy providing anglers with an option to move around with the wind and stay connected to lighter gear. These are the places to let your baits move with the current as they often find the fish schooled up behind a sand bar or just out of the main current flow.

Inside the river we are seeing a continued run of good sized flatties. The lower estuary is definitely the place to find these fish and with the morning run out tides made for great timing for all. Baits to use include whole fish and slab baits. Prawns work well as do long squid strip baits. These have the ability to move about in the current which creates interest. Be sure to use a baitholder style hook to keep squid pinned straight on the shank. If flicking lures then soft plastics work well and nothing beats a curly tail grub like the fat bodied entice grubby 3.5” which has great presence in the water.

Mangrove jacks are starting to wake up and reports are coming through on a regular basis now. For jacks you can target the rock wall, jetties and bridges around Noosa or jump in a boat and hit the snags and points where ambush points are created during run out tides. All methods work for jacks from baits consisting of prawns to plastics and everything in between. For bait anglers mullet is great and stays on hooks very well and resists small fish until the big one comes along. For lures weedless rigged plastics cast into the snags and burned or slow wound out is also deadly. Come and ask us how to tie an FG knot if using braided line as most other knots will pop under the pressure of fighting such an apex predator.

Elsewhere throughout the river you can expect to find whiting and trevally. If after trevally be sure to have a go during the incoming tides early morning and look around Munna bridge and woods bays. If further upstream have a look throughout the ski run and the various drop offs and snags along the edges. You can also find jewfish along here especially as you get to the Jew hole and beyond to the stretch known as between the lakes.

Freshwater is warming up and we have seen some great bass and toga coming from the local waterways. Surface, subsurface and sinking lures are all worth using and keep an eye on the weather and what creatures and bugs are in the air. If it has rained try casting small surface frogs from the edges of the lilies and work them out slow enough to entice a bite. Once the sun has risen be sure to switch to hard body lures and work the edges. Bass are also schooling up in the deeper water and here smaller jigs are working well by dropping them down deep and basically annoying the fish until they bite. Have a go at the hot bite gang banger lures for deeper sections and even troll these through the schooled up fish for a cracker bass!