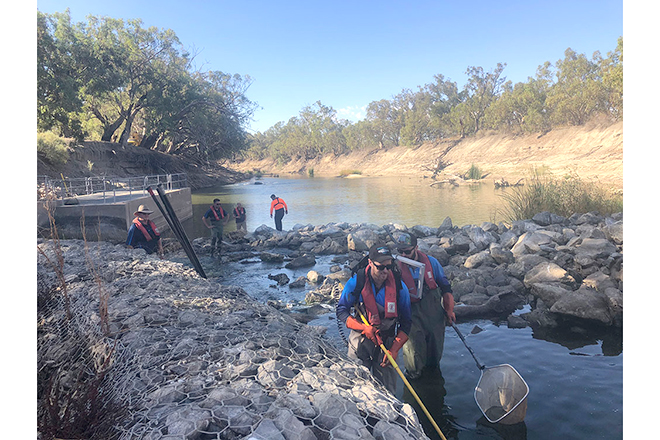 The NSW Government has successfully relocated more than 1100 native fish as part of a targeted fish rescue operation in the Lower Darling, where drying pools and warming temperatures pose an imminent threat to fish survival.

Minister for Agriculture Adam Marshall recently visited Menindee and the Lower Darling River where the latest efforts were focused.

“The relocation operations have been hugely successful in relocating over 1,100 native fish including Murray Cod, Golden Perch and Silver Perch,” Mr Marshall said.

“This is a great result but I am also aware there is a long summer ahead and unfortunately our teams will not be able to remove every fish from every pool along the river system.

“This massive relocation effort is taking place to ensure the survival of the State’s key native fish species while NSW continues to battle through one of the worst droughts on record.”

As part of his visit to the area, Mr Marshall also announced an aerator will be installed in the Lower Darling later this month.

“Last summer we used aerators to provide relief for struggling native fish and the preliminary scientific analysis found they were successful in that endeavour,” Mr Marshall said.

“We realise the best solution is more water however until it rains we’re looking to options such as aerators to help save key fish species.”

The rescue operation is part of the NSW Government’s $10 million Fish Rescue Strategy, which includes: targeted rescue operations, the State’s largest ever breeding program of native fish, expansion of the Government’s flagship fish hatchery as well as working with recreational fishing clubs and private hatcheries across the State.