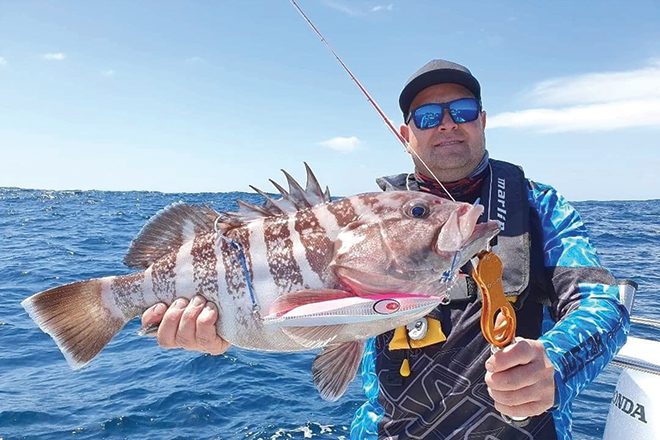 Brad with a nice bar cod from the wide grounds off Ballina.

HELLO and welcome to this month’s edition of BNB.

I can’t believe I am about to say this given I live on the NSW Northern Rivers – but oh my goodness we need some rain!

Now I know plenty of others places around the state and entire country need rain, however, given this has to be one of the wettest places in the country, things have to be pretty dry for me to say that. My only hope after this long dry spell is we don’t have the drought broken by a flood.
Everyone has suffered enough with the drought, and now some areas are dealing with horrific bushfires, so please Mother Nature, go easy with the rain when you decide to finally drop it on us.

On the plus side is the fact I have not seen the water in the Richmond River this clear in a very long time. So clear in fact that we are already seeing a good run of blue swimmer crabs. Normally we don’t see blue swimmers in these numbers until it is almost Easter, the bulk of the summer rain and floods have occurred and the river has had a chance to clear.

I think we will see an increase in their numbers if we don’t cop any major flood events for summer, so get out there and make the most of it. Mud crabs have been a little disappointing in contrast, and I think a bit of fresh in the river would get the mud crabs moving around more.

Like the blue swimmers, I think the muddies will improve in numbers as the summer goes on and the water temperature continues to climb, so get your gear cleaned up ready to go. Both North and Emigrant creeks are going to see activity over summer, along with the main river between the Burns Point Ferry and Rileys Hill.

Please remember you can’t use crab pots from the mouth of the river up to the Burns Point Ferry, including North and Fishery creeks.
You are permitted to use witches hats/dillies in this area though, and you are allowed four per person.

I think the best bet to catch a fish in the river at the moment is to move around and cover some ground. The long dry spell has meant the water is very clear and the fish seem to be spread over a much larger area than we are used to. Bream are in better numbers along the rock walls, and seem to be spread from the RSL club all the way to Rileys Hill.

Flathead are slowly making their way down the river, but better numbers are upriver between Pimlico Island and Broadwater. Early morning they seem to be up a little shallower and sitting on the sand flats, but as the days heat up it will be a better option to push out into the deeper water where it will be cooler for them.

The usual baits such as white and blue pilchards have worked best, but it will be worth trying metal blades and larger soft plastics to help you stay closer to the bottom and in the strike zone for longer. Given the super-clear water, I would stick with the more natural colours until we see a little rain and some colour in the water.

The beaches have not seen any great improvement over the past month. We are still only seeing a handful of flathead, bream and whiting on most beaches. Worms and pipis have been working on bream and whiting, while flathead are still showing interest in white pilchards and mullet fillets. I have heard of a few captures of tailor in the past couple of weeks, but they continue to be very quiet, as they have been all winter.

Usually we see a run of better than average tailor over summer, and while their numbers aren’t as good as in winter, the quality of the fish usually makes up for the lack of numbers, and I am hopeful this is the case this year. Pilchards and cut baits such as mullet and bonito are good options for these larger-than-average fish, particularly when trying your luck at night.

Offshore has been fishing fairly well of late, with quality fish coming from the 32 and 48-fathom lines and beyond. The current has started to increase for summer, but it is still at a level that isn’t making it impossible to fish just yet. Good-quality snapper and flathead have come from the 32s on both baits and lures.

The northern 48s are holding quality pearl perch that have been taking live and dead baits. The FAD is out for summer, but as yet has only produced school-sized mahi mahi. Once the current and water temps really pick up we should see an improvement in their numbers. Funnily enough, the current that has started in closer still hasn’t shown up out wide, and some boats have been pushing out to the continental shelf to get the odd day in before the current really picks up for summer.

A mix of kingfish, flame-tail, bar cod, gemfish and blue-eye trevalla have all hit Eskies of late, but you will have to make the most of it before the current kicks in and wrecks the party out there for another summer.