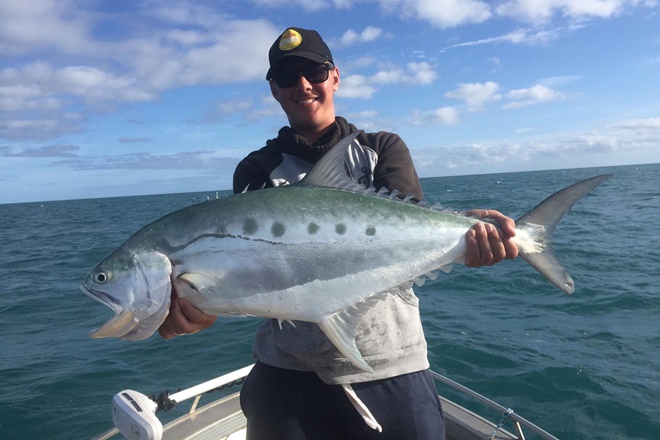 Mitch with a beast of a queenfish.

HI all, I hope everyone has been getting stuck into a few fish since last month’s edition of BNB.

I have been taking full advantage of the Easter school holidays, enjoying fishing in both local and out of town destinations. I recently had my first experience of the bluewater fishing options at Hervey Bay with good mates Mitch and Josh. For as long as I can remember, I have wanted to head to Hervey Bay in search of pelagic and bottom fishing action, and after seeing all the photos popping up on social media of red-hot action in the area, I knew I had to check it out for myself.

We departed Brisbane early on a Monday morning with our 4.8m Sea Jay in tow behind my Toyota HiLux and enough gear to open our own tackle store. We were filled with excitement and anticipation. The weather forecast was looking awesome and we made plans to venture up into the northern bay in search of longtail tuna, golden trevally, mackerel species and anything else we might encounter. However, for the first afternoon we stuck close to Urangan and scooted out to the nearby islands.

First cast of the trip saw Josh bag a nice trout, which completely spun me out. It was like we had left from Cleveland Point and were fishing at Peel Island catching tropical reef fish. He followed it up with another just-legal model soon after. Both were tagged and released. We continued fishing our way around Big Woody Island and kept popping tags into all kinds of fish species including grass sweetlip, trevally and juvenile coral trout. The afternoon progressed and the sun was setting, and satisfied with the start to our trip we headed in.

Plans were put in place to leave from Burrum Heads the following morning and make the big run out to the infamous ‘Gutters’ off the top end of Fraser Island. We planned to make a few stops on the way at some marks, and possibly have a cast for any surface pelagics we spotted on the way out. I hardly slept a wink that night because I was so excited. Our alarms went off at 4am and we were on the road not long after. The boat was in the water just on sunrise and we headed for the close reef off Burrum because some wind chop was still left over from the previous night.

We marked good Hervey Bay shows on the new Humminbird Helix 12 G3 and sent down plastics and Zerek Fish Trap vibes. It wasn’t long before I connected to a good fish. My Wilson Venom baitcaster was buckling over and line was getting ripped off at a rapid rate of knots. The fish began coming to the surface and I knew it was a big golden trevally. Unfortunately, the hook pulled only a few metres from the net, but I wasn’t too fazed because we were about to run north to further ground.

About 15km from the grounds we saw a massive flock of diving birds and just couldn’t resist stopping for a cast. Within seconds, Josh and I had a double hook-up on large mack tuna, and while these weren’t exactly our target species, it was great to get the ball rolling. What followed was two hours of chaos. At one stage we had longtail and mack tuna, mackerel and all manner of other critters busting up 360 degrees around the boat. We were having double and triple hook-ups, making for serious carnage. Mitch and I even had a double surface hook-up on big spanish mackerel but we were both unluckily bitten off after a few minutes of fighting. Hervey Bay was turning it on!

It was great to see Josh land his first longy, and it was also good to be able to relax and have a laugh while catching these often frustratingly flighty fish. We decided we’d had enough fun with the tuna after landing a few longies each and countless mack tuna weighing about 5kg. I aimed the bow towards the mark we had for the Gutters and began the long run out.

We were in glassy calm conditions but the forecast said the wind would pick up mid to late-afternoon, so I was wary of that while running further from the ramp. I had a general mark for a ledge, so upon arrival I started sounding around, employing the same technique I use offshore. I could not, for the life of me, find what we were looking for. However, I did find a small 2m-high rise on the bottom that appeared to be stacked with fish. I sent down a pillie on a gang and it didn’t even touch the bottom before getting nailed. I got absolutely towelled up on 50lb gear and a locked drag. We had a few more bites and hits but apart from that it went very quiet.

I could feel the northerly sea breeze starting to puff, so we didn’t hang around much longer. We ran back to the ramp pretty stoked with how the day went as we all caught a load of fish and had a barrel of laughs while doing it.

The next day we tossed up whether we would fish the Fraser side of Hervey Bay or head back to where we were the day before. The weather didn’t look great and we thought Fraser would offer some protection, so we decided to travel that way as I hadn’t been there before. It wasn’t long before we had our drags smoking again. Josh and I started the day with a double hook-up on cracking longtail tuna. They gave us an awesome fight on 20lb gear, which was a lot lighter than the 60lb stickbait rod I was swinging the day before. Mitch followed it up with a belter of a queenie measuring over 1m.

A seemingly endless supply of spotty mackerel was around, which made for great fun on plastics and slugs. Mitch and Josh were both lucky enough to land big broad-barred mackerel without being snipped off, whereas I was unlucky multiple times and donated a lot of tackle to the toothy critters. We’d had enough fun playing with the speedsters, so decided to make the big run up to Wathumba Creek to chase golden trevally at the top of Hervey Bay.

It was definitely a long trip and the rewards were minimal, but Mitch did manage to pluck a golden off a bait school marked on the sounder while travelling at speed. Having quality electronics and correct transducer placement can be the make or break of catching fish at times. I was glad the big Humminbird Helix doesn’t miss much, as we had potentially run over 60km for no reward, but this one fish made it worthwhile as we had ticked our final species off the list for the trip. We were stoked!

On the way home we stopped at Moon Point and jumped out for a walk along the beach on beautiful Fraser Island. A massive southerly change was coming, and we stupidly overstayed our welcome, getting caught out and nearly flogged to death on the way home. Once the boat was back on the trailer, the realisation kicked in that our trip had sadly come to an end.

Weeks of planning and preparation had paid off and we had enjoyed an absolute ball of a trip. It won’t be long until I visit this location again because I have barely scratched the surface of what’s available in the amazing waters of Hervey Bay and the Fraser Coast.

Until next month, smoking drags and sore arms.