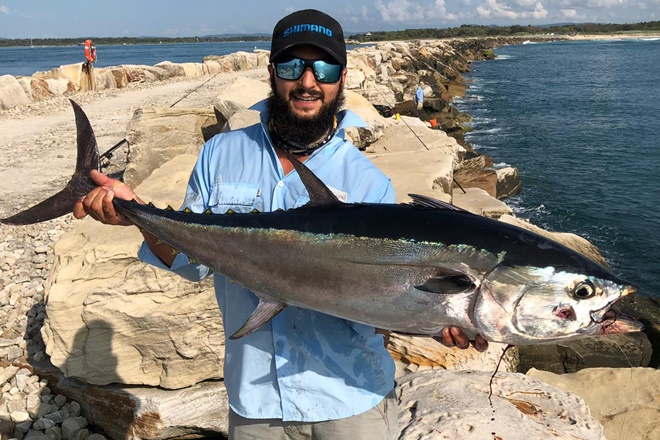 After catching his jew, Mkay refocused on tuna fishing and nailed a quality longtail tuna on a live gar.

AS I predicted last month, April saw longtail tuna, jewfish and tailor dominate catches along the Iluka/Yamba breakwalls and most of the headlands here on the mighty Clarence Coast of Northern NSW.

Catches of spanish mackerel from the walls have come to a grinding halt, however given the large numbers of tuna about, they would have to be quicker than normal to get a bait. Sydney anglers Moozy, Mkay, Milly and Hank Crimpy made a recent trip chasing tuna after getting a few tips from Sydney land-based game fishing guru HT who must have given them the good oil because all the lads managed to snare a tuna on their trip.

Milly and Mkay got their fish on the first day of land-based game fishing action, with Hank hooking up in the middle of the worst storm we have had this year, while Moozy lost fish in every way imaginable but came good on the final day, eventually snaring a tuna on live gar after missing and dropping four fish earlier in the day. To top the trip off, Mkay got bored fishing for tuna and decided to have a go for jew on the river side of the wall in the middle of the day and was rewarded with a nice fish.

I am trying to get the lads back up here in winter to fish for jewfish so I can show them what really happens on the Clarence River after dark, as I am sure they would not see it around Sydney. The downside to the hot tuna bite is the bogans that masquerade as fishers that gaff a tuna, spend a lifetime taking pics and then spear the fish back into the water, only for it to surely die due to fatigue and blood loss or be dinner for a shark, then leave all their rubbish among the rocks. If you want to release a pelagic, either net it or tape a knife to the end of your gaff and cut the line close to the mouth, instead of impaling it with a gaff for ego’s sake. Actually, bogan is not the right word for these losers, I reckon wanker is much more fitting and as the saying goes: “all the gear but no idea”.

Talking of jewfish, young Gulmarrad angler John Dowsett hit the scoreboard early with an early season jew on live mullet from the T-Piece on the Yamba wall. May will see the winter run in full swing, not only here on the Clarence River but all the rivers north to the border, with the trick to success finding out where the flat-tail mullet hold up in each river, then fishing those spots on the slack high tide after dark.

The top three spots here on the Clarence River are the green lights on the bottom end of the Collis Wall and the Turkeys Nest wall for those with a boat, while the T-Piece on the Yamba breakwall is the spot for the shore-based anglers as large schools of mullet hold here all winter. The southern end of the Iluka Bluff has been the pick of the local headlands for smaller schoolies around the 8kg mark, with the odd bigger fish to 20kg being taken in the middle of the day during the low water and the first couple of hours of the making tide.

Good jew fishing will be had spinning at night, however, I would much prefer fishing the daylight tides on the rocks, then snooping around the rivers at night. Using soft plastics off the headlands will see you get plenty of schoolies and the odd bigger fish, but if you want to consistently catch large to huge jewfish, use any shallow-running (1m maximum) 14cm hard-bodied minnow-style lure and you will see the difference.

Tailor are still around in big numbers, with Danny Wicks and Rhyan Buckley of Yamba having a ball at the Bluff and landing top fish to about 3kg, with double hook-ups very common. Tailor of a similar size are also coming from Main Beach, Back Beach and Shark Bay here at Iluka on bonito strips and whole garfish, while over on the southern side of the river Lovers Point and Plumbego have both seen top fish taken on lures.

Offshore catches are being dominated by mackerel and tuna, with most boats trolling for these fish, however this month boats will begin anchoring and laying out a good berley trail that will in turn see numbers of solid snapper begin to be reported. Catches of big bream will also begin to improve as the fish move into the lower reaches of the river systems to spawn.

All in all, May is looking to be a cracker month and I will be hitting the headlands during the day when the swell is running, then snooping around the river after dark for a jew.