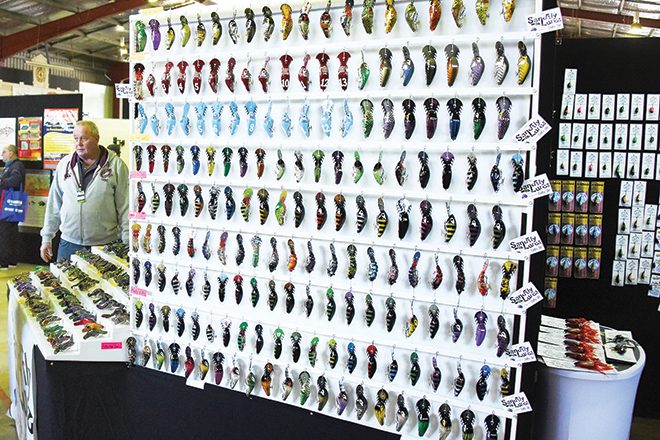 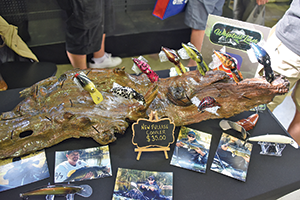 From its birthplace in Fernvale in the Brisbane River Valley, it first migrated downstream to Ipswich after a couple of years of seam-bursting crowds. From there, Ipswich seemed to be a great fit for the show, which attracts about 2000 keen anglers and lure collectors each year.

The trouble is, a multi-million dollar renovation was granted to the Ipswich venue, and the show needed to move again. There are a few things the show needs to work. First, camping for exhibitors is a highlight for the tight-knit community of creators. Free parking ticks the boxes for attendees who want to maximise their spend at the show, and a fair gate price (around half the cost of a national boat show ticket) of $10 keeps the gig accessible to nearly everyone – especially kids, who enter for free.

After several months of searching, the show landed midway between Brisbane and the Gold Coast. It will be held at the Beenleigh Showgrounds on June 1 and 2, 2019.

The good news is there’s plenty of free parking, camping is available and it still costs the same as it did back when it started – $10 for adults and kids under 16 get in for free.

The Beenleigh arena is a little different from Ipswich – there’s less indoor space but better outdoor space. At the time of printing, all the indoor stands were sold and the outdoor sites were filling fast.  Being a little more open than Ipswich, there’s now room for a fly casting demonstration and trial area, outdoor carving and sanding demos, and even some boats at the Social Media Hub and Presenter area.

One of the highlights of the show is the extensive collector displays and collector trading area. This year, that’s the whole of the upstairs mezzanine floor. You can be guaranteed there’ll be some deals flying around that space for the show’s duration.

Want to bring in your old Australian timber lures and have them valued?  No problem – there will be people there who can let you know exactly how much that old gem you have in your tackle box is really worth.

Always popular is the lure test tank. Available to all exhibitors so they can show you how their creations swim, it adds that extra dimension to your purchase. I mean, how many times do you get to see how the lure behaves in real life before you part with your hard-earned cash?

Just quietly, getting instruction from the person who created it is probably worth as much as the lure. There’s nobody who knows how a lure behaves better than the person who made it.

Want to catch up with some of the guys and girls you usually only get to see on social media? The Social Media Hub will again feature presenters like Rod Harrison, John Costello, Jake Newmarch, Liam Fitzpatrick and Steve Morgan. You can take this opportunity to ask questions, get a selfie and hit them up about all things fishing.

Lure of the Year awards

Each year, the standards seem to rise for the Lure of the Year awards. Voted on by fellow exhibitors, the awards reward clever design and amazing execution of concepts, with a trophy and the accolades of your peers. You’ll be able to see a full collection of nominated lures in the display cases inside the main entry to the show building.

You don’t need to go off-site to eat and drink, with Gabby and her team dishing you up all the food and drink you need. With both outdoor and indoor seating options, you’ll be able to rest and recharge before getting back into the action. Note that a couple of ATMs will be on site as well. The Lure Show team definitely encourages spending beyond your means!

Beenleigh Showgrounds is surrounded by plenty of free street parking, but on the Saturday of the show, the markets area (just to the west of the show) is available to park in and is an easy walking distance from the gate. On Sunday, the Beenleigh Markets will be in full swing, so parking will be limited to the street, but there’s still plenty of it. If you’re getting there via public transport, the Beenleigh train station is an 11-minute walk away.

Last year the Lure Show trialled an early entry ticket for collectors and visitors who wanted to spend up big in a less crowded environment. The 100 tickets sold out pretty quickly. There’s a version of the early entry ticket on offer again this year – $25 to get you in an hour early.

These tickets are only available online and are limited in quantity.

For these tickets and all online ticket sales, visit lureshow.com.au with your credit card.

Print the tickets after you buy them and bring them with you to the gate.

We look forward to seeing you all at Beenleigh!