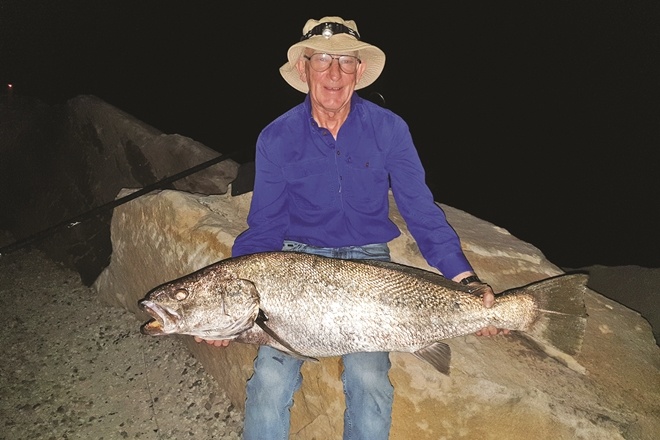 Grahame Dowsett of Gulmarrad scored this quality jewfish from the ocean side of the Yamba breakwall using live yellowtail as bait.

Hop onto the headlands!

ANYONE who has caught a jewfish will almost certainly have encountered worms inside the fish. Be it live wriggling reddish nematodes – or roundworms – in the gut cavity or the smaller white spaghetti flatworm trypanorhyncha, both are believed to use jewfish as a host before moving on to another species. Headlands hop

While the sight of either of these worms in a fish may be somewhat off-putting, the fact is that neither of them are directly harmful to humans. The worms in the flesh are easily removed, though if you have any doubt and fear being harmed by eating the flesh, you can either freeze the meat for two weeks at minus 20C or simply cook the meat well before eating. Jewfish are not the only species affected by these worms.Headlands hop

Both kingfish and cobia also carry them, along with other species – I have cleaned the odd luderick and turrum with spaghetti worm in its flesh. At last count a few years ago, my tally on jew was around the 5000 mark, so needless to say I have seen my fair share of worms in fish, but I have never seen as many worms in one fish as the massive bunch that was in the stomach of the jew caught by Grahame Dowsett of Gulmarrad.

When his lovely wife Fran first sent me the picture, I thought she must have dug up a heap of bloodworms out of her garden for freshwater fishing, but that was not the case.Headlands hop

Speaking of Fran and Grahame, they recently had a ball night fishing the Yamba breakwall using live yellowtail during the rising tide, and they hooked five very sizeable jewfish in one session. Unfortunately for Fran, Grahame was the only one to put a fish on the rocks.

However, she was over the moon at being stretched big time by a huge fish that eventually broke off along the rocks, which goes to show you can still have a great night angling without actually landing a fish.Headlands hop

Fishers have taken similar sized fish on the Iluka breakwall using fresh squid, as well as at the southern end of the bluff on minnow lures. I haven’t picked up a rod for past two months, however I have tagged along with my son Mischa and his girlfriend Rebekah when they chased a feed of flathead at night on lures.

Tailor have been messing around recently – one day at the Iluka Bluff you almost get tired of catching them on metal slugs, then for the next week or so you can barely scratch up a feed regardless of what lure you throw. Inside the mighty Clarence River, whiting and flathead continue to dominate catches, which is to be expected during summer, with both species being taken from most vantage points.Headlands hop

I know I may sound like a cracked record, but I much prefer to fish for whiting at night –I’ve found a much better class of fish plus both boat traffic and angler numbers diminish dramatically, which makes for better fishing. Quite a few large bream can be had by floating a white pilchard or prawn around the wash off the headlands when sea conditions allow, however while they’ve been long in length, many are in very poor condition.

I have found this to be common during summer, as the fish are in a recovery mode after spawning during winter, and more often than not on gutting the fish, they are full of shell grit and crushed barnacles, and will smell like no tomorrow if you accidently puncture the gut.Headlands hop

Luderick are another species that move back out of the estuaries to around the breakwalls and headlands during summer, and hordes of these bronzed critters can often be seen in the waves around the rocks. During the last week of November, the first handful of spotted mackerel were boated in the warm shallow waters off Woody Head by those who went looking for them, but I must point out that there were only a handful.

Having said that, the run will be in full swing at the end of December and early January, which is news I love to hear because it means we’re only a month or so from the start of the land-based season, when nice longtail tuna and spanish mackerel are taken off our headlands and breakwall. Those wanting a head start, can get in early and fish for spaniard off the south wall at Ballina during the Australia Day long weekend – when the first fish of the season was almost always taken in the 1980s.Headlands hop

In early February, the rocks around 12m at Evans Head will come alive, and by the end of February the first fish will be taken here at Iluka – as long as La Niña holds off and we aren’t in flood by then. The upside to flooding is that the pelagic species will go off the bite only for a short period, but jewfish fishing will be great.

If I had a choice, I would take a good dry pelagic season because it only lasts for four months of the year on the far north coast of NSW, while jew can be taken year-round. Having said that, the first thing I have to do is get my ‘tuck n roll’ down pat, so I can find my way off the lounge and finally go fishing – oh, decisions, decisions.Headlands hop

In a nutshell, January should see great offshore fishing for snapper, jewfish and spotted mackerel, while jew, tailor and turrum will be taken from the headlands on lures. Inside the rivers, whiting and flathead will continue to dominate catches, along with the occasional school jew, and if you enjoy a feed of crab there should be a few blue swimmer crabs around as well.

Along the breakwalls, use octopus during the day on a high tide and live yakka or mullet at night – or even a nice whole or stripped squid for the jew of your dreams.Headlands hop

Surely 2021 has to be an improvement on 2020, so do your darnedest, get out there and make it happen.