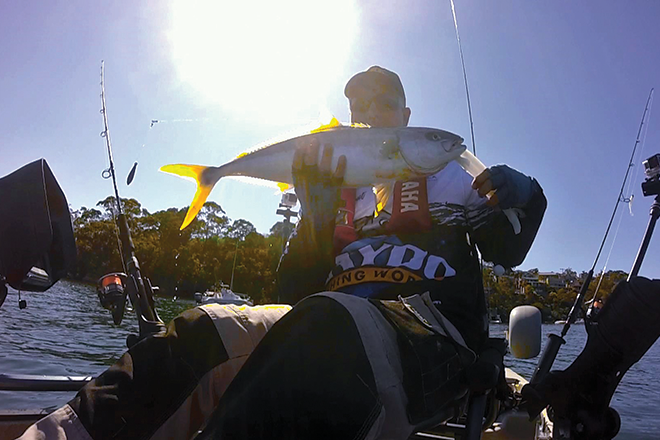 The author with a kingfish. Apologies for the average photo.

Chasing kingfish from a kayak

THIS month I talk about kingfish and how to target them effectively using live bait from a kayak.

The yellowtail kingfish is a natural inhabitant of the cool waters of southern Australia, though they can be found as far north as Rockhampton in Queensland. In Japan, where kingfish is known as hiramasa, it is a highly sought-after sashimi fish.

Let’s talk about bait. When it comes to bait, fresh is always best. And this doesn’t just apply to chasing kings, it applies to all species. You will get a lot more hook-ups on a tasty piece of bait compared to old bait. Try catching live squid, yakkas and slimy mackerel.

Most of the time, to conserve energy when searching for live bait on a kayak I’ll look for areas close to where I plan on fishing. On a recent trip, the bait of live squid was literally 50m away from the kingfish. When it comes to presenting live squid over wrecks or near structure or drop-offs, I use a running sinker with a snelled 8/0 circle hook in addition to a stinger or treble.

I pin the circle hook through the top of the squid’s hood and the stinger down near the head. Ninety percent of my hook-ups are on that stinger hook. If you aren’t using a stinger you might miss a lot of kingfish hook-ups as they bite the head off and miss the top hook. In my opinion, squid is the best bait for kingfish.

Squid are relatively easy to find and you can always freeze them and keep them for next time. You can troll with squid, drop them straight to the bottom, balloon fish them and fish them unweighted, letting them drift in the current. When it comes to tackle for chasing kings, it’s best not to go cheap. Buy quality gear because they don’t call kingfish tackle busters for nothing.

I use a 10-15kg Lox Kingfish rod that is specifically designed for targeting kingfish. It is paired to a 5000 Crucis reel with carbon drag loaded with 60lb Timber Wolf PE braid and 80lb Black Magic Tough leader. Lox has done a fantastic job in designing the Kingfish series of rods and they’ve got the strength and sensitivity to match. Let’s talk about the location I was fishing.
In the back of Quakers Hat Bay in Sydney is usually where I land my squid. Mostly they are only tiny squid no bigger than your hand, making them the perfect bite size treat for the kings. However, they come with their own set of problems.

These little squid hold in deep water (10-11m) and don’t really go for larger squid jigs, so I normally run a 2”, 1.5” or even micro squid jig with a tiny crimp-on sinker to get the squid jig down to the right depth.

The best part about this location is there’s plenty of shelter and places to fish for other species such as bream, flathead, squire and jewfish. Over time I have found the squid like fluoro pink jigs the best but I have also landed heaps on the more natural colours such as grey. In the same way as you need to buy a quality rod and reel to target kingfish, it pays to invest in quality squid jigs.

Not only will they last longer but they have a superior action, falling more horizontally compared to the cheaper ones, which seem to go nose diving. My favourite brand is definitely Yamashita. Yamashita has pretty much everything you could need, even heat jacket squid jigs that have a reactant fabric that glows when introduced to the water.

So I found the squid, rigged up and started to head over to the wreck about 50m away when suddenly I heard a loud ‘pop!’  I turned around and noticed one of the moored cruiser boats sinking. After racing over and making sure no one was in it or hurt, all we could do was watch and film it going down and notify authorities of the new wreck.

I then continued on to my fishing wreck, which sits just off the point of Quakers Hat Bay and rises about 2m off the bottom. I usually lower the squid to about 5m off the bottom, which gives me a few metres to drag the kings away from the wreck. This is where a kayak excels because you can silently keep yourself sitting in prime position over the wreck.

As a bonus, it’s so much fun having a big kingfish tow you along once you’ve hooked up. It’s of paramount importance to be familiar with what the kings look like on the sounder. For a better chance of a hook-up, you also need to be able to adjust the height of your bait in the water column so you are almost placing the bait right in their faces.

I like to mark out wrecks and fishing grounds so I know where my drift starts and ends to give myself the best chance of catching a fish. Currently I am using a Lowrance Elite-7 Ti and it has to be one of the best all-round sounders I have used. I hope this helps and sets you on your way to catching your first king or even just trying something new such as kayak fishing for larger species.

As always, if you have any questions or would like to see our videos, you can find us on Facebook at 2 Mates Fishin or make a comment below.
Have a safe and happy month fishing.

Caino started fishing at a very young age and was taught by his grandfather Peter (pop) Green. He spent countless hours on the beach with his pop and brother Jai digging for pipis and arguing with his brother about who caught the biggest fish. Caino specialises in catching estuary species but loves all forms of fishing. Caino believes he is lucky to have very supportive family and friends helping him follow his dream. Without their support, none of what he has achieved would be possible.
Previous Yamaha Marine Technician Grand Prix
Next Epic road trip into Kakadu 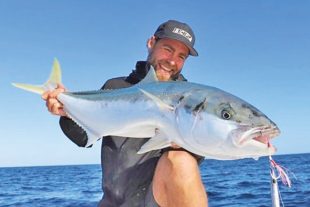 Jigging tips for AJ and kingfish

LIKE many, I hadn’t seen much of my folks due to the restrictions that were …