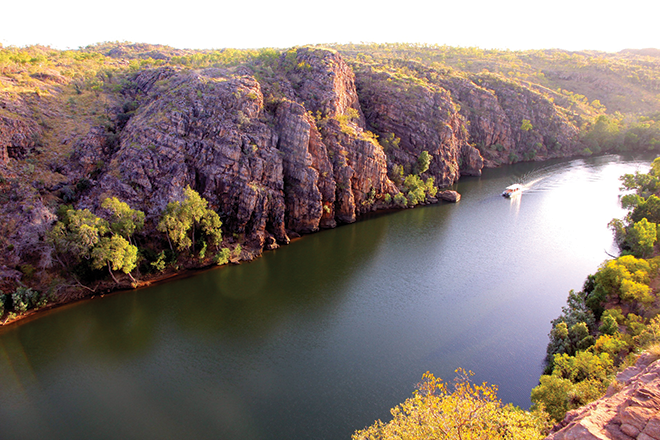 The view from the top of Katherine Gorge is definitely worth the climb.

KATHERINE and surrounds have a lot to offer the traveller, whatever their interests.

Wildlife is plentiful because of the permanent water in the river. Plenty of agile wallabies along with flying foxes and a variety of reptiles are present. Scores of bird species can be seen by the observant visitor, with red-tailed black cockatoos a personal favourite.


We also managed to find western bowerbirds, blue-faced honeyeaters and tiny peaceful doves in numbers along the riverside tracks near town. In common with most inland population centres, indigenous culture is thriving around Katherine. We visited Top Didj, now the home of the Katherine Art Gallery, just a few kilometres from the town centre.

Here you can gaze at traditional art from the Katherine region, which is similar to that of the desert regions to the south but differs enough to be quite unique. I have a leaning towards the ochre hues and less abstract style from the northern language groups, so enjoyed viewing the works of artists from that region including Manuel Pamkal, Ken Wark and Norman Lane.

Naturally, I could not resist the temptation to add another didge’ to my collection and bought an unpainted bloodwood instrument producing a nice D note, with a marvellous mottled pattern created by the different colours of heartwood and sapwood. While on the subject of art: later in our journey we met and chatted with Eddie Blitner, a quiet, well-spoken young man whose paintings depicting his region’s dreamings were particularly impressive.

No stay in Katherine would be complete without a visit to the renowned Katherine Gorge National Park. Postcard scenery and abundant wildlife are assured, especially if you visit at first light when the bush is at its best. We made the 30-minute drive from town to the Nitmiluk visitor centre in the dark to arrive at first light, then walked along the gorge track for the view at sunrise. The track has a few very steep sections that may prove impassable for those unsteady on their feet but the average person will cope.
Along the way we spotted a colony of black flying foxes, bird species too numerous to list and even got a bird’s eye view of a large freshwater crocodile cruising upriver in the gorge below.

Within a few hours of driving north along the Stuart Highway, the brown road sign for which we’d been searching came into view and we exited the Stuart onto the Kakadu Highway just south of Pine Creek. The scenery didn’t change much as we cruised along a very good bitumen road towards the southern boundary of the national park.

Dry plains lightly timbered with woollybutt and bloodwood rolled past until we stopped for lunch, our national park permit and fuel at the Mary River Roadhouse. This roadhouse serves excellent meals in the bar and my buffalo burger was consumed in quick time while gazing into an aquarium that housed a tiny freshwater crocodile (something you don’t see in too many pubs).

Just beyond the roadhouse is the entrance to Kakadu National Park, a name that should be familiar to all Australians and a must-see destination for any nature lover. Our first stop once inside the park was Yellow Water, a popular billabong where wildlife cruise boats operate for much of the year. We were visiting at the tail end of the dry season and subsequently, all the wetlands in the Top End were just puddles compared to their wet season capacity. This possibly worked to our advantage because all the bird and animal life was concentrated around the remaining permanent water sources.

At first glance, Yellow Water was disappointing at its diminished size, but a stroll along the boardwalk changed that view. Hundreds of little corellas were clowning around in the paperbarks above our heads and most of the expected bird species were present including brilliantly coloured kingfishers and the iconic jabiru.

Keen eyes spotted a couple of salty crocs concealed in the vegetation close to the boardwalk and a short wait rewarded us with a front row seat to a squabble between two rivals. Our accommodation was in the town of Jabiru, located fairly centrally to most of the attractions we wanted to visit in the park. Visitors to the park have plenty of options to cater to their interests and desired levels of activity.We chose to take self-guided walks rather than group tours for a couple of reasons. First, large groups are noisy!   That is a definite disadvantage if wildlife spotting is high on your agenda.
Second, we like to set our own pace, bypassing areas of little interest to us and taking plenty of time to absorb features we enjoy.

Nourlangie Rock is a picturesque bluff accessible by two-wheel-drive vehicles and protects several rock art sites of great significance. It should be on everyone’s must-see list. Some of the galleries are wheelchair accessible and good paths have been maintained throughout the area. Ubirr, at the northern end of the park, is an even more impressive rock art site with examples of some of the oldest painting styles in Australia as well as the superb X-ray style art of the Kakadu people.

Near the gateway into Ubirr is another iconic landmark, the East Alligator River and Cahills Crossing. Downstream of Cahills Crossing is a boat ramp with more large saltwater crocodiles per metre of river than I’ve seen anywhere! I snapped one photograph in which 11 crocs in excess of 3.5m in length can be seen sunning themselves on the bank.

One feature in the park we had not heard about was Mamukala Wetlands, a short drive east from Jabiru along the Arnhem Highway. Despite the very low water levels, the bird life here was astonishing. Unimaginable numbers of magpie geese and egrets dominated the scene and could be viewed from the exceptional bird hide. The calls of the thousands of geese were overwhelming but not unpleasant. Among the geese and egrets we observed black and whistling kites, night herons, jabirus, snakebirds and other predatory species hunting.
Jacanas trotted across the floating vegetation, weaving a course around the swamp hens and several species of ducks.

After just three nights at Jabiru we travelled west towards Darwin to participate in a 5km run before heading back into the bush. One highlight of our trip along the Arnhem Highway before leaving the national park was sighting our first Kakadu emus, which until then had been conspicuous by their absence, in contrast to areas we often travel in far western Queensland and NSW.