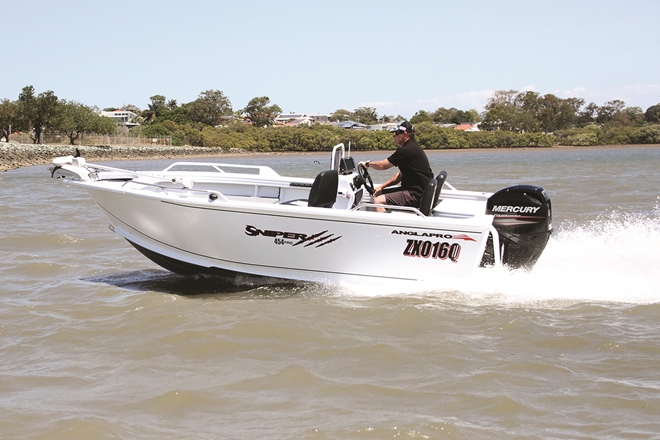 THE Anglapro Sniper 454 Pro side console is not your average tinnie.

This is a big and beamy fishing weapon that doesn’t shy away from expressing its intentions as an affordable go-anywhere, chase-anything boat. I recently had the opportunity to water test the Sniper off Scarborough on a genuinely blustery day. Considering the conditions, I was immediately appreciative of the rugged design qualities and solid build inherent in every Anglapro boat. All-round 3mm aluminium construction ensures this 4.55m boat is no lightweight and aggressive ribbing construction means hull strength is guaranteed.

The Sniper is Anglapro’s ‘all-terrain weapon’ and straight off the bat it lived up to this philosophy. With a stiff northerly wind blowing straight down from Papua New Guinea, we headed west out of the harbour and began copping the sizeable chop smack on the starboard side. The Sniper 454 Pro endured this pounding admirably before we pointed the bow south to scoot towards the Newport canal system for some calm-water video footage.

After the starboard side took on the waves and won, with nary a drop of spray finding its way past the big spray deflectors and reverse chine, we punched the 60hp Mercury FourStroke Command Thrust and skipped over the top of the chop in a following sea. While the 60hp motor fitted was the maximum, performance out of the hole wasn’t rocket-like, but more a smooth and powerful surge onto the plane complemented by a very snappy top end. On the way to the canals, we soon clicked past 50km/h with more to go. At this sort of speed the Sniper felt very planted and stable, using its 2.1m beam and deep-vee deadrise to full effect.

Small changes of direction were handled with aplomb and pulling a couple of doughies didn’t bother either boat or motor, with the torquey Command Thrust Merc pushing the boat around with ease. Once at the entry to the canal system and putting around in smoother water (though we couldn’t escape the bloody wind!), I took the opportunity to walk around the deck snapping a few photos. With a smaller Anglapro Chaser 424 also on hand and running back and forth for photography, its wake didn’t get close to making the Sniper an unstable platform.

In fact, the deep-set floor and high sides with comfortable gunwales on which to lean upon meant that even with a couple of quick direction changes I was never in any danger of overbalancing and going for a swim with editor Ben’s camera (something I was all too aware of!). The raised front cast platform provided an elevated perch from which to take photos as well as hiding a large plumbed keeper tank and storage hatch for life jackets. I approved of the squared-off design at the front of the cast platform, which maximised space in an area that is all too often compromised in the interests of a more ‘curvaceous’ boat design.

Practicality was obviously a core focus in the conception of the Anglapro Sniper 454 Pro, with myriad features aimed at user friendliness and function over form. For example: the capacious composite anchor well is intended to reduce banging and crashing from the anchor over chop; a raised rear cast deck makes life so much easier when fishing three or four-up; and the storage options on that rear deck are optimised by two hatches and a plumbed composite live bait tank that will keep your livies in mint condition.

Ergonomics are spot-on too, with a fairly relaxed driving position and comfortable pedestal seats. The side console features a small windscreen, grab rail, non-slip under tray for phones and the like, switch panel, instrument display and of course plenty of room for mounting at least one big-screen GPS/sounder. The test boat featured a Lowrance HDS-9 and just eyeballing it I’d say you could fit a HDS-5 in beside it. With both pedestal seats mounted down the back, you get a real idea of the deck space afforded by this ‘small’ 4.55m boat.

The Anglapro Sniper 454 Pro is stable, solid, smooth and spacious, with enough room to easily cater for three or four fishos. What more do you want from a bay and estuary fishing boat?

While ready to fish hard straight off the showroom floor at Brisbane Marine, Anglapro differentiates from most mainstream boat manufacturers in offering an unprecedented level of customisation. If you feel there’s something missing or you’d like a feature laid out differently or deleted, Anglapro is only too happy to accommodate.

So to get an idea of what Anglapro can do for you, head along to the Brisbane Marine showroom at 306 Duffield Rd, Clontarf, call 07 3889 3033 or visit brismarine.com.au

Daniel is BNB's subeditor and occasional fish-wrangler. If you've got a great story or at least an idea for one, flick Dan an email at editorial@bnbfishing.com.au
Previous Epic road trip into Kakadu
Next Restrictions imposed in Logan River to contain prawn disease