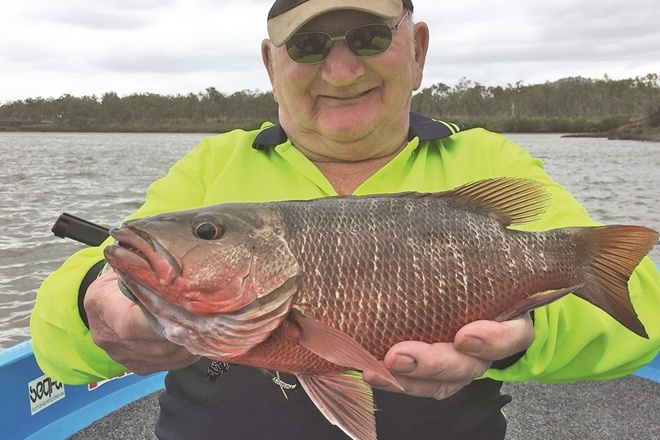 Mangrove jack are on the chew and the author’s dad caught his on a live mullet fished around fallen timber.

WHAT a year 2020 was – bring on 2021. Hopefully we have seen the worst and the world will start to slowly return to normal. The whole COVID-19 saga has affected people in different ways.

Tourism was an industry hardest hit and this has had a flow-on effect, with many small businesses feeling the pressure. Now that restrictions are lifting and the holiday season is here, there should be an increase in people travelling this great country, who will spend time and money in places that have been affected. Central Queensland hot

People will be out and about trying the goodies they got for Christmas, and this will result in an increase of people on the water. To avoid the crowds, either take the time to travel to less-accessible locations or be prepared to fish early morning and late afternoon into the night. Less boat noise can also impact fish movement and usually they will be more willing and aggressive to attack a lure or bait.

If you are fishing during high boat movement, be a little more patient and spend an extra 10 minutes in one location and wait for a reaction bite. You will typically find fish schooled in deep water during the day, avoiding both the noise and increased water temperature. Fish will move with higher water temperature – typically spending cooler low-light periods of early morning and late afternoon patrolling the shallower water then moving deeper as the temperature rises.Central Queensland hot

Normally we spend our time chasing slightly warmer water during cool months, but with higher water temps it can be the opposite, and a degree or two colder can be a trigger for a bite. This can be more obvious on dams where tidal flow doesn’t affect water movement, but wind direction and strength can change the water temperature and where it is located.

Awoonga Dam has been firing recently with multiple fish being caught during sessions, and the average size is on the rise, with fish over 1m starting to be common again. The Calliope River boat ramp carpark upgrade was completed at the start of December and will get a workout over the next few months. Mangrove jack will be a popular target during summer, with the raised water temperature firing them up.Central Queensland hot

Using surface lures early morning and late afternoon will be extremely effective as the sun gets higher, and fishing deeper with hard-bodies and weedless plastics will get results. If you’re keen and brave enough to be on the water just before or after an afternoon storm, you will find jack can be extremely aggressive and willing to hit almost anything offered.

Don’t rule out the use of pillie for bait – at times they can out-fish a live bait or a well-presented lure. Flathead will be around in good numbers on most sand banks and at creek mouths, and the last hour or two of the run-out tide will be the best time to chase them. Whiting are a fish that is not a common target around the region but can be found in good numbers and make for a great feed.Central Queensland hot

Grunter will still be around in quantities throughout the harbour and around the shipping marker pylons. These same pylons will hold plenty of queenfish, with the odd trevally mixed in – the trouble could be finding which of the many pylons are holding fish. A school or two of blue salmon will be appearing in the harbour and deeper sections of the rivers.Central Queensland hot

Also, threadfin salmon will be an option in the Fitzroy River and Port Alma, while barramundi are still off limits. If we get a bit of rain, mud crabs will start to move – they have been around in low numbers, though you will need to work your pots and keep moving them until you can find a couple.

Hopefully everyone has a great start to the new year.

Cheers and happy fishing from Gladstone.

Previous Hop onto the headlands!
Next Holiday action on the Sunshine Coast