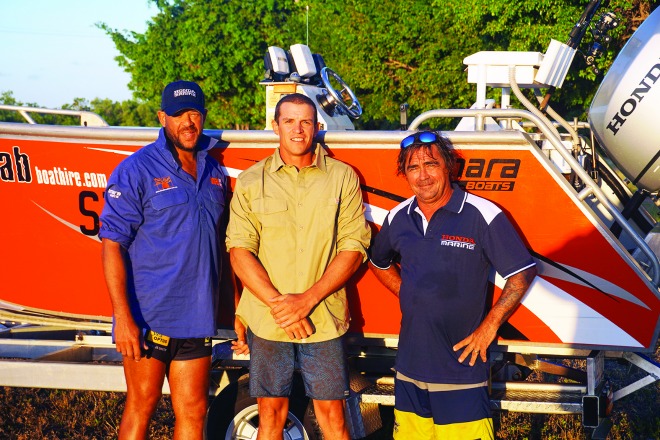 BEN Jefferson, father of two from the Northern Territory, recently won the trip of a lifetime thanks to Honda Marine.

Ben was lucky enough to experience some of Queensland’s best fishing spots and even knock back a few cold ones with cricket legend Andrew Symonds. Towards the end of 2015 and the start of 2016, Honda Marine ran a Facebook and Instagram competition in partnership with Boab Boat Hire that allowed the public to post an unforgettable fishing or boating moment for the chance to win an all-expenses paid weekend adventure in Townsville with Andrew Symonds.

The response from the public was huge, with a wide range of photos and videos posted; ranging from a little tacker’s first catch to the downright wacky and hilarious.

In the end there could only be one winner and that was Ben Jefferson. Ben headed to Townsville on a Friday night for an action-packed weekend adventure with the Boab Boat Hire guys and Andrew Symonds.

Friday night was a blast, with Symmo, Ben, the Boab crew and Honda representative Mark Suttle enjoying a few well-received cold bevvies in the balmy warm tropical breeze and chatting well into the night. Bright-eyed and bushy-tailed at 6.30am on Saturday morning, Ben and the Boab guys headed out to pick up Symmo.

Here Ben had the opportunity to meet Symmo’s family and help him pack the boat for the long day of fishing and boating ahead. Out around Magnetic Island, the boys explored untouched bays and secluded areas that are only accessible by boat.

“I have never been to Townsville, let alone out on the water up there and it was simply beautiful… the sights were just magical,” Ben said.

“The places we explored really were a small piece of untouched paradise, and getting to share the experience with Symmo was second to none.”

On Sunday, Ben got to enjoy the Townsville Fishing and Outdoor Expo, where he created the ultimate wish list of boy’s toys. When asked about the weekend he said it was an absolute blast and he could not have asked for a better bunch of blokes to go with.

“The Boab crew really knew their stuff and the Honda engines were so quiet that they did not interrupt the serenity of the beautiful scenery,” Ben said.

Keep an eye on the Honda Marine Australia Facebook page for more competitions and to join in the conversation. Don’t forget to share your photos with Honda’s community of fishos. www.marine.honda.com.au