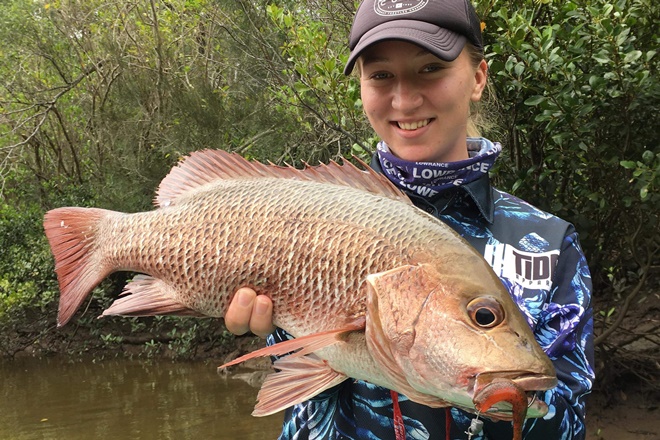 Hot bites on offer around Bundaberg

The Burnett River fished very well over the weekend with awesome reports of grunter, bream, flathead and whiting!  With the smaller tides this weekend it will pay to fish with very lightly-weighted baits and soft plastics.  With the very little run in the tide, making your bait or soft plastic look as natural as possible will be very important.  Again, the change of tides will be your period for hot bites. Low tide will be around 7am in the mornings and high tide will be around 2pm.  It will also be well worth throwing your crab pots in.  We’ve had some really good reports of some tasty, full crabs caught in the past week.

The Elliott River was fishing hot last weekend!  The whiting were on the chew.  Reports of 40cm+ models were caught!  The Jack were on as well.  Most were caught on 3” Zman Minnowz slow-rolled out of snags.  The crabs were also in good numbers.  Again the quality of the crabs was very good.  Don’t forget to throw your cast net in because a few prawns are starting to show up as well.

Both the Baffle and the Kolan have been the standout fishing spots in the last week!  The number of mangrove jack being caught has been crazy, with 50cm models regularly being caught!  The standout technique to catch them has been again slow rolling 3” Zman Minnowz over rock bars and out of snags.  Also mixing it up throwing Jackall Squirrels and soft vibes is a deadly way to catch them as well.  Not to forget, there’s still trophy-sized grunter being caught mostly on 5” Gulp Jerk Shads with fairly light fluorocarbon leader.  The crabs have been on the move in these systems too, so don’t forget to throw the pots in.

Lake Monduran is still firing!  With the northerlies forecast for the rest of the week the barra should be ON!  Fishing the bays and points where the wind is blowing into will be the hot spots.  With the forecast predicting overcast conditions, the bite time might be longer this weekend but definitely aim to fish either early in the morning or late afternoon.  Jackall Squirrels have again been the standout lure.  Slowly twitching them back to the boat with long pauses in the strike zone is surely an effective way to make the barra play.