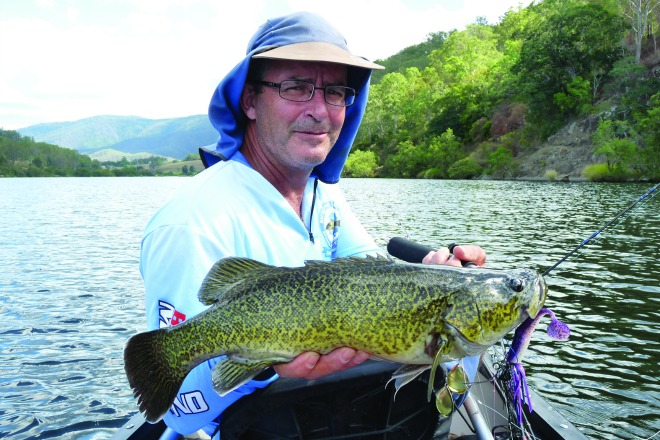 Andy ‘Prof’ Bullen with a lovely cod hooked on a Bassman Spinnerbait.

APRIL presents a bit of an autumn fishing transition period where some of the bigger bream move downriver and as the month progresses the flathead move up.

Tailor and school jew also come out to play a bit more in April. All in all it’s not a bad month for fishing, and of course the time I dislike most, winter, is just around the corner, so it’s best to get out now while the temperature is bearable.

Autumn is a good season to be on the water because most of the summer heat is gone and you can put more hours into catching fish without your body going haywire. In the heat I cramp up badly and my hands and feet just fall apart and don’t want to play the game but in the cooler (but not truly cold!) weather I’m all good.

Whiting, bream, flathead, trevally and bass are taking surface lures with gusto and even small whaler sharks are hitting surface lures. Crabs are still around in droves and the bigger bucks are getting into the traps a lot more. Previously it was just the small ones and heaps of jennies, and most had soft shells.

Recently a number of the gutters have reformed and the fish are holding in them. We just need this south-easterly wind to rack off.

The big swells have meant it’s been a mission to fish outside of the rivers, but a good thing about the swells is the blackfishing on the walls has been very productive. In the Evans River, the Bream Hole has also been working for blackfish. You could even try the town side of the bridge because they like to congregate there when the tide is running in after a big blow.

Whiting fishers just have to gather yabbies from the yabby banks near the Riverfront Kiosk & Cafe at low tide and then fish the run-up tide. Night-time is best for chasing whiting because there is little traffic and no swimmers to upset the fish.

Flathead will be found in the same spots as the whiting and will eat the same bait.

Whiting, flathead and bream will be chewing a little upriver from the bridge and flathead and whiting will also be caught between the island and Iron Gates.

I would set my crab traps just a bit downriver from Iron Gates and then work my way upstream. Most crabbers fish further upriver but you may be surprised at the number of crabs in the lower reaches.

Out in the deep blue, once again mackerel are there one minute and gone the next. Sharks are getting their fair share in taxes. One of my informants hooked four fish but only landed one.

Slimies and yellowtail are great baits if you can’t get a hold of live legal size tailor. Halco lures are also doing some damage to mackerel stocks, but make sure you are now using heaver single-strand wire because the fish are getting bigger.

Snapper, kingies and pearl perch are also being caught. The fishing can be spectacular because tailor and jew are usually out and playing the game.

On the bass front, things are a bit tough because the rivers up the top end are running chocolate brown after the recent rain. At the time of writing the rivers had not had time to clean up.

I fished around Coraki with my mate Kevin Davis and yep I now own a doughnut franchise after losing one fish at the boat and getting just three bites all day. Kev caught two small bass but things were tough. Adrian Melchoir went out as well and landed just a few small fish, so until the water quality picks up thing are going to remain rough.

Speaking of bass, you would likely know how much I love Bassman Spinnerbaits because I have been writing about them for a long time. They are my number-one bass catcher. Well recently I felt the desire to take a look at how Bassman Spinnerbaits are produced, so I gave Glen at Bassman a call. Glen gave me the OK and we had a good talk about how he acquired the business and how much it has changed since he and his wife Sue bought the naming rights in 2002/3.


Bassman Spinnerbaits is a family owned and run business, with Glen and Sue putting in many hours a week to keep up with the demand for this great product. Bassman also offers custom-made spinnerbaits and I have seen many fishers order their own colours. I have even called Sue requesting colours I want to try.

When I fished the Flathead Classic on the Gold Coast I ordered special colours just for flathead fishing. Believe me, flathead do love spinnerbaits, as do bream, so being able to order customised secret squirrel coloured lures is a fabulous service. Going through the production process from jig heads to the finished product was an eye-opener. It’s all hands on with very few machines used. With all the fiddly bits involved it would take me all day to produce just a couple of products. Only top-quality components are used in the making and they are available in 1/4oz, 3/8oz, 1/2oz and 5/8 sizes. The 3/8oz is my preferred weight and my favourite colours to use in the Northern Rivers area are 7, 25 and 31 but don’t discount any skirt that features purple because it was the best-performing colour over summer.

Bassman Mumblers have achieved a great following in recent times, and Glen reckoned I should add a soft plastic paddle tail to the end of my Mumblers for even better results. He then showed me how to rig one on the trailer hook. I’m going to add plastics to my spinnerbaits as well now to try to get a better reaction bite with the poor water quality. I also asked Glen about winding rate.

Normally I count down five seconds and then start my slow wind but Glen suggested I let the lure sink to the bottom and then wind until I feel the blades start to turn over. He said I could also wind fast at first and then slow down, mixing it up until something works.

Bassman Spinnerbaits work on everything from bream to Murray cod, and trust me, many a cod has had a taste. Carl Jocumsen is a great believer in Glen and Sue’s product.So much so that he uses them on the American bass scene and has even worked with Glen to produce a new spinnerbait called the Bassman Shorty. I had a look at the Shorty and I reckon our bass will be all over this lure in no time. The colour range is enormous and Glen is forever trying new ideas to make better products for us fishers.

One thing you have to remember is Glen does listen to what anglers have to say. He also fishes a lot of competitions and passes on his knowledge to those who want to learn more about bass and cod fishing. I know this because I pester him a lot when I want special colours. Believe it or not, a few of the guys I fish with now have their custom colours listed in the Bassman Spinnerbait range. I want to thank Glen and Sue for letting me pester them and take a look at the making of the Bassman range. It was a real eye-opening experience and I hope Glen and Sue stick around making spinnerbaits for years to come. For more information, visit bassmanspinnerbaits.com.au

‘Til next month, remember: limit your kill, don’t kill your limit. Tight lines and smelly fingers.

Squidgie thinks he was born with a fishing line in hand. His father and uncles were mad-keen fishers and spearfishers, he learnt his trade in the Wollongong area as a kid and is still learning to this day in his current area of the far north coast of NSW. Bream and flathead are the main species Squidgie targets on soft plastics or hard-body lures. He hasn’t used bait in about 15 years. Any queries, just email squidgie@bigpond.net.au or phone 0402 415 487.
Previous 2016 Gold Coast International Marine Expo in May
Next Mayhem Catching Pelagics on Surface