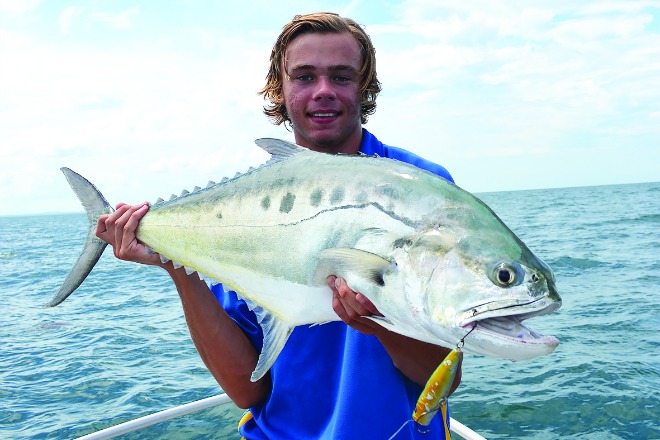 WHEN it comes to fishing, particularly sportfishing, nothing quite compares to the adrenalin rush generated by catching pelagics on surface.

The surface strike of a pelagic fish has to be seen and felt to be believed. Over the past two years I have readily gone topwater fishing for flats fish such as whiting, and finesse fishing of such a visual nature definitely adds another dimension to fishing. Progressing from flats fish, I began tempting fish including barramundi and mangrove jack to wallop surface lures, and then recently I came across some unforgettable surface fishing that left me more eager than ever to get back out on the water.

A rather significant amount of rainfall in the local area had most of the rivers and creeks flowing fresh during the beginning of February, limiting the fishing options. Heading offshore was one of the only ways to escape the silted water, but with constant wind and drizzling rain it seemed like waiting it out was the only thing to do. Sure enough, a window of good weather appeared, so I sprang into action and prepped the boat and gear for a run to a small reef system situated offshore from Bundaberg.

It was great to finally get out of the house and hit the water. I intended to get stuck into some bottom fish such as tuskfish and grass sweetlip, which are fairly common catches around this reef. After a fairly slow start to the morning I spotted a school of medium-sized queenfish slowly moving about on the surface. The fish were extremely spooky and showed little interest in anything I threw at them.

I decided I’d tie on a medium-sized surface popper in a final attempt to capture the interest of these frustrating queenfish. It took only two casts before my small popper was monstered by a fish that met no school-sized queenfish’s description and was instead a whopping giant trevally.

As the fish sped off with no intention of slowing, I didn’t have high hopes for the light-gauge treble hooks that connected me to this brute of a fish. Sure enough, the fight was short lived.

One very bent treble hook was to blame, but before I had time to sulk, the school of queenfish began busting up within casting range of our position, and with one good treble hook I did what was only natural and cast into the action. Thinking it was a school of ‘manageable’-sized fish, I popped my way through the commotion.

Once again the smaller queenfish took little to no interest in my perfectly placed lure, but as I blooped it beyond the frenzy it was engulfed by a queenfish well over a metre in length. I thought to myself, ‘of course, I manage to hook two of the most brutal fish possible on the smallest, weakest popper while trying to catch the smaller schooling fish.’

With my drag set fairly light, I stayed connected to the massive queenfish for far longer than I’d anticipated and had actually begun steering the fish back towards the boat when it decided to use one last burst of energy.

In one great leap, the stunning chrome specimen straightened the second treble hook, leaving me devastated after a hopeful turn of events.

After two hook failures, I think it’s fair to say I had learnt my lesson, and ignoring the actively feeding fish surrounding me I tied on a slightly larger popper, which most importantly was fitted out with two very strong single hooks.

Fishing with single hooks as opposed to trebles is almost a form of insurance, or should I say reassurance, when hooked up to big fish. Though the hook-up rate can be lower, once connected single hooks can be reliably pinned in the hinge of a fish’s jaw, allowing for minimal error during a fight as well as a much easier release process that is ultimately better for the fish’s well being.

At last I was casting a lure that I knew could withstand the punishment of the big pelagics I had discovered were around. Countless casts for minimal interest had me wondering whether I would encounter another strike, but I persisted, casting long and hard until I got another shot at making all the effort worthwhile. The conditions had really chopped up and I was beginning to tire after a long and very frustrating day, but as ‘final cast’ came to mind, my popper was smashed by a speedster of the sea, a spanish mackerel.

Spanish mackerel have the ability to reach staggering speeds and often don’t shy away from unleashing this incredible power. Living up to my expectations, the fish had my reel screaming and it wasn’t long before I began to wonder if it was actually going to stop or whether it would continue on its course to New Zealand. Soon enough, however, the fish slowed and I was able to recover some lost braid, before the fish took another howling run next to the boat, this time heading back towards the coast. Luckily, the toothy critter was perfectly hooked in the corner of the jaw by the single hook, which made for a clean fight and an unscathed leader once the big mackerel was brought aboard.

Conditions continued to worsen, so I headed home with head held high after persistence paid off in the dying minutes of my offshore adventure. Upon reflection, achieving so much topwater activity had me readily planning a far more successful approach for future trips.

As the unpleasant weather returned the following day, I began religiously checking the forecast for a drop in wind speed. About a week passed before a shift in the weather arose, with light southwesterly wind appearing for a very short time frame in the morning, but it was enough to have me hooking on the boat and making a mad dash out to the same reef system in the hope of more surface fishing excitement.

This time carrying more substantial tackle, fellow angler Matthew Horvath and I positioned the boat in about the same position as the previous trip before commencing long and repetitive casts. Using a continuous blooping retrieve, our poppers were sure to get some interest, and soon enough Matt’s popper was smashed and he was hooked up to a hard-fighting fish.

It’s important when hooked up to big fish such as trevally or queenfish to find the balance between taking your time and maintaining steady pressure. When rushing, fish can be lost to failed knots, line or even rods and reels, all of which could be prevented by letting the fish tire under steady pressure. When battling brutes such as giant trevally, having high-quality gear is almost essential for landing monstrous fish.

Associated with the quality of your gear is the trust that your extensive preparations will not let you down when fighting a trophy fish. Trust is something Matt certainly had in his 5000-size Shimano Stradic reel as he played what we thought could be a decent-sized giant trevally judging by the fish’s endurance and ability to find energy when most fish would be exhausted. Finally, as a heavy shower came across the water, he got the fish to the boat and as predicted it was a cracking giant trevally weighing just short of 10kg, which made for an awesome start to the day.

After a couple of photos the fish was released in good health. Only minutes later, Matt was hooked up to something far bigger. The fish took off in extraordinary fashion, leaving Matt’s reel screaming and giving him only one option: to hang on! With line quickly disappearing from the spool, a slight tightening of the drag was necessary but showed little impact on the fish after another powerful run. Soon the fish turned and we finally felt as though Matt was winning the battle.

But the fish had other intentions, taking off in all directions and sending Matt on a number of laps around the boat. About 10 minutes had passed and both Matt and the fish were showing signs of fatigue, but with a final push the fish surfaced and I was able to get hold of the 20kg giant trevally. We were ecstatic to have landed such an awesome fish on only 30lb tackle in an area that we’d never anticipated could produce fish of such savage proportions.

After capturing some photos of the memorable fish we sent it on its way and it gave us both a face full of water as it kicked goodbye, strong and ready to put another angler’s stamina to the test. A change of tide and an increase in wind speed seemed to have an effect on the fishing, and about an hour passed with barely any inquiries. To break up the day, we tried fishing the reef using soft plastics, which had been successful on previous trips, but unfortunately they didn’t perform on this occasion. Another rain front was building and conditions were worsening but we decided to persist with the surface fishing until the early afternoon, hoping the rain would hold off for just another hour or so.

Out of nowhere, a whopping queenfish smacked my popper and began a series of spectacular aerial attempts to throw my lure. Because my single hook was pinned perfectly in the corner of its jaw I was able to comfortably fight the fish and I had no concerns about losing this one. After more outstanding leaps just metres from the boat, we landed the 110cm queenfish, which had provided an awesome and rewarding fight.

If I had to choose the one thing about surface fishing that I’d learnt to be the most valuable, it would have to be the power of persistence. Casting for hours on end can no doubt become extremely tiring, especially in choppy seas, but when you finally hook up to a fish it becomes all the more worthwhile. Surface lures are attractive to an array of species that are generally hard-fighting sportfish.

It is quite rare to hook up to an unwanted specimen other than the occasional barracuda or hungry reef shark. Not only does surface fishing present opportunities to hook up to sought-after species, but it also gives the angler a visual experience that is truly one of a kind. While a strong southeasterly batters the coast, I am yet again awaiting my next opportunity to head out and tempt more cracking big fish on surface lures.

Joel is blessed with the fish-rich coastline and waterways surrounding the Bundaberg region. With an array of options and possibilities around, he favours the shallow flats and small creeks and specialises mostly in lure fishing. Joel loves to broaden his abilities with new concepts and techniques, so feel free to email him at jmj-31898@hotmail.com
Previous Hot Hints for Some Autumn Fishing Action
Next How to Catch Mulloway