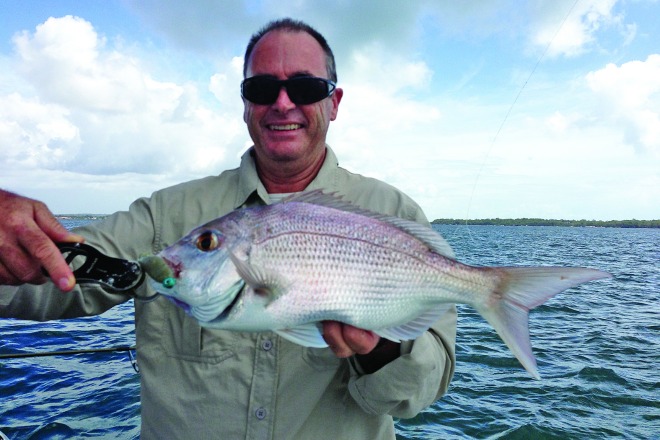 THE biggest trick to catching Moreton Bay snapper at the moment is using the right technique at the right part of the tide.

Fishing around the Moreton Bay islands on the rubble grounds in 2-6m of water has produced the most snapper.

Over the past month it’s been a bit of a mixed bag on the fishing front. We’ve been chasing flatties, snapper and a few sweetlip on the rubble grounds.

Casting 3”-4” soft plastics on 1/8-3/8oz jig heads has enticed all the above fish. They’re all mixed up and swimming around on top of the rubble grounds. The best time to use this technique is when a bit of current is running.

Another technique that’s snared a few fish is anchoring a couple of hours before and after the turn of the tide and using bait.

So if I’ve been drifting up and down the rubble ground for hours and picking up fish on soft plastics, as the tide starts to slow I will anchor in that area, get a good berley trail going and send out some lightly weighted baits.

The baits that have worked best for us are simply half a pilchard on a two-hook rig (two 3/0s ganged together) and fresh squid or green prawn on a single long shank 2/0 or 3/0 hook.

But watch out for the bull sharks. When you find the fish you’re definitely going to find the sharks, and most are about 2m long.

Unfortunately they have a tendency to steal any decent fish you get a hold of, which is just part and parcel of fishing in these areas.

The only thing I’ve done to try to combat the sharks if they become a real problem is to go up to 15lb braid instead of 10lb to get the fish in a bit quicker.

Some decent fish are out on the rubble grounds at the moment, so just because you hook something that takes off and runs like a bullet, don’t immediately think it must be a shark or ray.

This happened to a client Chris the other day while fishing with 10lb braid and soft plastics for snapper.

Chris and his son Hayden were flicking their plastics around and picking up a fair few undersize snapper as well as the odd legal one for dinner and the occasional bream, sweetlip, tuskfish and flathead too.

We had just finished a long drift down the rubble grounds, so I headed all the way back up to the top to make another drift. Chris made his first cast and as the plastic was sinking to the bottom it got smashed and he said it wasn’t a bad fish.

Next minute it took off like a rocket and braid was peeling off the Wilson Magnum reel at a rapid rate.

The sound of that drag was awesome but we told Hayden to hurry up and get his line in so we could chase the fish down because at the rate the line was coming off the reel we were at risk of getting spooled.

We began to chase the fish but every time we got close it would run hard and take a heap of line. The only thing Chris could do was hold the rod tip up nice and high because with the amount of line he had out, rubbing off on the bottom was his greatest risk.

The fish made a heap of cracking runs and with the rod bent over double and the drag screaming Chris was having a heap of fun.

Luckily the fish headed in a totally different direction to where all the sharks had been and stayed up in the shallows.

There’s no big structure in these areas so we didn’t have to worry about the fish wrapping us around a large rock, which was a relief. We were slowly winning the fight and Chris got the fish close enough to the surface for us to have a look.

The water was very dirty and at first we thought it was a cracking snapper of about 70cm, but then the fish took off again, heading for the bottom and running as hard as it could.

This fish just wouldn’t give up and it gave Chris heaps. At this point we started to think that maybe it wasn’t a snapper.

Then the fish headed into the deep water (7m), turned on its side and started doing a few circles under the boat with some big strong tail beats.

Slowly but surely, Chris was winning the fight. When he finally brought the fish to the surface it turned out to be a cracking Moreton Bay GT.

I slipped the net under it, lifted it into the boat and we got a couple of good pics of Chris and his first-ever trevally, which measured 73cm.

You really need to pay attention to what’s going on to hook and land fish like this. One sure thing is, just because you’re catching a lot of little fish doesn’t mean bigger predators aren’t there.

Just because you hook a fish and it takes off like a shark, make sure you take the time to play it and find out what it is because it could be that big snapper or GT you never thought you were going to hook in the shallows that day.

Another sure thing is that it’s really important to have good, not necessarily expensive, gear to land quality fish.

Be sure to check all your knots are spot on and your braid and fluorocarbon leader are free of scuffs and cuts because that next fish could be a trophy specimen.

If you would like to join me on a charter, phone 0433 732 310, check out www.moretonbaycharters.com.au or visit the Moreton Bay Charters Facebook page.